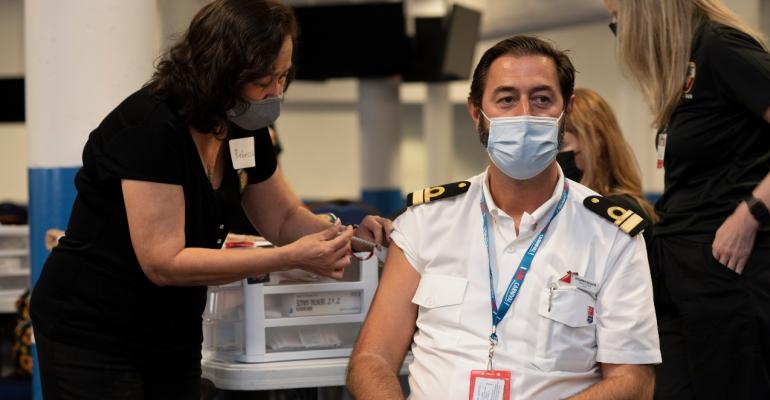 Carnival crew members were vaccinated for COVID-19 as part of a cruise rally at the Port of Galveston
A rally in support of cruising gathered officials of Carnival Cruise Line, the Federal Maritime Commission, Galveston city and port on Monday as crew vaccinations for COVID-19 began.

With Carnival Breeze and Carnival Vista providing a backdrop, speakers described the dramatic effect that the 14-month pause in operations has had on local businesses.

Crew from the two ships also received COVID-19 vaccinations on site from the University of Texas Medical Branch (UTMB) at Galveston.

As earlier reported here, some 350 crew from Carnival Breeze and Carnival Vista were expected to get their first dose of the Pfizer vaccine on Monday and Tuesday.

Galveston closely follows PortMiami and Port Canaveral in getting shots into the arms of these essential workers.

Sending a strong and unified message

'Today was yet another significant milestone in our efforts to resume cruising in the US,' Carnival President Christine Duffy said. 'We’ve said all along that we would like the cruise industry be given equal treatment of other travel and hospitality companies and this event sent a strong and unified message that we need to start sailing again.'

Added Galveston Mayor Craig Brown: 'Cruising is so critical to the Galveston economy and today’s event clearly demonstrated our community’s desire that cruising return to bring much-needed visitors and jobs back to our community ... The time is right to resume cruising and all the wonderful benefits it brings to our city.'

The Port of Galveston is the fourth busiest North American cruise homeport. In a normal year cruising generates $1.6bn for Texas and 27,000 jobs statewide.

Carnival is the No. 1 cruise operator from Galveston and the only line with three year-round ships there. In a normal year, Carnival Vista, Carnival Breeze and Carnival Dream operate 175 voyages, carrying an estimated 750,000 passengers.