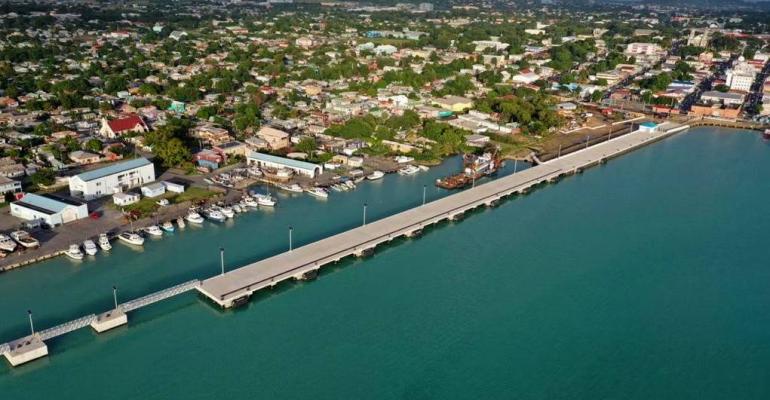 GPH invested $72.9m in its Caribbean ports in 2020 including a fifth berth at St. John's, Antigua (pictured)
Global Ports Holding reported a wider annual loss in 2020 due to the suspension of cruises, resulting in a 76% drop in passenger volumes, whilst Global Liman İsletmeleri, a wholly owned subsidiary of GPH, is seeking to refinance a $250m bond due later this year.

‘In the near term, the outlook for the cruise industry remains highly uncertain,’ CEO Emre Sayin said.

While GPH expects an increase in cruise activity in the second and third quarters of 2021, ‘it is, as yet, unclear how the ramp-up of cruise operations globally and on a regional level will shape up,’ Sayin added.

Last month subsidiary Global Liman İsletmeleri launched a scheme of arrangement in connection with the refinancing of a $250m eurobond, which is due November 14.

Through the scheme of arrangement, the group is taking steps to stabilise its liquidity position and manage its long-term debt obligations by extending the Eurobond's maturity date and related terms.

GPH said it is in discussion with key noteholders who have formed an ad hoc group which has made a counterproposal. The next interest payment will fall due in May.

In its annual financial report statement issued Friday the port group said it 'believes that these discussions are likely to result in amendments to the terms of the proposed refinancing and the scheme timeline prior to the extended early bird deadline of March 19, 2021.’

GPH completed the $140m sale of Port Akdeniz (one of its two commercial ports) to QTerminals in January as it moves to become a 'pure play cruise operator in what remains a structural growth industry,’ commented Sayin.

The GPH board is considering its options with regard to Port Adria in Montenegro — the other commercial port in its portfolio — including a potential disposal.

During 2020, GPH invested $72.9m in into its new Caribbean ports including the completion of a new cruise berth at St John’s, Antigua. $3.9m was spent across the rest of the cruise portfolio earlier this year, with $2m spent in Barcelona on terminal improvements and $1.5m in Valletta on investment into the waterfront infrastructure.