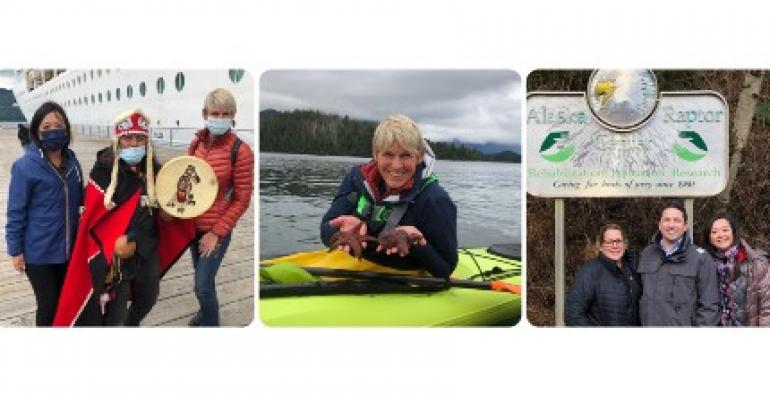 From left, Tracy Quan and Wendy Lindskoog with a Tlingit man greeting Serenade of the Seas, Lindskoog with starfish on a new kayaking tour from Sitka and Preston Carnahan with Helen O'Connell, left, and Quan, right, at the Alaska Raptor Center, where he serves on the board
Destination development at Royal Caribbean Group now involves an integrated, holistic approach in places like Alaska.

This is driven by Michael Bayley, president and CEO, Royal Caribbean International, who oversees destination development at the corporate level.

Alaska is one of the company's most important and growing destinations, hosting some of its best ships — with the Quantum class already there and Edge class to come.

Team Alaska — with executives in destination development (Preston Carnahan), government relations (Wendy Lindskoog), corporate responsibility (Helen O'Connell) and communications/stakeholder engagement (Tracy Quan) — is an 'informal structure that does real things,' bringing together areas that acted independently before but now have a central focus point in the organization.

Building on the experience of introducing Oasis of the Seas in the Caribbean a decade earlier, before deploying the 168,000gt Ovation of the Seas to become the largest cruise ship in Alaska in 2019, Royal Caribbean deployed Carnahan, director, business and destination development, West Coast, to Seattle, where he laid the groundwork and remains based. 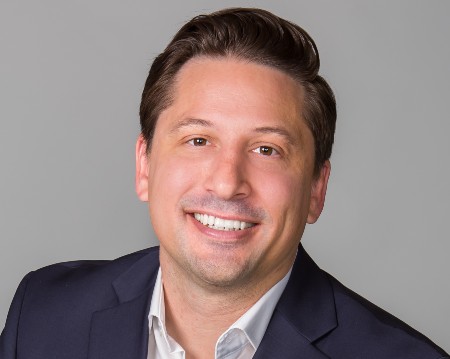 'Every day we need to be engaged with everyone involved in our business, big or small,' Preston Carnahan said

'We really wanted to be proactive in addressing issues that accompany increased passenger capacity,' Carnahan said. 'This means understanding the impact those ships have on communities, both positive and the areas for improvement.'

To do that, engagement is critical, he said.

'Every day we need to be engaged with everyone involved in our business, big or small. We're working with elected officials, shop owners, tour providers. More than ever, we need to put our faces [out there] and humanize what we do.'

'When we show up here, it's about listening and it's about joining — getting involved with chambers of commerce and visitors bureaus, really listening to local government at meetings, what they view as opportunities for economic development, what they view as their challenges,' according to Lindskoog, AVP government relations, Alaska, who signed on with Royal Caribbean Group a little over a year ago, based in Anchorage. She brings 18 years of government relations experience in Alaska, from working in the state legislature as press secretary to Alaska Railroad to BP.

'The best thing Preston and I can do, representing a big company that can provide economic development and challenges, is getting ahead of those conversations,' Lindskoog said. 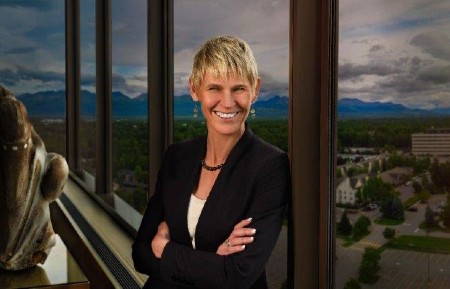 Aiming to be a partner of choice

Team Alaska's spirit and philosophy involve engaging as an invited guest, she said, 'lucky enough to operate in these beautiful and wonderful places. This drives our engagement and how we want to be viewed as a partner of choice in Alaska or any other destination.'

Serving in the community is part of that. Carnahan is a board member of Sitka's Alaska Raptor Center, while Lindskoog is on the board of the Alaska SeaLife Center in Seward and the executive committee of the Resource Development Council in Anchorage.

O'Connell, AVP corporate responsibility, was deeply involved from a philanthropic standpoint during the shutdown, according to Quan, AVP external affairs, corporate communications.

'Because we had this structure in place before the pandemic, we were able in 2020 to understand the devastating impact of the pandemic on the communities,' Carnahan said. The company focused on three areas for giving: food insecurity, domestic violence and schoolchildren — for example, providing laptops to kids in Hoonah for classwork when schools were closed.

'Some of these Southeast Alaska communities had nothing,' Lindskoog said. 'Some shops were boarded up ... If they don't have revenues, they don't have funding flowing into social services needs.'

As an outgrowth of this, the RCL Cares initiative was expanded from working with travel advisor partners to add a destination focus. Through this, Royal Caribbean Group provided funding for the Alaska Travel Industry Association Foundation to award more than more than $745,000 in grants to over 65 tourism businesses and community organizations to assist in their pandemic recoveries.

'We understood tour operators and many others we rely on were struggling and we wanted to fill in the gaps and ensure that the people who've provided experiences for our guests for many  years were still around when we come back,' Carnahan said. 'These are business grants, not loans. Maybe they helped businesses keep people, pay rent, do maintenance. We've gotten a lot of positive feedback.'

Team Alaska was also instrumental in the myriad details of returning to service in Alaska with health safety as the overriding priority. This involved helping forge the memoranda of understanding with each port and the state to satisfy the US Centers for Disease Control and Prevention's conditional sailing order, communicating protocols to communities and legislative work supporting the Passenger Vessel Services Act waiver. 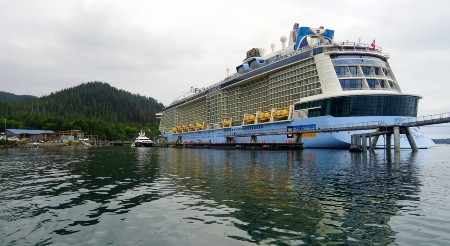 Yet another important area on the destination development front has been the Sitka Sound Cruise Terminal dock expansion, whose first phase was completed before ships returned this summer. The expansion enables Sitka to handle Alaska's largest cruise ships — two simultaneously now. Passenger movement capability was improved, with four bus lanes and separate areas for shore excursions and for the free transfers to town.

Team Alaska works closely with the Sitka family behind Halibut Point Marine Services, which owns the pier, providing financing support with a minority ownership stake together with Ceres Terminals. This is a long-term relationship, Carnahan said, that's viewed as an investment in the passenger experience whose return will be measured in guest satisfaction scores.

Work with the Native corporation Shee Atiká Inc. led to a new kayaking tour with a menu of customizable options that embarks from an island a short boat ride away. Recently the Sitka City Council approved a land lease adjacent to the pier so there's more exciting news to come on tours, Carnahan said, adding that program is going to expand greatly in the next two years, continuing to work with the Native corporation.

By 2024, he said, Sitka will have the most modern and up-to-date tour program in Alaska.

Before that, in 2022, a crab restaurant and brewery are planned to open on the waterfront.

Ovation of the Seas began calling Sitka in August and the Royal Caribbean Group alone will go from one ship in 2019 to bringing more than 200,000 passengers in 2022, including those of Celebrity.

2022 looks like a record year in Alaska, and Carnahan said Team Alaska is passionate about the company's growth and providing great experiences for passengers. The only way to ensure sustainable growth, he added, is if communities invite the company back.

When it comes to destination development, Lindskoog said: 'I'd like to think we're establishing a playbook to do it right.'