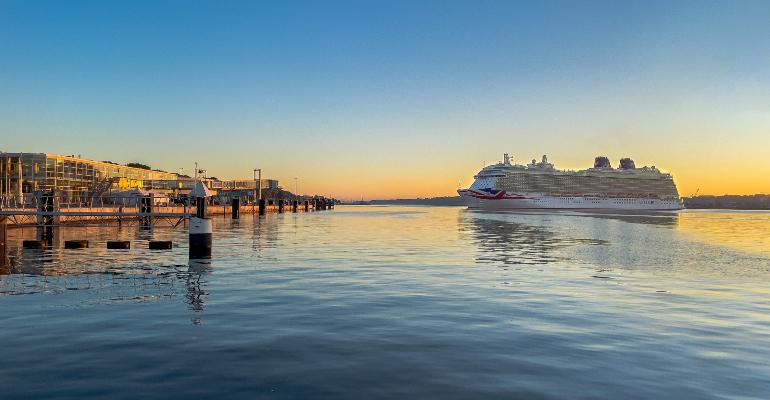 Britannia approaching Ostseekai at Kiel. She will call at the port twice this year, in May and September

The Port of Kiel expects another good season this year resulting in 218 cruise calls, said its MD Dirk Claus this morning as part of a presentation reflecting on last year's results.

2020 had been forecast to become a record season for Kiel, with 200 calls and 880,000 passengers, but aspirations were dashed owing to the pandemic.

This year, a number of larger vessels are scheduled to arrive at Kiel on multiple occasions making the gross tonnage of arriving ships similar to 2022.

For 2023, the choice of routes and destinations approached from Kiel will be slightly broader.

Moving into the future, Claus expects Kiel to settle on between 200 and 250 cruise calls annually.

Impact of the war in Ukraine

According to the port, last year’s promising results were the result of ‘intense planning’ with international cruise operators. While 11 calls were cancelled owing to the conflict in Ukraine and the resulting loss of St Petersburg from itineraries, nine were newly added as a result of rerouting by operators.

Looking ahead, there will be a strong focus on greener shipping with Claus hoping that between 60 and 100 calls can be supplied with green shore power this year.

He stated that Kiel will continue to look at strengthening shore power in line with its corporate sustainability strategy to lower carbon emissions.

Work on the new Ostuferhafen shore power plant is expected to conclude towards the end of this year, resulting in Kiel being able to offer shoreside connectivity at all its ferry and cruise terminals from 2024.

Along with this €17m investment, a further €2m will be invested to install solar arrays. The systems, which will be fitted on roofs at Kiel Port, are intended to cover up to 30% of the port's electricity requirements in the long term.

MSC Euribia and AIDAnova: the largest vessels to call

The largest ships to call will be MSC Euribia and AIDAnova. At the other end of the scale, the 10,417gt Ocean Majesty will visit Kiel on six occasions while chartered to Hansa Touristik. The vessel, which celebrates its 57th  anniversary this year, is popular with the German source market. One of its calls is scheduled to occur on June 18 during the Kieler Woche sailing festival which will run from June 17-25. Traditionally, this marks the peak of the cruise season with this year no exception: 22 calls are expected by Kiel at the same time as the event takes place.

While the highest number of calls is expected between mid-April and the end of September as usual,  some ships will continue to call later in the year. AIDAnova’s last departure is scheduled for November 4 whilst December 20 will see Phoenix Reisen's Amera arrive at Kiel as part of a pre-Christmas itinerary. The season will draw to a close a few days later with Spirit of Discovery on December 29.

As in previous years, Ostuferhafen outside the city centre will be heavily utilised by MSC Cruises and most other cruise ships will arrive at Ostseekai.