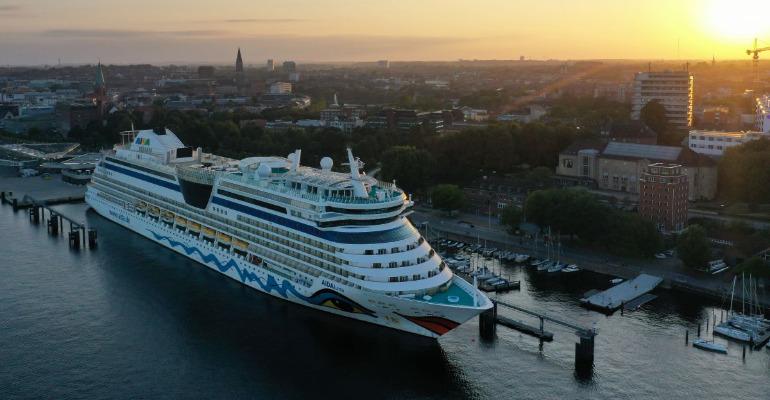 The Costa Group, including AIDA Cruises, will be Kiel's largest cruise client in 2022 (Pictured: AIDAluna in Ostseeka)

The Port of Kiel is scheduled to receive 241 cruise ships and aims at doubling the number of calls supplied with shore power by the end of 2022, according to the Port of Kiel's Dr. Dirk Claus.

Speaking this morning, the MD and CEO noted, ‘The Port of Kiel is on a good way back to pre-COVID cruise tourism volumes and facing an exciting season with significantly above 200 cruise ship calls this year.’

Costa Group is a major client

Of the 241 cruise calls reserved so far at Kiel port this year, the Costa Group – including AIDA Cruises – accounts for 89, making it the port’s largest customer. Kiel will again handle mainly turnaround calls from German-speaking countries plus northern Italy in 2022, although 26 reservations so far account for transit calls.

The cruise season will commence in April, peaking in June during Kieler Woche when up to four ships will be handled simultaneously. On June 11, five ships will be at the port at the same time.

Investments planned for the years ahead will focus strongly on sustainability, in line with Kiel's ambition to become CO2-neutral by 2030.

Among other measures, a further cold ironing plant will be set up at Ostuferhafen which will be made available to cruise ships handled at berth no. 1. The project will get underway this year at a cost of €14m.

Claus remarked that ‘the port aims to supply 80% to 85% of all cruise ship calls with shore power by 2025,’ as it endeavors to take a pool position in cold ironing across Europe.

Claus outlined on January 20 that the Port of Kiel has come through the pandemic well achieving a break-even financial result in 2021, after slight losses in 2020, and has even been able to create new jobs.

He went on to describe Kiel as ‘among Northern Europe's most frequently called and successful cruise ship ports in 2021,’ after recording a total 134 cruise calls carrying 289,000 passengers versus 34,500 passengers in 2020. However, he emphasised that without COVID-19, a volume of up to one million cruise passengers ‘would have been realistic.’

Hygiene concepts implemented both by the port and the cruise lines proved successful, Claus went on to add, highlighting calls by MSC Cruises’ MSC Seaview carrying 3,000 passengers, which he described as ‘handled without any complications’ at berth no. 1 at Ostuferhafen.

Ferry operations to Norway, Sweden and Lithuania recovered quickly, with a total passenger volume across ferry and cruise reaching 921,796 last year. The figure is an almost 50% rise on 2020, which saw 517,540 passengers pass through the port.

Kiel's cargo segment prospered, both in terms of rolling cargo and bulk cargo, growing almost 10% on 2020.