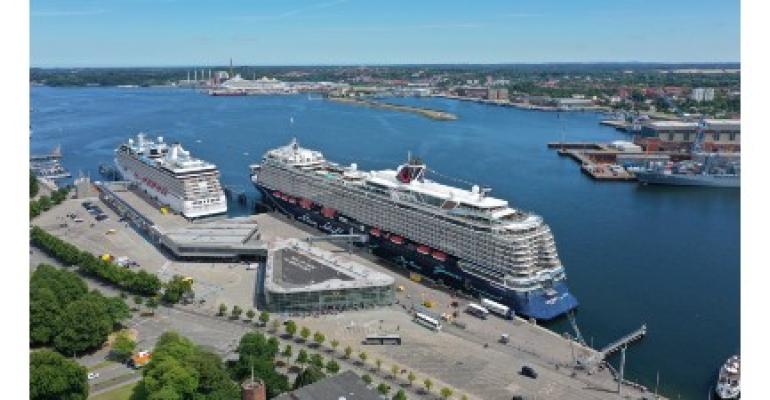 Two cruise ships docked at Ostseekai and another one at Ostuferhafen, in the background

Closing the 2022 cruise season today with a call by Vasco da Gama, the Port of Kiel announced this year broke all previous records, even exceeding the 2019 season.

Kiel recorded 834,431 passengers, a 4% increase, on 243 calls, a nearly 39% spike above 2019. While the turnaround segment — a core business for Kiel as one of Germany's leading cruise hubs — prospered, transit calls grew even more spectacularly.

According to the Port of Kiel, many transit passengers spent time in Kiel itself, but some took excursions further afield, including to Hamburg.

Port of Kiel MD Dirk Claus said 2022 saw more maiden calls than any previous year — 20 — with more than half of those by US operators including Norwegian Cruise Line and Regent Seven Seas Cruises.

Claus expects this number to triple in 2023, adding that numerous vessels have already scheduled integration tests in preparation for using shore power. He called on operators to continue adapting ships for cold ironing.

Seatrade Cruise News understands Kiel's tariff structure, granting reduced fees to ships ready to take shore power, is an incentive. Even the owners of a 1960s-era vessel are said to be interested.

Kiel currently supplies cruise ships docked at Ostseekai in the city centre with shore power; two additional plants are scheduled to become operational at Ostuferhafen late next year that will make cold ironing available also at Berth No. 1 located there.