Large cruise ships make a comeback in Venice through Marghera 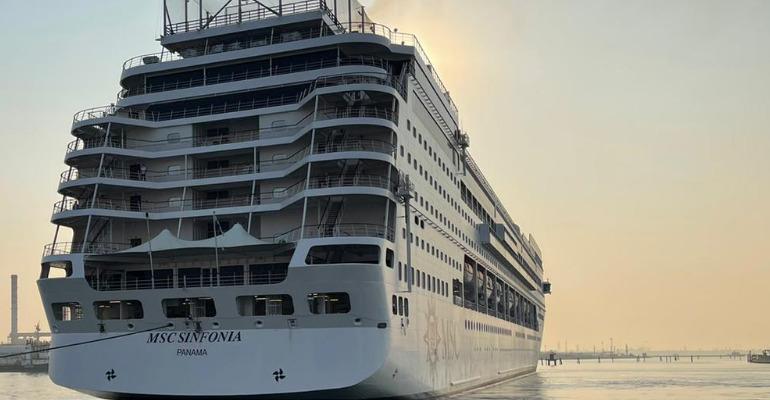 MSC Sinfonia docked April 9 at the first of two provisional landings at Marghera Commercial Port outside Venice, which is now equipped to accommodate large cruise ships.

Later that afternoon – ahead of MSC Sinfonia departing Marghera on a fresh sailing in the Adriatic Sea and Greece – new passengers completed check-in procedures at Stazione Marittima before being transferred to Marghera for embarkation.

The ban on reaching Stazione Marittima’s passenger terminal through the Giudecca Channel and the San Marco Channel and basin came into force August 1, 2021, for cruise ships larger than 25,000gt or over 180 meters long. In September last year, temporary landing sites in Venice-Marghera port were utilised.

The Liguria landing dock, together with other temporay landings, will serve 200 ships this year, down from 565 annual calls in Venice in 2019.

The provisional landing site at PSA Vecon container terminal permits cruise ships on all Saturdays and one Sunday of every month. Their passengers will be transferred from and to the VTP (or Venice Airport), amounting to 32 calls in 2022.

Adaptations there have included mooring enhancements and a 1,000-square-meter tent on the pier that serves as a temporary passenger terminal. In 105 working days of the enhancements being made, costs amounted to €1.8m.

The terminal was inaugurated in the presence of Italian Minister for Sustainable Infrastructures and Mobility Enrico Giovannini, Venice Region President Luca Zaia and Extraordinary Commissioner for Cruises at Venice Fulvio Lino Di Blasio.

Extraordinary commissioner for cruises at Venice

The Northern Adriatic Sea port authority president, he was chosen for the role with the initial task of establishing up to five provisional landing sites at Marghera commercial port, with two being made ready for the 2022 cruise season. His other tasks included improving navigation safety for cruise ships and safeguarding Venice Lagoon.

Temporary landings in the Marghera Commercial Port area are reached through the Malamocco inlet into the Venice Lagoon.

In 2021 and early 2022, cruise ships were diverted to Fusina ferry terminal on the southern border of Marghera Commercial Port where adaptations for a cruise landing site are ongoing, with Intermodal Terminal Venice also being adapted for the same purpose.

Together with the second temporary landing area at Intermodal Terminal Venice (Lombardy dock) in Marghera Commercial Port – where infrastructure works are estimated to conclude at the end of the month – and Fusina ferry terminal, two other landing sites with passenger terminals will be established at Marghera Commercial Port in 2023 and 2026 to support the redevelopment of cruise activities in Venice Lagoon.