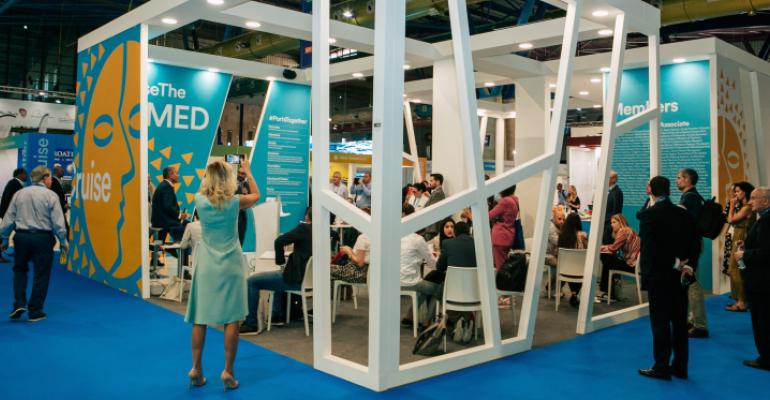 The 570 sq mtr plus MedCruise pavilion was centre stage at Seatrade Cruise Med in Malaga where MedCruise was the principal supporter.

A hive of activity throughout the two day event, the MedCruise pavilion hosted multiple presentataions by members and associate members includin the Adrijo project - a collaboration between Ancona, Ravenna, Venice, Trieste, Rijeka, Zadar, Split, and Dubrovnik ports. The project describes a sea – the Adriatic – that unites two cultural identities as well as two shores and includes a network established to preserve and promote their common cultural and maritime heritage, at the eight Italian and Croatian ports - by means of an interactive digital portal.

Through partcipating across several panels during the conference, MedCruise presented the two major pillars of its strategy for the next years -sustainability and data governance, which not only visualises data but implements a structure that will help the organisation in taking micro and macro decisions based on accurate and updated data.

During the Seatrade Cruise Awards ceromony, the first MedCruise Special Award was dedicated to the Black Sea Ports. Julia Strikh, external relations department from Odesa Seaport Authority, accepted the invitation of MedCruise to receive the award on behalf of the Black Sea region. In order to connect the disconnected, Seatrade Cruise provided a message of support on the trade show floor highlighting the MedCruise port members of Burgas, Bulgaria; Constantsa, Romania; Odesa, Ukraine; Trabzon, Turkey and Varna, Bulgaria.

Fulvio Lino Di Blasio, president of North Adriatic Sea Port Authority spoke about the value of being part of MedCruise: 'we are really convinced that to overcome this challenging moment for our sector in Venice, now more than ever, we need to share experiences and possible solutions, we need to learn the one from the others, we need to make comparisons with ports facing the same challenges. Joining forces and working together is the only way to design a new model of cruising the Med We are also confident that finding the right balance in a complex port system such as the one of the Venice Lagoon will be proof that it will be possible everywhere.'

Figen Ayan, President of MedCruise thanked the Malaga team saying:'I have always loved history and archaeology, so knowing that Malaga, this beautiful southern Spanish port town is one of the oldest cities in the world makes me shiver. While walking in its streets, you literally feel like travelling back in time. "It takes a long time to become young,” Pablo Picasso once said. He was talking about the kind of art he wanted to create, but he may as well have been speaking of his birthplace, Malaga.'

Ayan added, 'Seatrade Cruise Med 2022 was in a very inspiring port city, where we discussed key matters where we are redefining the word sustainability to make sure that the ships are welcomed by the local community and that our ports are ready technically.'