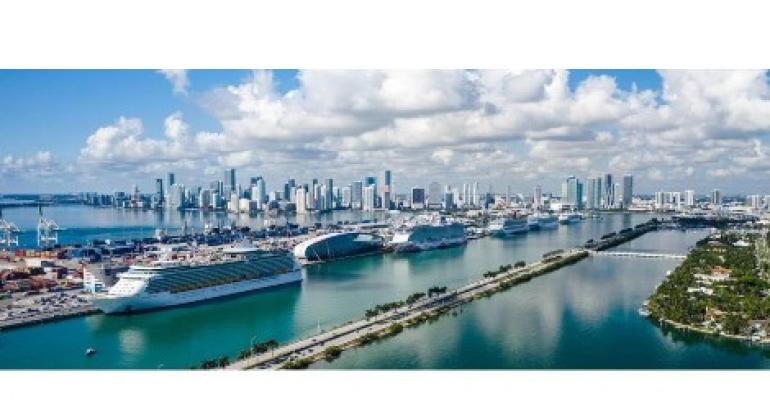 Miami-Dade County commissioners will vote Tuesday on a new Royal Caribbean Group terminal and berth and a headquarters development and lease deal worth $2.8b over 50 years.

This includes $2.5b from a PortMiami cruise terminal usage agreement plus $260m from an amended campus lease.

The agreement would generate a whopping 66,350,000 more contractually obligated passenger movements at the port.

It calls for building a new Terminal G for Royal Caribbean Group's exclusive use and Berth 10, where the company would share the new terminal under construction by MSC Cruises.

The agreement also covers the continued development of Royal Caribbean's PortMiami headquarters, put on hold during the pandemic, and a lease extension there through at least 2072

Royal Caribbean's existing Terminal G has capacity for ships with about 4,000 passengers. The new CTG will be able to handle Icon-class ships — cruising's largest — with capacity for 7,000-plus passengers. It will be built to the county's sustainable buildings ordinance with solar panels and have a multi-level shared parking garage with ground-level intermodal facility, connecting roadways and a provisioning building.

It will occupy both the existing site and PortMiami’s 1963-era administrative building, to be demolished.

The cruise terminal usage agreement is for a 36-year term including three seven-year extensions. Miami-Dade County would undertake the CTG and Berth 10 capital improvements projects, not to exceed $325m, with Royal Caribbean reimbursing at least $152.75m plus interest and costs.

If the agreement is approved, for the five-year period immediately following the effective date, Royal Caribbean warrants that its minimum annual guarantee at PortMiami will be the largest at any of its ports with sailings to the Caribbean basin.

Passing any other cruise line's passenger guarantee by  62%

Royal Caribbean had spent about $70m on improvements to its campus at the port before suspending construction in May 2020 to mitigate financial risks during the COVID-19 pandemic. In July 2021, the company notified the county of its intent to resume improvements and requested an extension of deadlines in its lease, which were approved in July this year.

The new agreement to be considered by commissioners on Tuesday would have the port complete Royal Caribbean's campus, capped at $450m in county-funded project costs, including improvements at the existing 1050 and 1080 buildings that collectively exceed $11.5m. Campus lease payments would increase by 125% of the county’s project costs including financing costs.

Miami-Dade would finance its campus construction costs through seaport revenue bonds or other financial mechanisms.

Miami-Dade estimates the deal would add approximately 12,000 new permanent direct, indirect and induced cruise-related jobs and an additional 1,000 employees at the Royal Caribbean campus with $100m in annual wages.

The projects also are expected to generate an estimated 9,634 construction jobs.