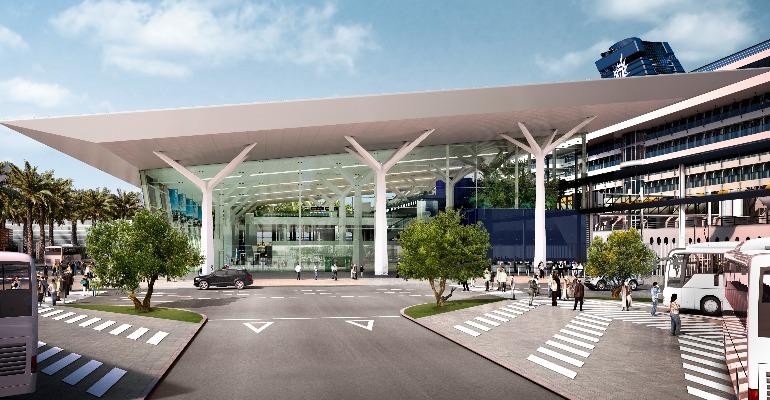 The dedicated cruise terminal is set to open in 2024

MSC Cruises has been awarded a 31 year lease from the Barcelona Port Authority for the construction of a new dedicated cruise terminal building scheduled to open in 2024 at Adossat Quay.

Designed by well-known Barcelona-based architect, Ricardo Bofill, the three-level terminal will span 11,670 sq mtr at a cost of €33m.

In a joint announcement on the project, Barcelona Port Chairman Mercé Conesa and MSC Cruises Executive Chairman Pierfrancesco Vago stressed the environmental focus of the new building, as well as its economic impact for the port and city of Barcelona; it will provide links to the port's electrical network, allowing vessels to operate on a pollution-free basis during port calls.

'Barcelona is not only an important homeport for the cruises division, but also for the entire Group and its shipping business,' said Vago. 'As such, the new terminal is a further proof of MSC Group’s longstanding commitment to the city of Barcelona and the entire Catalonia region. I am also honoured that for this project we will able to partner with the impressive Ricardo Bofill and his firm.'

He went on to add, 'Perhaps most importantly, the new terminal will allow us to operate expanded homeport operations, resulting in added direct and indirect economic benefit for the city and the overall region. This will come from higher spend locally by our international guests either flying into or out of Barcelona airport and likely to spend additional days in the city and its hotels together with their traveling parties.

'Homeport operations will also allow us to dedicate to Barcelona more of our new ships – including the LNG-powered MSC World Europa, which is currently under construction and is shaping up to become one of the most environmentally friendly ships at sea when she comes into service.'

Furthermore, Vago pointed out the environmental advantages of LNG fuel which will be provided at the new terminal, stating, 'Finally, the new terminal allows us to further demonstrate our commitment to environmental sustainability as it will feature both shore power facilities as well as LNG bunkering operations.'

Barcelona is one of MSC Cruises’ most important ports in the Western Med.

The sixth terminal at Adossat Quay

Conesa noted the location of the new building, which will be the sixth terminal at Adossat Quay. It follows an agreement in January 2018 made between the port and Barcelona's municipal government allowing the relocation of all cruise operations from the north and south terminals near the city centre.