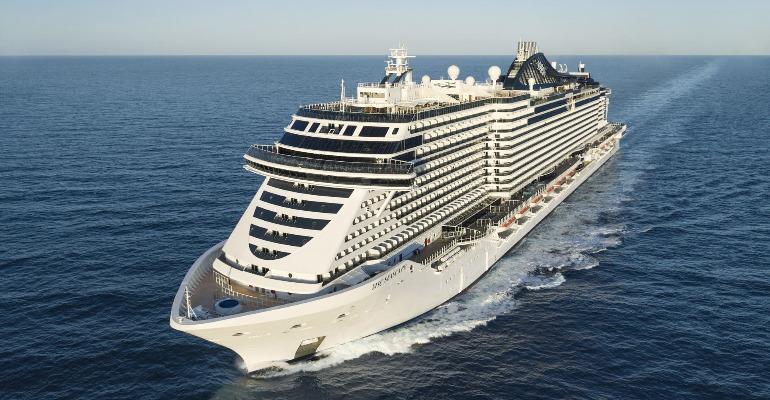 MSC Cruises’ fleet will visit almost 200 destinations in 85 countries during the 2022/23 season with both MSC World Europa and MSC Seascape set to make their debut.

The line’s first LNG-powered vessel, MSC World Europa, will be based in Doha for the FIFA World Cup Qatar 2022 football tournament in November and December. It will then operate cruises calling Dubai, Abu Dhabi and Sir Bani Yas Island in the United Arab Emirates and Doha, plus Dammam in Saudi Arabia. A mini-cruise on December 20 will follow, before the ship moves to deliver seven-night cruises in the Gulf region.

MSC Cruises announced earlier this week that it would be extending its season in the Arabian Gulf owing to strong demand.

MSC Opera will homeport in Dubai and sail to Abu Dhabi, Sir Bani Yas Island and both Muscat and Khasab in Oman, while MSC Splendida will homeport in Jeddah calling Yanbu and Al Wajh in Saudi Arabia, Aqaba in Jordan and Safaga in Egypt.

The second new ship to join MSC Cruises’ fleet, MSC Seascape, starts its inaugural season December 11, 2022 sailing from PortMiami, which also serves as the port of departure for MSC Meraviglia and MSC Divina.

MSC Seaside will embark on seven-night cruises from Fort de France in Martinique, Pointe-a-Pitre in Guadeloupe and Philipsburg in St Maarten with two different itineraries available. These include calls to destinations such as Castries in Saint Lucia, Bridgetown in Barbados, Saint George in Grenada, or St John’s in Antigua and Barbuda, Basseterre in St Kitts and Nevis and Roseau in Dominica.

Further details of the line's Mediterranean and Northern Europe sailings have also been revealed. MSC Grandiosa will operate seven-night cruises from Genoa, Civitavecchia and Palermo in Italy, Valletta in Malta, Barcelona in Spain and Marseille France, while MSC Virtuosa will sail from Genoa, La Spezia and Naples in Italy, Palma de Mallorca and Barcelona in Spain and Marseille.

MSC Lirica will operate 11-night voyages from Genoa to Civitavecchia and Messina in Italy, Rhodes in Greece, Limassol in Cyprus, Haifa in Israel and Heraklion in Crete (Greece), as well as 10-night sailings from Genoa to Marseille, Barcelona, Tangier and Casablanca in Morocco, plus the Spanish ports of Ceuta, Malaga and Alicante.

MSC Preziosa will commence seven-night voyages from Hamburg in Germany, Zeebrugge in Belgium, Rotterdam in the Netherlands, Le Havre in France and Southampton in the UK.

MSC Seashore will operate a seven-night itinerary from Santos calling Maceio, Salvador and Buzios in Brazil, and MSC Seaview will homeport for the first time in Rio de Janeiro in Brazil from December to March, offering three to eight-night cruises across difference itineraries, including the Brazilian destinations of Buzios, Ilhabela, Ilha Grande/Angra dos Reis, Ilheus and  Salvador, as well as to Uruguay and Argentina.

Additional information on MSC Cruises South America sailings include MSC Fantasia homeporting in Santos with a range of three to seven-night cruises with domestic calls including Ilha Grande, Buzios and Ilha Grande/Angra dos Reis, plus Montevideo and Punta Del Este in Uruguay and Buenos Aires in Argentina.

Sailings to Mossel Bay in South Africa, plus Walvis Bay and Luderitz in Namibia are to be conducted by MSC Sinfonia which homeports in Cape Town, with MSC Orchestra homeporting in Durban for voyages to Pomene and Portuguese Island in Mozambique, Walvis Bay and Cape Town.

MSC Magnifica and MSC Poesia will depart from Civitavecchia and Genoa on January 4 and 5, 2023 respectively, Marseille one day later and Barcelona on January 7. Once the two ships leave the Mediterranean Sea, they part ways in the Atlantic Ocean for their separate global itineraries.