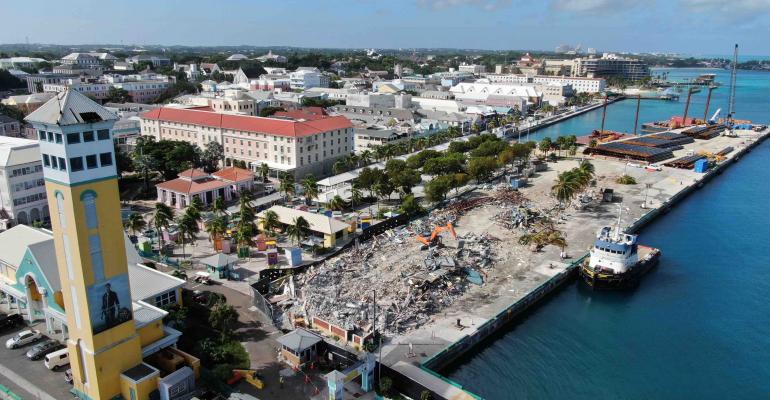 Demolition works should be completed at the end of 2020/early 2021
No other country stands to benefit more from the US cruise industry's recovery than the Bahamas, and Nassau will be ready.

So said Nassau Cruise Port Ltd. CEO Mike Maura Jr. during an update on the project that will add a berth for two Oasis-class ships, extend a pier to handle a third Oasis-size vessel and transform the waterfront into what is planned to be a world-class destination.

'These are going to be very exciting times,' Maura said, 'not just for Nassau Cruise Port but for all Bahamians, not just those in the tourism sector but residents and hotel guests who want to come down to this fabulous new waterfront and experience something they won't experience anywhere else.'

As ships resume sailing from the US on abbreviated itineraries, the Bahamas are the closest destination to the key homeports.

Maura expects one ship a day early in the new year and then 'We'll get back to five or six ships a day towards the end of 2021.'

He said all the big cruise companies — MSC, Royal Caribbean, Carnival, Norwegian and Disney — are expected. And, just last week, Virgin Voyages approached him about bringing Scarlet Lady to Nassau.

'There is so much demand ... Of all the destinations, Nassau is very well-positioned,' he said.

Meanwhile, 'this pandemic is helping us to move on the construction faster than we thought we could otherwise when the cruise ships were coming in,' noted Mehmet Kutman, chairman, Global Ports Holding. 'It's sad. It's bad. We all are getting affected morally, financially, health-wise. But at the same time, it's a blessing in disguise for the construction process.'

In Nassau, demolition works should be completed at the end of 2020/early 2021 so upland works can start in February. Ninety-percent of the Festival Place building is gone. After that, the Port Department building will be razed. Demolition of the Customs Warehouse was completed in June.

Soon ENKA Marine, the general contractor, will begin repairing the existing piers and setting the foundation for the new Oasis-class berth and pier extensions. The contractor has fully mobilized, according to Lionel Turnquest, director of projects & facilities, Nassau Cruise Port. Barges, tugs and cranes are on island, ready to go, and piles are being received.

In the marine piling process, the construction team will make repairs and install deep foundation piles into the seabed. This work will begin at the end of November and stretch about 10 to 12 months.

'The sound of the future'

Nov. 30, when the first pile is scheduled to be driven, will be 'a big day for us,' Turnquest said, while cautioning it's going to get noisy for residents. He called it 'the sound of the future.'

Upland works are to begin in February. One of the first areas will be the new Arrivals Terminal, which will house Customs, Immigration, the Port Department, medical facilities and the Nassau Cruise Port offices.

Festival Place and the ground transportation area will also be coming early on. Sheet pile will be driven to the west end of Berth 16 to create additional retail space for authentic Bahamian products and experiences — art, music, food.

A Junkanoo Museum and amphitheater are other future elements.

The developers expect Nassau's transformed waterfront to be a reason for people to buy cruises, and the expanded berthing comes during a record time for newbuilds.

'These ships are big ships. These ships need big berths. And that's what we're spending our money on,' Maura said.

He said Royal Caribbean has shared the specifications for its new Icon class, which Turnquest said will outsize Oasis. (The cruise operator hasn't publicly shared details but in announcing this LNG-powered series a couple years ago, it gave gross tonnage as approximately 200,000. The next Oasis-class ship, Wonder of the Seas, is approximately 227,000gt. Both are coming in 2022.)

Speaking to Bahamas media, Kutman said the country was wise to have chosen Global Ports Holding. GPH had an agreement with Cuba to modernize and manage Havana's cruise facilities before the Trump administration ended cruises from the US.

'We will be managing both ports [Nassau and Havana], hopefully, once the sanctions are lifted, and there is a strong belief in the new administration coming in that the sanctions might be lifted very early,' Kutman said in an apparent reference to the new Biden administration — though some experts doubt things will change.

'Between the Bahamas and Cuba, there is no other competition,' Kutman continued, 'especially as Key West no longer allows big ships. I think Nassau is very well-positioned to benefit.'