NCL rolls out 'Greatest Deal Ever,' opens bookings for cruises into 2024 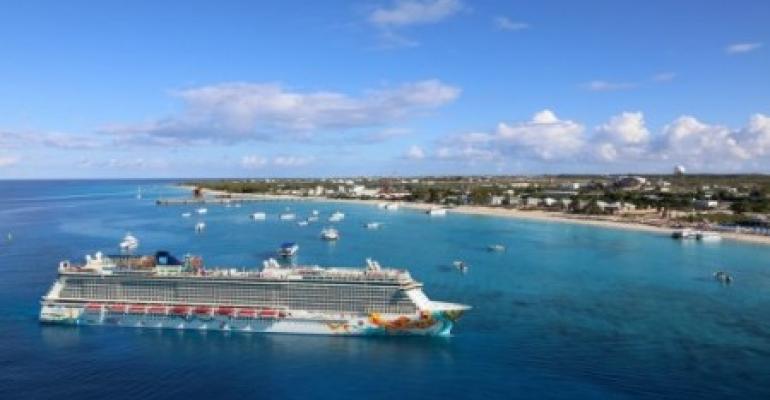 Norwegian Getaway is depicted in Grand Turk, a new port for NCL
Norwegian Cruise Line unfurled its 'Greatest Deal Ever' and opened sales for itineraries through summer 2024, the most inventory available in its history.

The sale, starting Nov. 16, offers a 70% discount off the second guest fare and seven free offers. These include free open bar, specialty dining, shore excursion credits, Wi-Fi, discounted rates for friends and family, free round-trip airfare for the second guest and a $250 CruiseFirst certificate to use toward a future sailing.

The 'Greatest Deal Ever' is available on all departures, all itineraries and all published voyage dates from 2021 through through summer 2024.

The newly released itineraries bring back voyages that are to make company history next year when Norwegian Epic debuts from Haifa in November 2022. The ship will once again offer 11- and  12-day Mediterranean open-jaw sailings between Haifa and Civitavecchia (Rome), Nov. 8, 2023, through Dec. 12, 2023.

Norwegian Epic will call at destinations like Livorno, Naples, Kusadasi, Istanbul, Piraeus, Patmos, Rhodes and Limassol. This itinerary will also feature 17 hours of port time at Ashdod, Israel, for the opportunity to explore both Tel Aviv and Jerusalem.

Norwegian Sky will sail a series of seven-day round-trip Southern Caribbean cruises from La Romana with a port call each day from Jan. 8 through April 22, 2024. This will make NCL the only major line sailing Southern Caribbean voyages with no sea days.

Alaska paired with Japan or Hawaii

In addition, NCL will offer a 12-day trans-Pacific voyage on Norwegian Jewel embarking April 10, 2024, from Tokyo to Seward, Alaska, with maiden calls at Sendai (Ishinomaki), Japan, and Dutch Harbor, Alaska.

On April 22 and Sept. 25, 2024, Norwegian Spirit will once again offer 'Fire and Ice' voyages between Honolulu and Vancouver, BC, visiting the tropical islands of Hawaii and Alaska towns. (The debut 'Fire and Ice' cruise is set for June 12, 2022, followed by a second departure Oct. 3, 2022.)

Norwegian Epic will debut in Trieste — in lieu of Venice — and Koper, Slovenia, during a 14-day 'Grand Mediterranean' holiday sailing Dec. 22, 2023, with Christmas markets at each port, no sea days and overnights at Dubrovnik on Christmas Eve, and Barcelona and Palma Mallorca to celebrate the new year.

Norwegian Escape will offer five, 10- to 11-day 'Grand Mediterranean' sailings between April 2024 and October 2024 to ports in Croatia, France, Greece, Italy, Malta and Spain. During the April 24 cruise the ship will stay until midnight at Ibiza.

Norwegian Pearl will sail a series of seven-day round-trips from May 26, 2024, through Oct. 27, 2024 from Trieste to Kotor, Montenegro, and Dubrovnik with a late departure from Santorini.

Norwegian Getaway will offer a nine-day round-trip from Copenhagen in May 2024 to ports in Belgium, Denmark, France, Germany, Netherlands, Norway and the UK. Long stays in port allow access to cities like Paris and Berlin.

In September 2024, Norwegian Joy will offer seven- and eight-day cruises between New York and Québec, with options for pre- and post-cruise stays at each city.

Norwegian Joy will sail from Miami to Panama City, an 11-day cruise embarking Nov. 25, 2023, with a full 13 hours at Willemstad, Curaçao. The ship will also offer two 15-day Panama Canal sailings in January 2024 between Miami and Los Angeles with an overnight at Panama City.

Grand Turk and other maiden calls

Several NCL ships will be sailing the Caribbean with three vessels making their first visits at Grand Turk. These include Norwegian Getaway on a 12-day holiday sailing in December 2023 round-trip New York and Norwegian Joy on a summer cruise from New York in August 2024.

Norwegian Joy will make its first visits to Philipsburg, St. Maarten, and Kralendijk, Bonaire, during a 12-day New York-Miami cruise in October 2023.

Norwegian Jade will call Puerto Plata, Dominican Republic, for the first time, plus Grand Turk and Grenada during a 14-day November 2023 voyage from Tampa.

Norwegian Joy will offer four-, five- and seven-day round-trips from New York to Bermuda from early April  to early October 2024, with the seven-day sailings providing up to 55 hours at the Royal Naval Dockyard.