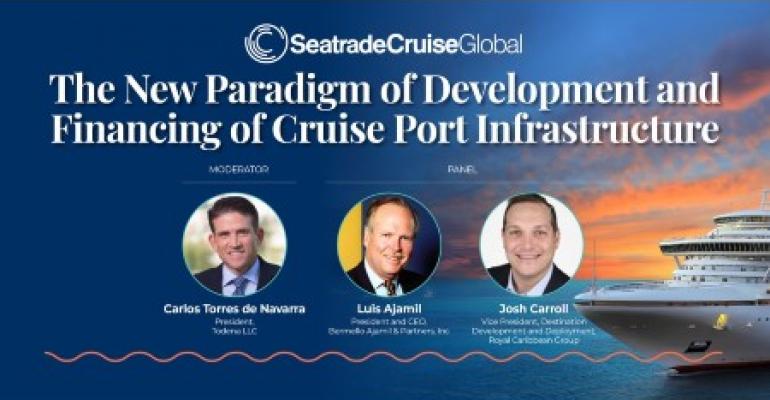 'This is a time for nontraditional players to come into the space,' said Carlos Torres de Navarra, president of Miami-based Todena LLC and a commercial port development veteran.

He cited the example of Macquarie's Ceres Terminals becoming a 50-50 partner in Royal Caribbean's Oasis-class terminal at the Port of Galveston.

'Something good is going to come out of [the pandemic],' said Luis Ajamil, president and CEO, Bermello Ajamil & Partners, recounting how creative development has been driven by crises, such as 9/11 leading to more drive-to homeports.

Ajamil thinks the pandemic's public health focus will persist, a positive, along with touchless technology that's transforming passenger processing. 'There will be a period of rethinking what happens in terminals,' he said. This may result in a smaller footprint and more efficient operations.

Pre-pandemic, Bermello Ajamil had many port projects in the pipeline. Some were slowed, some have a longer lead time.

In the US, at ports with traditional port authority-municipality funding, those serving cruise ships are hurting while cargo ports are flush. Projects at multipurpose ports are moving, but slowly. It boils down to confidence and access to capital.

'Asia is still very timid,' as Ajamil put it, noting projects there are huge and some delay might work in their favor, however 'Things slowed down a little bit more than they should.'

The high priority projects, though, are moving now, none that were under construction pre-pandemic stopped. 'Some sped up,' according to Josh Carroll, VP destination development and deployment, Royal Caribbean Group.

Nassau Cruise Port, for example, could speed ahead on construction without having to simultaneously handle cruise calls.

Currently inflation is a 'huge' issue for construction in certain markets, Ajamil said, with project prices going up 8% in some places.

Torres de Navarra listed pre-pandemic cruise infrastructure plans at the ports of Los Angeles, Seattle and Galveston, with New Orleans and Charleston looking at projects, and PortMiami in development, where the new Virgin Voyages and MSC Cruises terminals could potentially expand capacity to 12 ships.

How to decide which port developments take priority?

Carroll said it comes down to where the company wants to grow its customer base and where its brands are strong. 'And it's how do we ensure our best ships can go to the best places? We look at the orderbook and at the places where people want to go the most and prioritize those locations.'

According to Ajamil, selling an idea takes creativity and identifying what's unique that could make a marquee destination. 'I just hope people don't start putting ferris wheels in every port,' he quipped.

There's plenty of need for development.

'Look at the Western Caribbean. The number of ports is miniscule,' Ajamil said. 'That's going to grow. There a lot of low-hanging fruit for opportunities but it requires partnership. A greenfield project is risky if cruise lines aren't behind it.'

Cruise lines haven't tended to partner on infrastructure development in North America — an exception is Grand Bahama Shipyard — though it's very common in Europe, with Royal Caribbean, Carnival Corp. and MSC Cruises teaming at a number of Mediterranean ports.

Just because it's rare in the Caribbean doesn't mean it won't happen, Torres de Navarra said.

'The current situation is going to almost demand crowdsourcing for these projects,' he argued. 'If you're looking at it as an investor, having a number of cruise lines that are willing to make even a small commitment makes it a lot easier to fund these projects.'

Carroll predicted 'a bit more' partnership — another positive outcome from the pandemic when lines worked so closely together just to get cruising started again.

'It helped forge and solidify relationships,' he said. 'Often, it makes amazing commercial sense [to partner].'

Carroll pointed to Alaska, where Royal Caribbean, Norwegian Cruise Line Holdings and SSA have submitted a bid to develop a cruise terminal in Seward.

'For each of us to participate in the creation of this infrastructure makes perfect sense and it's a win-win,' he told the Seatrade audience.