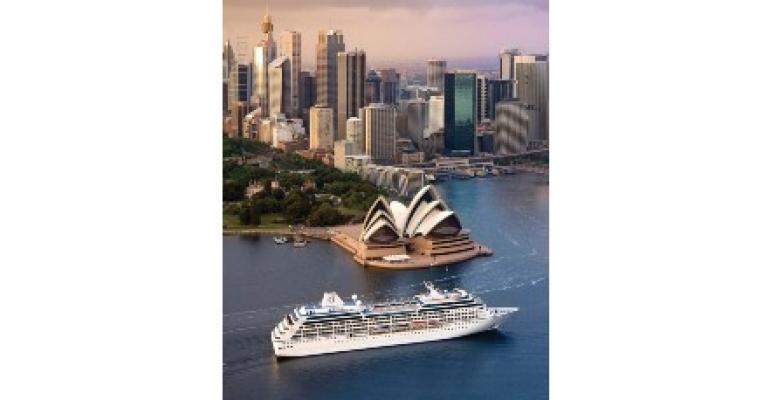 Insignia is shown in Sydney, one of the highlights on its 2024 world cruise

Oceania Cruises' 2024 'Around the World in 180 Days' itinerary features 96 destinations in 34 countries.

The 684-passenger Insignia will depart Los Angeles for New York on Jan. 14, crossing three oceans and 15 seas from the South Pacific to the coasts of Europe.

'Incredibly, last year our 2023 world cruise sold out in just one day, so for 2024 we are providing guests more extended voyage options to deeply and meaningfully rediscover the world,' Oceania President Howard Sherman said.

Insignia's world cruise, detailed here, sails westward across the Pacific to the Hawaiian Islands, French Polynesia and the Samoan Islands. The voyage continues south toward New Zealand's fjords and Australia.

In Asia, passengers will have the chance to immerse themselves in everything from the spiritual havens of Bali and Kyoto to bustling Tokyo, the dramatic landscape of Vietnam's Ha Long Bay and the golden pagodas of Yangon. More explorations await in India and the Arabian Peninsula, followed by destinations across the Mediterranean and the northern reaches of Europe before crossing the Atlantic to crown the journey on the Eastern Seaboard with arrival to New York.

The voyage provides access to more than 100 UNESCO World Heritage sites across 96 destinations, with 24 overnight stays and a series of curated complimentary special onshore events and optional multi-day overland programs.

The cruise is priced at $48,499 per person including first-class round-trip airfare and an array of included amenities with the Exclusive Prestige Package such as free laundry services, visa package, Internet, pre-paid gratuities and luggage delivery, plus OLife Choice amenities.

The four grand voyages include 'Grand Pacific Expedition,' from Los Angeles to Sydney, 77 days on Regatta. It departs Oct. 4, 2023, and visits 12 countries with 10 overnights in destinations such as Kyoto, Shanghai, Bali and Perth. Fares start at $15,199.

'Odyssey of Discoveries,' from Abu Dhabi to Tokyo, 82 days, sails on Riviera Dec. 29, 2023. It visits 18 countries across the Arabian Peninsula, India and Asia, with calls at less-trodden corners such as Sri Lanka and the Maldives. The cruise is priced from $21,199.