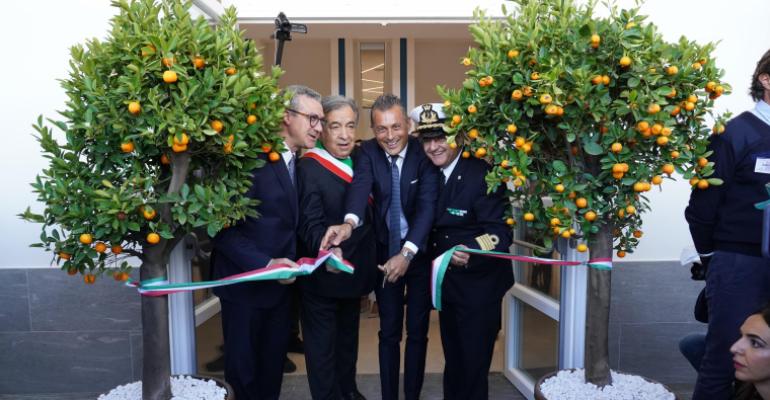 The facility is managed by the new West Sicily Gate company, a venture between MSC Cruises and Costa Cruises, and responsible for managing cruise terminals at four ports (Palermo, Trapani, Porto Empedocle and Termini Imerese) within the Port System Authority of the Western Sicilian Sea.

A video message was also sent by Italy's Minister of Sustainable Infrastructures and Mobility, Enrico Giovannini and the Minister for Southern Italy and Territorial Cohesion, Mara Carfagna.

Developed from the skeleton of the former 1950-built Stazione Marittima and completely renovated internally to provide a modern structure and services to welcome cruise guests, the terminal and Vittorio Veneto quay revitalization are key elements, along with West Sicily Gate, to welcome  1.5m cruise passengers  in the four ports of MedCruise member Port System Authority of the Western Sicilian Sea.

‘We have entrusted our miracle to West Sicily Gate, namely this home for cruise passengers, where we are today: the company will manage our terminals for 30 years, guaranteeing us one and a half million passengers. I wish them a good luck for the work that awaits them, the first fruits of which are already there for all to see,’ said Monti.

‘2022 traffic forecasts reveal growing figures for our port, especially now that the ships start to cruise more and more fully loaded,’ he added.

In 2019, the last pre-Covid year, the port welcomed 501,000 cruise passengers and about 200 calls. In 2022, 302 calls and half a million passengers were expected, calculated on a reduced passenger capacity, in compliance with covid protocols but this number can now be reformulated and is destined to grow, Monti claimed.

He thanked the two cruise lines and West Sicily Gate’s Isgrò and general director Antonio di Monte for their support.

‘When I took the helm of the Port System Authority of the Western Sicilian Sea in 2017, the Stazione Marittima and the Vittorio Veneto were completely neglected as well as the efficiency and sustainability of nearby infrastructures. Today we have a modern cruise terminal and a Vittorio Veneto quay capable of accommodating two large cruise ships thanks also to dredging and the freeing of water spaces to allow safe maneuvers.

The nearby Sammuzzo quay has also been refurbished to accommodate a terminal for hydrofoil traffic providing a public service to the islands as well as for cruise ships,’ underlined the Port Authority president.

These activities are part of a wider Western Sicily ports development plan, totaling at least €1bn, for infrastructure, services and waterfront investment.

‘We have already inaugurated four terminals between Trapani and Palermo, respectively devoted to ferries, hydrofoils and cruise ships in both ports. In October we will launch work on the cruise terminal at Porto Empedocle between the Turkish Steps (Scala dei Turchi) and the Valley of Temples (Valle dei Tempi), which has already accommodated cruise ships.’

Monti also mentioned developments at the nearby Fincantieri shipyard in Palermo with its new 150,000-ton deadweight dry dock and 300mtr quay for the construction of new ships, including new generation cruise ships.