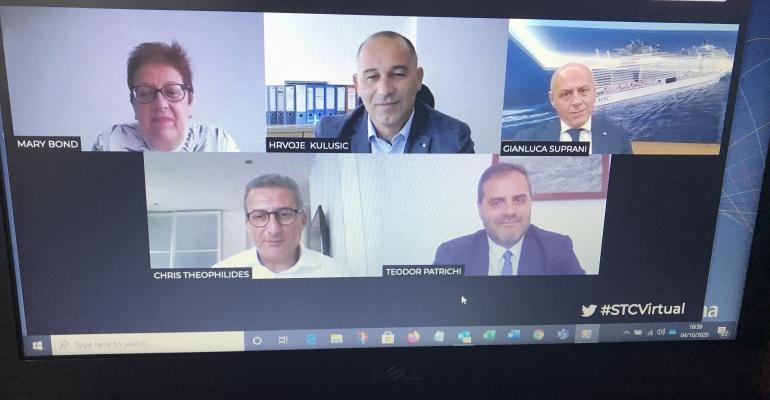 Restarting big ship cruising in the Mediterranean has been a complex exercise, both on a national and local level, said Gianluca Suprani, head of global port development & shore activities, MSC Cruises, at Seatrade Cruise Virtual.

MSC reintroduced cruises calling at Italian ports and Malta last month and will commence with MSC Magnifica from Greece on October 19.

Suprani shared how important it has been to engage with the local community in each destination, ranging from the port, the police, the immigration and customs, the tourist board and mayor, ‘explaining and demonstrating that we are not going to be a burden on the communities and by strictly following our own health and safety protocols that the ship is self-sufficient when visiting.'

He said support at a local level has been ‘extraordinary’.

Joining the 'Making the Entire Med Accessible' session, sponsored by Turkey Tourism Promotion and Development Agency (TGA), Chris Theophilides, CEO, Celestyal Cruises, which is planning a return to East Med cruising in March, concurred with Suprani saying the phased re-entry approach will install confidence in both passengers and communities.

2020 was destined to be the year of return for Black Sea cruising but the pandemic has put paid to that for the time noted Teodor Patrichi, port operations manager, Maritime Ports Administration Constanta, who also heads the MedCruise Black Sea Working Group.

‘We are very optimistic about the future with 20 or so calls already booked for 2021 and same number in 2022 and bookings into 2023,’ Patrichi said.

Sharing a view from the Adriatic, Hrvoje Kulusic, assistant general manager for operations, development and maintenance, Dubrovnik Port Authorit,y remarked it’s been a case in Croatia of getting the health authorities to understand how a return to cruising will be structured. He added that currently only cruise ships with up to 200 passengers can call, with bigger ships being looked at on a case-by-case basis.

Asked if he felt MSC Cruises is able to expand its current programme (beyond Italy, Greece and Malta), Suprani said it remains a fluid situation that is constantly being assessed but the second wave of the virus in two key Mediterranean markets, Spain and France, is not helping.

Looking further ahead, when cruising in the Med can return to pre-COVID levels, will there be a reopening of North Africa? asked moderator Seatrade Cruise’s Mary Bond.

‘We had been calling in Morocco in Algiers and Casablanca so we never left North Africa but we have added Tunisia back into our itineraries with calls in La Goulette in 2021,’ remarked Suprani.

The discussion then turned to whether in the next year or so will there be more demand for cruises closer to home and would shorter duration sailings appeal more?

‘I think we will see people taking it slowly and enjoying a more immersive experience in destinations after being cooped up for so long, said Theophilides adding, ‘we are re-starting with three itineraries of seven days duration next year.’

He believes there may be a reduction in port capacity initially due to the requirements needed to implement embark/disembark protocols and staged excursions  will require more space and time so ports may not be able to operate to 2019 levels as this will be different operating environment the Celestyal CEO said.

The Mediterranean is the second most popular destination for cruising after the Caribbean but can it maintain that position? asked Bond.

The Med, ‘has a bright future’ noted Suprani while Theophilides referred to it as, ‘a cruising paradise with excellent destinations, diversity and culture and we will continue to give the Caribbean a run for its money.’