Plans for Venice cruise homeporting at nearby Marghera advance 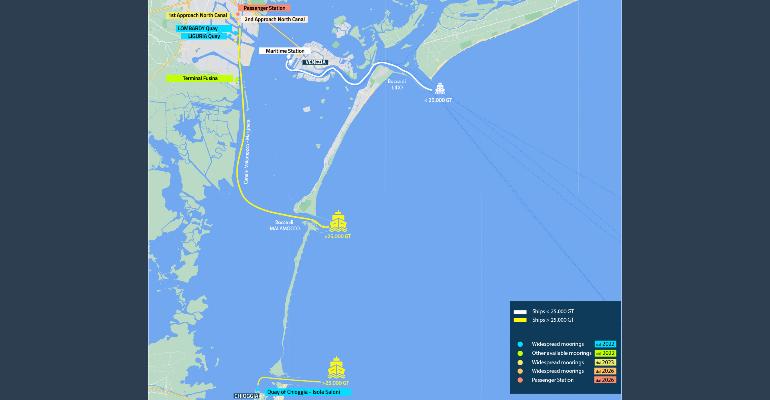 Owing to the new landings, 385 calls and 1m passengers are anticipated for 2027, with 90% homeporting

In the 16 months since larger cruise ships were banned from the Giudecca Channel and San Marco basin, officials have been working to find alternative ways to bring passengers into Venice Lagoon while safeguarding its fragile environment.

‘We have reached an agreement with the Terminal Fusina operator – soon to be signed – and the authorities to provide the site with means for homeport operations,’ added Fabrizio Spagna, president and CEO of Venezia Terminal Passeggeri (VTP).

This would accommodate cruise ships in excess of 25,000gt and longer than 180mtr, which have been banned from the Giudecca Canal since August 2021. Since then, Italy has allocated €158m to come up with alternatives to accommodate these larger cruise ships.

‘With the possibility to conduct homeport operations from Fusina Terminal, we are improving the passenger experience and reducing operating costs,’ said Spagna. Venezia Terminal Passeggeri is set to fund the operations.

The first temporary landing site at the new Channel North quay (North Side) will become available in 2024, and design work for a passenger terminal initiated at the same time.

Construction activities on the terminal and a second landing area on the same quay will also be launched in 2024, to host additional homeporting for larger ships.

While the longer of the two quays at Fusina will be able to accommodate ships up to 250mtr long, the Channel North quay will be able to host two smaller ships whose dimensions are yet to be disclosed.

Last week, the commissioner gave an update on his work to create the infrastructure and organisation to sustainably host 1m cruise passengers in Venice and Chioggia by 2027, almost 100% through homeporting.

The commissioner, together with the Italian Coast Guard, VTP, port operators and authorities, has been working to enable disembarkation and embarkation from three temporary landings at the Marghera Commercial Port reached via the Malamocco entry point. These include the Liguria and Lombardy quays at the Tiv and Vecon commercial terminal for accommodating cruise ships on the weekends, and the Fusina ro-ro terminal managed by Venice Ro-Port MoS hosting up to two cruise ships.

This is alongside Chioggia port. Operations from the temporary landings, with the exception of Chioggia, are being conducted through Stazione Marittima with passengers embarking and disembarking from the VTP terminal.

Works planned for the Malamocco and Vittorio Emanuele channels

A feasibility study under the Channeling Project, co-funded by the European Union, was conducted on the additional cruise traffic transiting Malamocco to reach Marghera and the interaction with freighters, with additional studies to follow on cruise ships’ safety and impact on the Vittorio Emanuele III channel.

Studies by the Danish Hydraulic Institute (DHI), starting with the Malamocco-Marghera canal, will make it possible to identify actions to be taken to improve the navigability of the main port arteries to minimise the impact on the environment and imrpove safe navigation along the canals.

With the support of an independent study by the Ca’ Foscari University of Venice, maintenance and dredging works are planned starting with Malamocco-Marghera, followed by the Vittorio Emanuele III channel. The latter, established in the 1920s and made up to 11 meters deep to connect Marghera and Stazione Marittima until the Malamocco-Marghera channel was excavated, is no longer operational.

Feasibility and environmental studies are on-going to dredge it back down to seven- to eight-meter depths while maintaining the necessary width to allow small to mid-sized cruise ships to reach Stazione Marittima from the Malamocco entry point.

Di Blasio stated, ‘With all these available landings – including Chioggia and Marghera, the full operational Canal North landing facilities and the availability of the Vittorio Emanuele III channel – we forecast 385 calls and 1m passengers in 2027, with 90% homeporting.’

Concluded Spagna, ‘We have the opportunity to outline a cruise model based on sustainability and perfect integration with the territory, once again an example for the whole world. A new formula that is compatible with the city and the territory.’