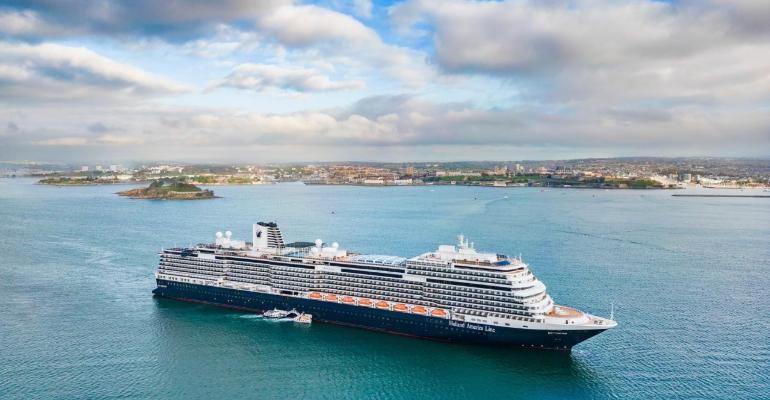 October saw the arrival of Holland America Line’s Rotterdam, which made a 150th anniversary visit to celebrate the founding of the cruise line in 1872

Next year sees an increase in the number of cruise ships scheduled to visit Plymouth, whose busy 2022 season saw the port receive thousands of cruisers.

Twelve ships are currently lined up to visit in 2023, among them, Saga Cruises’ Spirit of Discovery, Silversea Cruises’ Silver Dawn and Fred. Olsen Cruise Lines’ Braemar, with further enquiries being received by the port, situated on the south coast of Devon.

Plymouth has three berthing and anchorage options for cruise ships including berths alongside Trinity Pier and West Wharf at Mill Bay, plus a number of anchorages in Plymouth Sound.

An economic boost for the city

Destination Plymouth’s chief executive Amanda Lumley explained, ‘The cruise tourism generated by the ships visiting Plymouth brings a welcome economic boost through passengers and crew spending on everything from visiting the attractions and taking tours, to the gift shops and other retail outlets, cafes, restaurants and boat trips. There are also the port revenues for berthing, pilotage, harbour fees, staff.’

She added, ‘It’s fantastic news that so many passenger liners are already booked in for next year and we would encourage local businesses to get involved with the cruise guests and crew coming ashore, putting up welcome signs and decorations to make each ship’s call a really special event for visitors.’

The port went on to express gratitude towards those involved in the process of enabling cruise calls, including the cruise partners who fund the business development programme, Cattewater Harbour Commissioners, Associated British Ports Millbay, Plymouth Waterfront Partnership BID and City Centre Company BID, and Plymouth City Council for

The port welcomed thousands of cruise tourists this year with the post-pandemic return of cruise ships.

Among the vessels to arrive were Ocean Nova which called twice in April and Seabourn’s Seabourn Ovation which called in June. Nicko Cruises’ Vasco da Gama arrived in August, carrying 500 German passengers who disembarked to spend a day in and around the city.

Ponant made an unscheduled call

In early September, Ponant’s Le Champlain – under charter to Abercrombie & Kent – made an unscheduled call at Mill Bay Docks. Booked on a Friday for a Monday visit, Plymouth was able to accomodate the last minute call.

During the day, a Sir Francis Drake actor in authentic costume attended to entertain passengers - the English explorer and sea captain was born in Devon.

October saw the arrival of Holland America Line’s Rotterdam, which made a 150th anniversary visit to celebrate the founding of the company in 1872 when line’s first ship, Rotterdam I, visited Plymouth to collect mail and passengers en route to New York.

Travel trade, media and a port and city delegation embarked the vessel, including the Lord Mayor Councillor Sue Dann, the King's Harbour Master and members of the Plymouth Cruise Partnership to mark the occasion. The traditional exchange of plaques took place involving the master of Rotterdam and Dann.

There was a town cryer and a pop-up welcome centre at the Barbican/Commercial Wharf for the occasion, and cruise ambassador volunteers led by Douglas and Annemarie Kerr welcomed the ship’s passengers and crew as they went ashore, providing information during the day and a farewell as they returned to the ship for departure.

Rotterdam is scheduled to return to Plymouth in 2023.