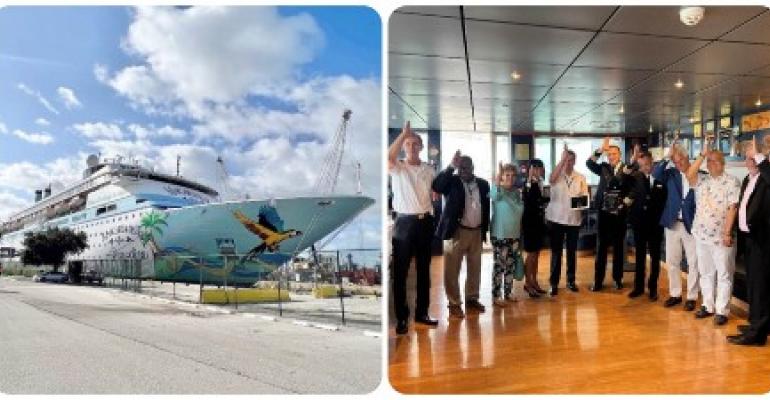 Florida's Port of Palm Beach welcomed Margaritaville at Sea Paradise at a plaque exchange ceremony aboard the newly christened ship on Friday.

Almira predicted a 'positive economic impact to the City of Riviera Beach, Palm Beach County and the state of Florida' from this 'one-of-a-kind cruise experience.

The ship is the former Grand Classica, which sailed for Bahamas Paradise Cruise Line. It has rebranded to Margaritaville at Sea and the vessel underwent a transformation to offer 11 rebranded food and beverage venues, a Broadway-style show written and produced by Jimmy Buffett and Frank Marshall and a St. Somewhere Spa.

Margaritaville at Sea Paradise has 658 staterooms that can accommodate almost 1,700 passengers.

The Port of Palm Beach is a 15-minute drive from the Palm Beach International Airport and a five-minute walk from the Riviera Beach Marina Village with its restaurants and watersports offerings including paddle boarding, kayaking, parasailing and jet skiing.