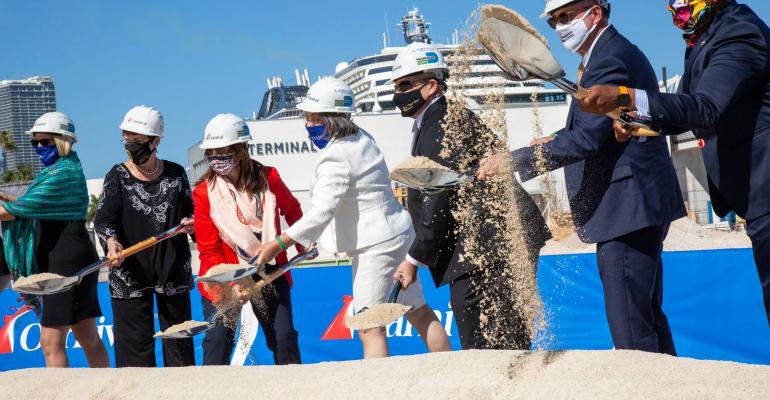 Pitching in at the groundbreaking were officials including Carnival President Christine Duffy, in red, and Miami-Dade County Mayor Daniella Levine Cava, in white

Ground was broken Friday for Carnival Cruise Line's third terminal at PortMiami. The $170m Terminal F is the future home of Carnival Celebration.

'Carnival is known for fun and with Terminal F, you can say that capital F will be for fun,' Carnival President Christine Duffy said.

'We will be back, better and stronger'

Duffy called the groundbreaking a symbol of 'commitment, optimism and confidence that we will be back and back better and stronger than ever.'

Punctuating that pledge, Carnival Dream sailed past with a blast and a 'We will be back' sign.

The 471,000-square-foot Terminal F is actually a remodeling and expansion project that also involves terminals D and E, making Carnival the only line to have three terminals there and cementing Miami as its largest homeport.

Terminal F is due for completion in September 2022, and Carnival Celebration, the port's first LNG-powered ship, is expected to begin passenger service in November that year.

Carnival's 50th anniversary is also in 2022, and Duffy noted the line's half-century association with PortMiami, 'the cruise capital of the world, and that won't change with the level of commitment, development and support provided.'

She called Carnival Celebration and the terminal a 'transition to our next 50 years.'

Thanking port and county officials, Duffy mentioned how the waiving of berthing fees has 'helped tremendously for all lines using the port as a staging base for their ships.'

'Appetite for cruising is huge'

'The appetite for cruising is huge,' Miami-Dade County Mayor Daniella Levine Cava said, adding: 'This is a great time to build and get ready for a robust recovery,'

The ceremony was hosted by PortMiami Port Director and CEO Juan Kuryla and also featured remarks by county commissioners, a representative of the International Longshoremen's Association and general contractor Lemartec Corp., a MasTec company.

Representatives of MSC Cruises, Norwegian Cruise Line and Virgin Voyages were present, too, as well as officials from the US Coast Guard and US Customs and Border Protection and various local tourism entities.

The ceremony followed by just a couple weeks the groundbreaking for Virgin's Terminal V at the port.