HomeNewsPorts & DestinationsPuerto Plata's Taino Bay to welcome cruise ships in December and Virgin can't wait
Recent
Recent News
Onboard Media touts locally made products on Carnival ships in Alaska
May 24, 2022
NCL moves to nine ships in Europe this year with Sun redeployed from Asia
May 24, 2022
AmaWaterways unveils savings for Mekong return in October
May 24, 2022
NCL’s Ben Angell new chairman of CLIA Australasia
May 24, 2022 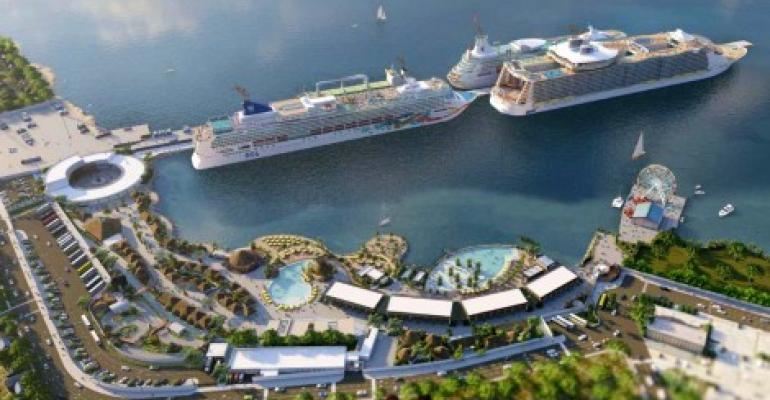 Puerto Plata's new cruise pier at Taino Bay is poised to begin welcoming ships in December from a range of lines, including Virgin Voyages.

Once a popular Caribbean cruise stop, Puerto Plata in the Dominican Republic lay fallow for years until Carnival Corp. & plc opened nearby Amber Cove in late 2015.

'We think Puerto Plata is very well situated geographically and offers a variety of experiences for our sailors (passengers). Once completed, Puerto Plata will be one of the better destinations in the Caribbean,' predicted Virgin Voyages' Juan Trescastro, senior director - itineraries, destinations & government relations.

At the new Taino Bay, the former cargo pier was extended to handle two Oasis-size ships and one smaller vessel. It's complete, awaiting only fenders and bollards, according to Robert Shamosh of ITM Group, whose Puerto Plata Port Investments is behind the $80m project (pre-pandemic, this had been a Holistica Destination).

However, Dominican seafarer unions lobbied the government to require the new cargo pier, a separate facility being built in the same bay, be functional before Taino Bay begins taking cruise ships. Shamosh said Dec. 15 is the estimated ready date, 'if not sooner.'

Scarlet Lady's first call had been set for Oct. 17 and a delay to Dec. 15 will impact five sailings. Meanwhile, Virgin Voyages has applied to Carnival Corp. to use Amber Cove as a substitute, with free shuttles to operate between there and Puerto Plata.

Taino Bay's first phase of upland development, expected to be open for this winter's calls, includes a welcome area, transport hub, retail, beach club, food and beverage outlets, entertainment and continuous free trolley service to Puerto Plata's colonial center, which is undergoing heavy investment. A second phase, due about 12 months after, will complete an experience village themed on the pre-Columbian Taino culture.

There are ample shore excursions already, and Shamosh said his company has a concession to create a mountain adventure park.

'We're not concerned about the upland development because most of our sailors want to experience the city and the real culture. We're not into "Perfect Day"-type experiences,' Trescastro said, referring to Royal Caribbean's Perfect Day at CocoCay private island with its waterslides and attractions.

At Puerto Plata Virgin will offer a whopping 45 excursions focused on culture and adventure, 'and we encourage our sailors to go out on their own,' Trescastro added. 'We attract savvy travelers. They don't need us to tell them where to go.' Twenty-two of the 45 excursions qualify as 'bubble' tours; they're outdoors, without a lot of community interaction.

Most of these are 'energetically' active, as Trescastro described them. For example, the line doesn't just offer kitesurfing, something the area is known for — it provides three different kitesurfing levels, for beginners all the way up to pro. A tour to the 27 Damajagua Waterfalls takes participants deep into the mountains and involves hiking and climbing.

Other Virgin options focus on culture, such as culinary experiences, art and a family farm visit. The line engaged smaller tour operators who created programs for as few as six, eight or 10 participants.

Choices range from interacting with artists in their studios to spending a day in the countryside with farmer/artisan Doña Catalina, who shows how to plant, grow and produce the materials that go into traditional Dominican brooms. Then everyone pitches in to prepare a family-style lunch using local produce in an experience that's also laced with dancing and singing.

There are some volume excursions, too, but 'a lot of our tours are keep to no more than 12 or 15 sailors and these small ones are really special,' Trescastro said. Private tours can be arranged as well. All Virgin excursions include extras like 'bevvies and bites.'

Taino Bay's hop-on, hop-off trolley tours to the historic colonial center of Puerto Plata are listed in Virgin's sailors' guide, along with recommendations of places to visit — 'and we don't charge storekeepers, restaurants or bars' to be listed, Trescastro said.

'We anticipate once word gets around, people will want to be on a Virgin tour. We're not making a 100% markup.' Pricing, he said, is comparable to the independent (non-cruise-line) tours found online. Tours open to book 135 days before departure for sailors in RockStar Suites and 120 days before for everyone else. Because they haven't opened yet, Trescastro couldn't say what's popular.

Virgin aims for a 30% to 35% tour uptake — about double the industry average, he said.

'The port is going to be pretty busy because it has a lot to offer and the tour operators are mature because of Carnival's Amber Cove,' Trescastro forecast. 'For us, it's a critical port.' Scarlet Lady operates four- and five-night cruises from PortMiami and, apart from the Turks and Caicos, Puerto Plata is the furthest point east that can be reached in five days.

'It's a great Caribbean destination for our demographic in that they're very active and into nature and culture,' Trescastro said. 'It's going to be very popular.'