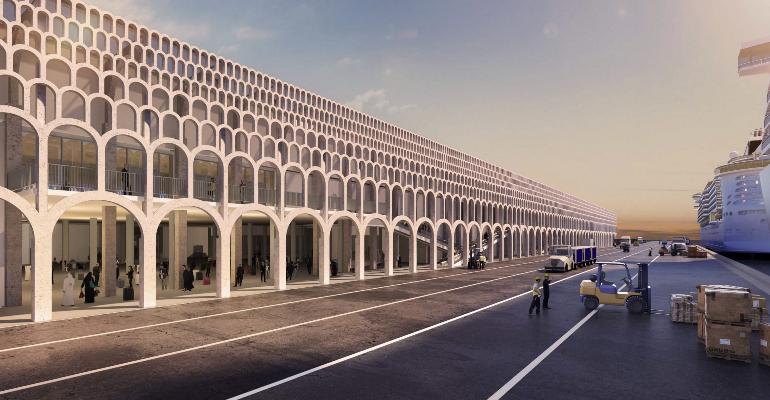 With all eyes on Doha ahead of the FIFA World Cup, the highly awaited opening of the Grand Cruise Terminal and the naming ceremony of MSC World Europa, Seatrade Cruise visited Qatar for a view on the highlights in store for cruise passengers.

Staggering architecture, ubiquitous art installations and pristine streets envelop cruise passengers as they enter Doha to begin their discovery of a city that pays homage to its rich cultural heritage while showcasing the very best in modern luxury.

Described by MSC Cruises’ executive chairman Pierfrancesco Vago as ‘one of the seven new Urban Wonders of the World,’ the cruise line has selected Doha to host the naming ceremony for its first LNG-powered ship – and the largest cruise ship in the world – MSC World Europa on November 13. It will take place at the city’s Grand Cruise Terminal near the Museum of Islamic Art and Souq Waqif, and will house both an art gallery and aquarium, while offering sweeping views over the Corniche. 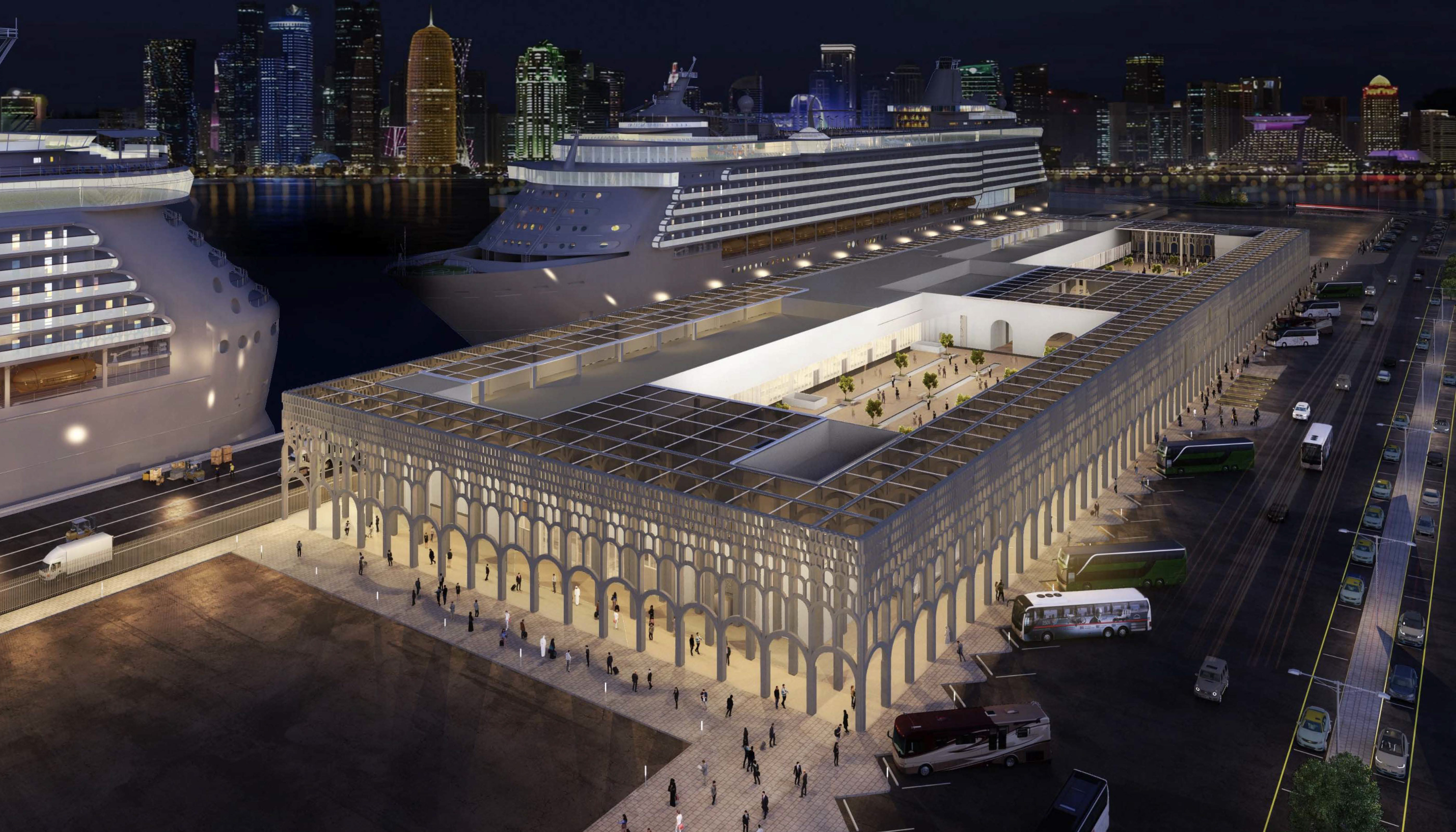 A week later, the city becomes the stomping ground of fresh festivities as football fans from around the world gather for the 2022 FIFA World Cup in Doha from November 20 to December 18.

Half of the world’s population live within a five-hour flight radius of Qatar, which is set to welcome between 220,000 and 250,000 passengers over the course of the 2022-2023 cruise season, and one-million visitors during the World Cup.

The destination aims to increase the number of luxury cruise lines. 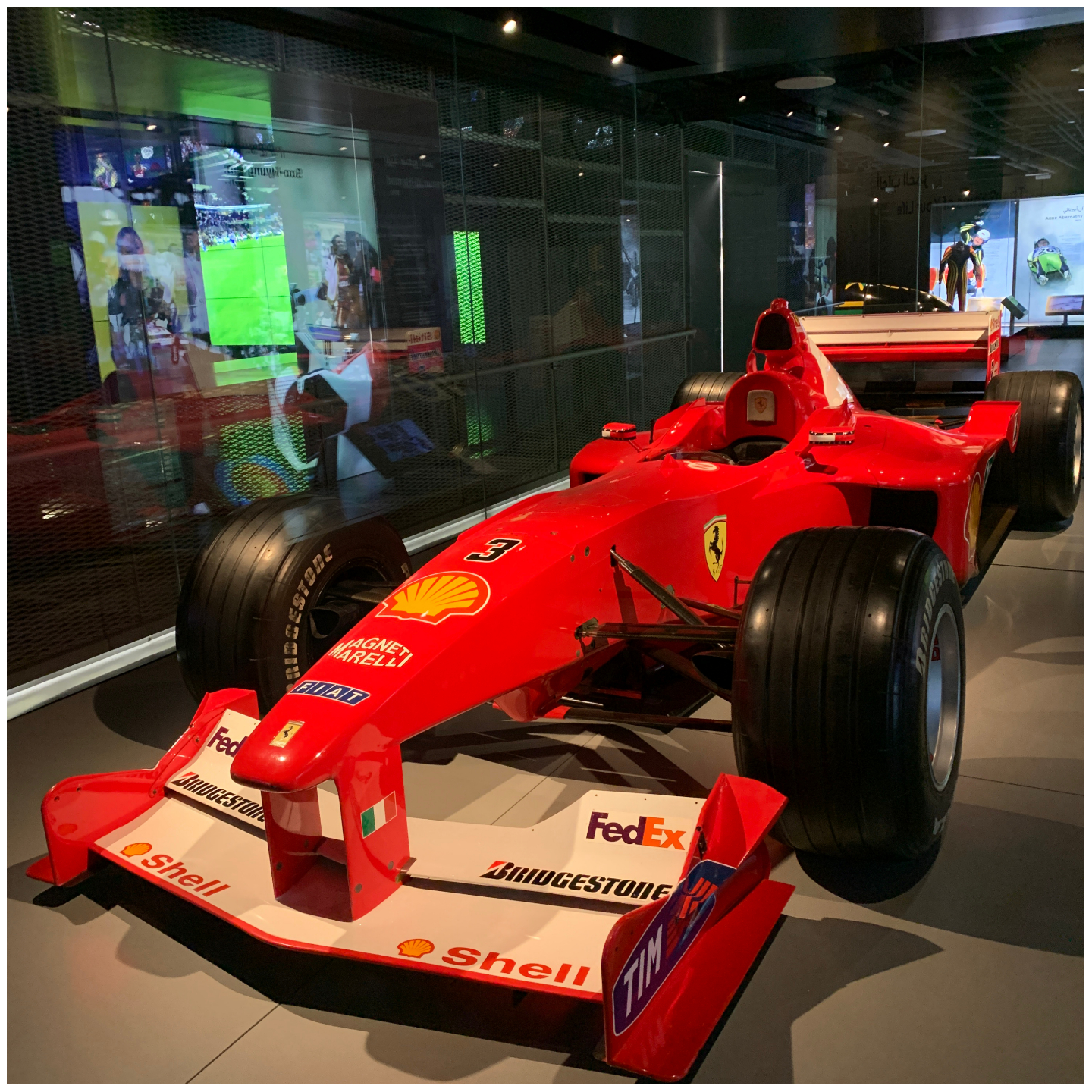 Part of the Sport City complex, the interactive 3-2-1 Qatar Olympic and Sports Museum opened in March. It takes passengers on a journey of sport through the ages and is a 30-minute bus ride from the Grand Cruise Terminal. Its seven galleries contain a combination of medals, mascots, torches and cauldrons from games far and wide, including the torch from the 1936 Olympic games in Germany used as propaganda to bolster the Nazi regime. It has a cinema airing footage on sport through history, original belongings of sports personalities – including gloves worn by boxer Mohammed Ali during his first heavyweight title fight, plus clothing from footballers David Beckham and Lionel Messi, champion rower Steve Redgrave, tennis player Roger Federer and the F1 Ferrari driven by former racing driver Michael Schumacher. Before exiting, an activity area draws in visitors offering solo and group games for all ages: from virtual wave jumping to rowing to going head to head with a robotic goal keeper, as part of its drive to encourage active living. A new gallery is under development inside the museum complex, with details yet to be disclosed. Naua restaurant on the top floor, serving up guilt-free food from a menu based on healthy ingredients created by two Michelin Star chef Tom Aikens opened just two months ago. 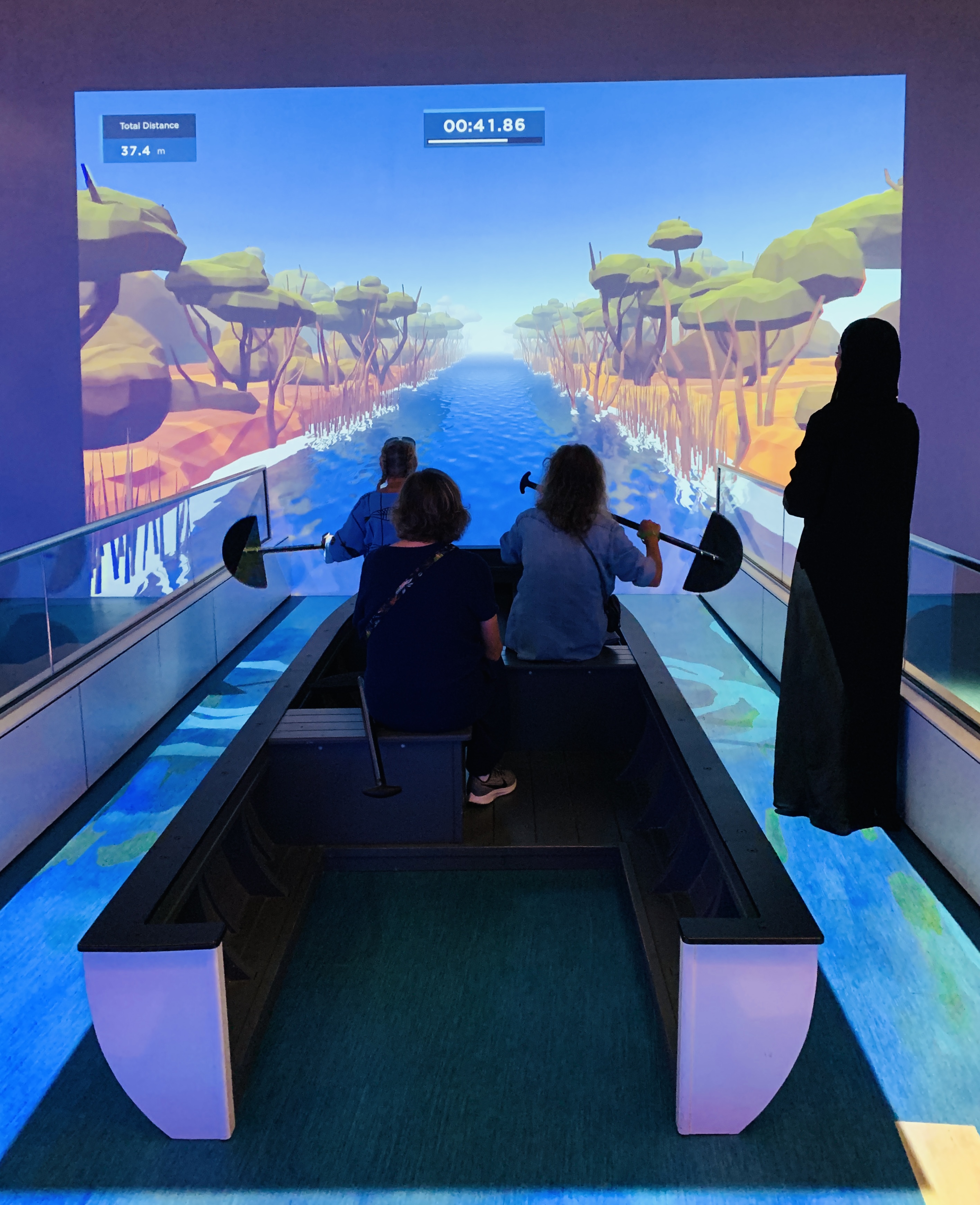 At least 11 museums and galleries can be found in Doha in total and none more distinguishable than the National Museum in the shape of a desert rose, the brainchild of French architect Jean Nouvel. Composed of 539 double-curved and interlocking fiber-reinforced concrete panels and not a single column, the floors curve and bend in discreet waves as they lead from exhibit to exhibit, and the heat of the sun fails to penetrate as part of its sustainable form. 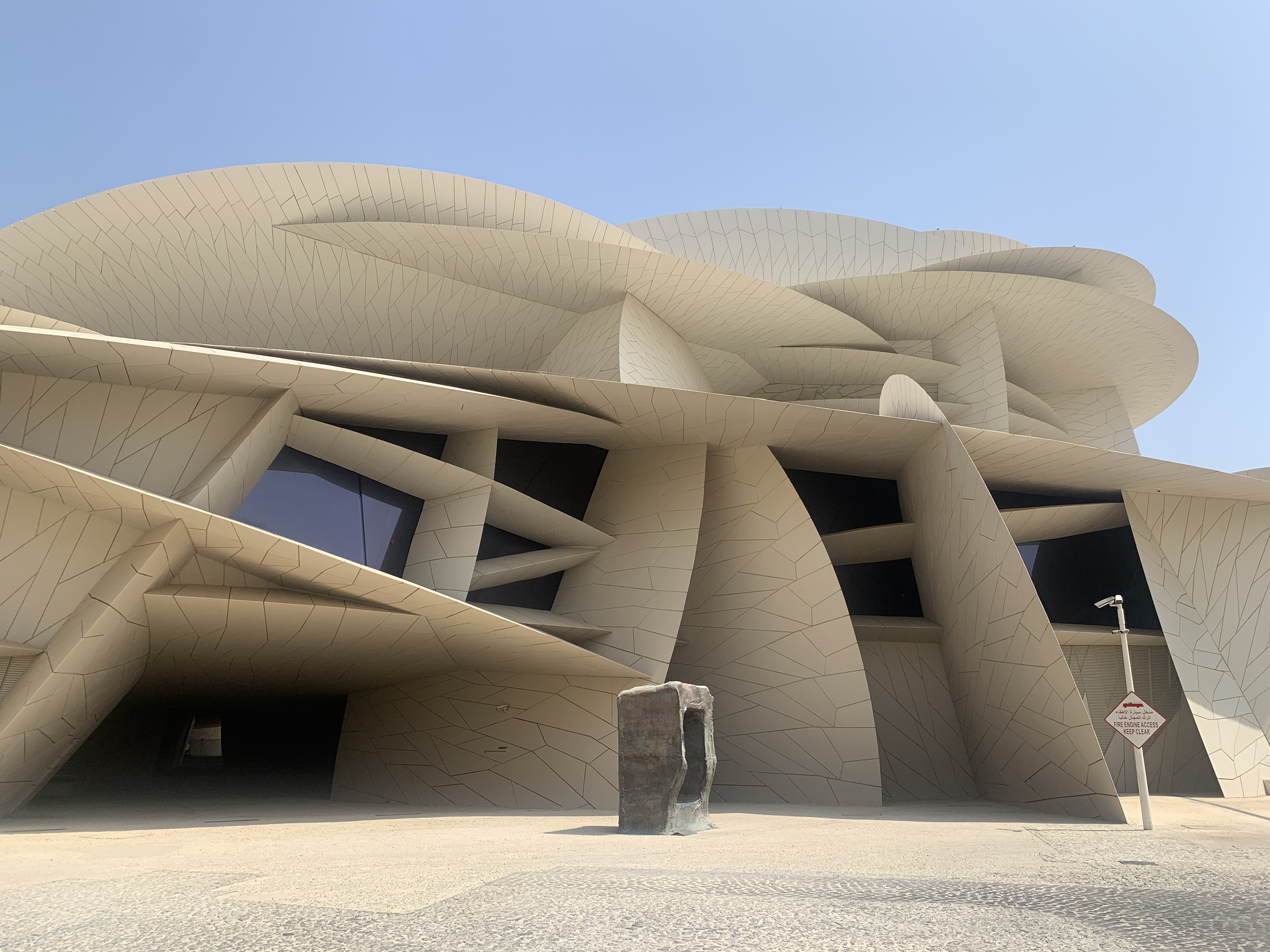 The story of Qatar and its people over the decades comes to life in the form of handicrafts, dress, poetry, song plus interactive games and puzzles for children in the 11 interactive galleries, which also span geology, archaeology, the natural environment and Qatar’s discovery of oil.

Open through the week, entry is QR50 ($12) and it takes no more than 10 minutes to reach by coach from the Grand Cruise Terminal.

For a more eclectic selection of artefacts, passengers can step into the 1998-founded Sheikh Faisal Bin Qassim Al Thani private museum filled with over 30,000 artefacts displaying Qatari heritage, carpets, weapons, vehicles, jewelry and currency collected by the sheikh over several decades. It brings together everything from dinosaur fossils and an old house from Damascus (deconstructed and reassembled,) a room from a traditional Yemeni house and Arabian Oryx – the symbol of Qatar and Qatar Airways – which can be seen in the grounds.

Guided tours in multiple languages are available or passengers can utilise a free app for self-guided tours, plus it has workshops dedicated to aspects of the museum’s exhibits throughout the year.

While passengers in Doha can revel in the feel of the Orient, they can just as easily soak up the Venetian flare of Qanat Quartier close to the Grand Cruise Terminal or else grab an inexpensive Uber ride to a fine Parisian style boulangerie in the sprawling luxury shopping plaza, Place Vendome in in Lusail City. The luxury mall plus Doha’s sustainable Msheireb Downtown are among the key new attractions available to cruise passengers.

The former, which opened in April, has no less than 560 retail outlets and casual and fast-food dining areas, while catering to high-end visitors with stores such as Chanel, Dior, Gucci and Louis Vuitton. 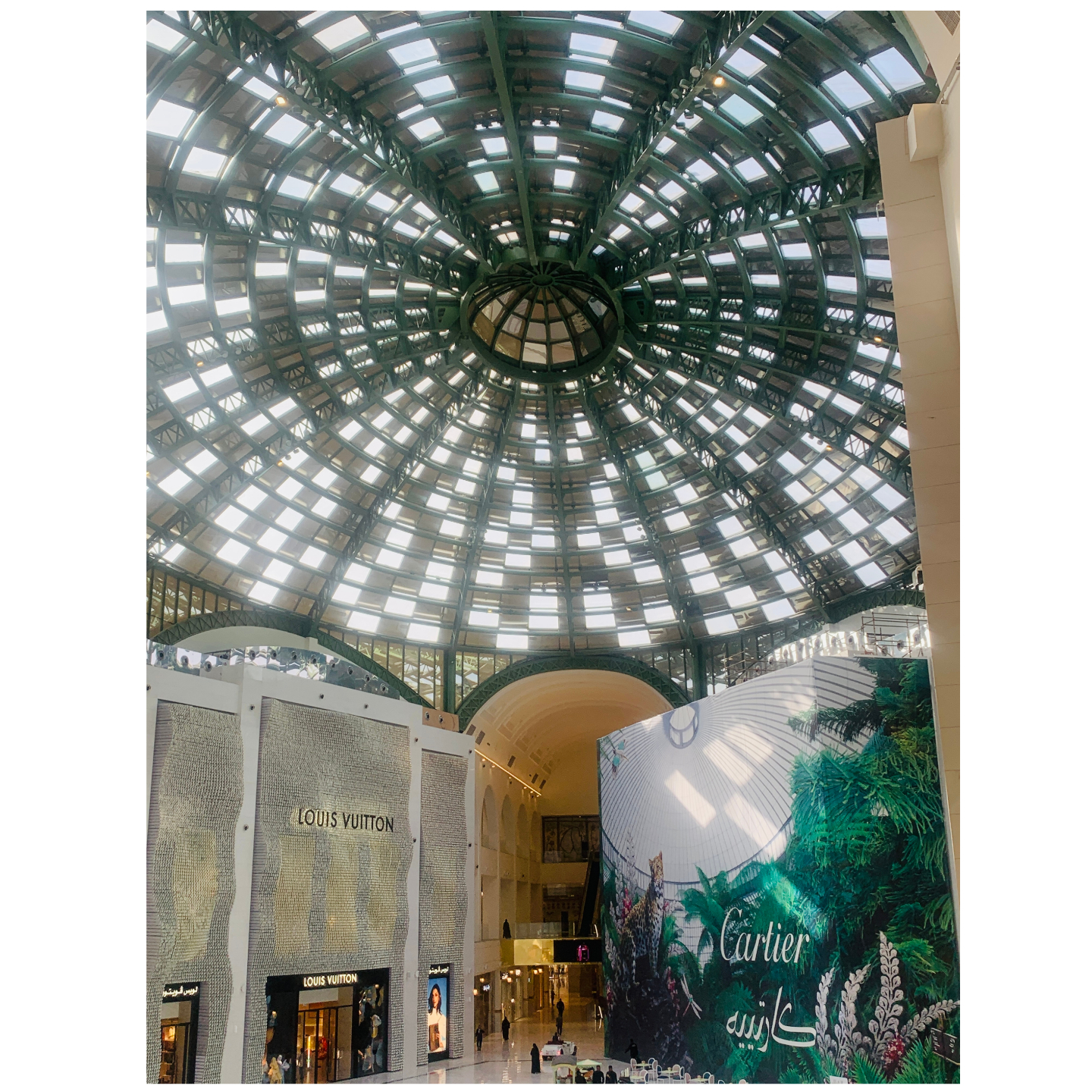 A striking dome can be seen in the building, with architectural elements running throughout inspired by Parisian street Rue de la Paix.

The mall has an entertainment area complete with cinema, and six ‘dancing fountain’ water shows daily with evening performances accompanied by projections. It also has a canal running through it directly from the sea, making for an open plaza experience with cafes and restaurants overlooking water.

The 1,150,000mtr. sq. venue is a couple minutes’ walk from the nearest metro station or 30 minutes from the new terminal by vehicle.

In contrast, Souq Waqif is the city’s oldest marketplace filled with stalls selling antiques, spices, food, jewellery and clothes, and the location of Le Pouce (The Thumb) – a two-storey high gold thumb by artist Cesar Baldaccini. 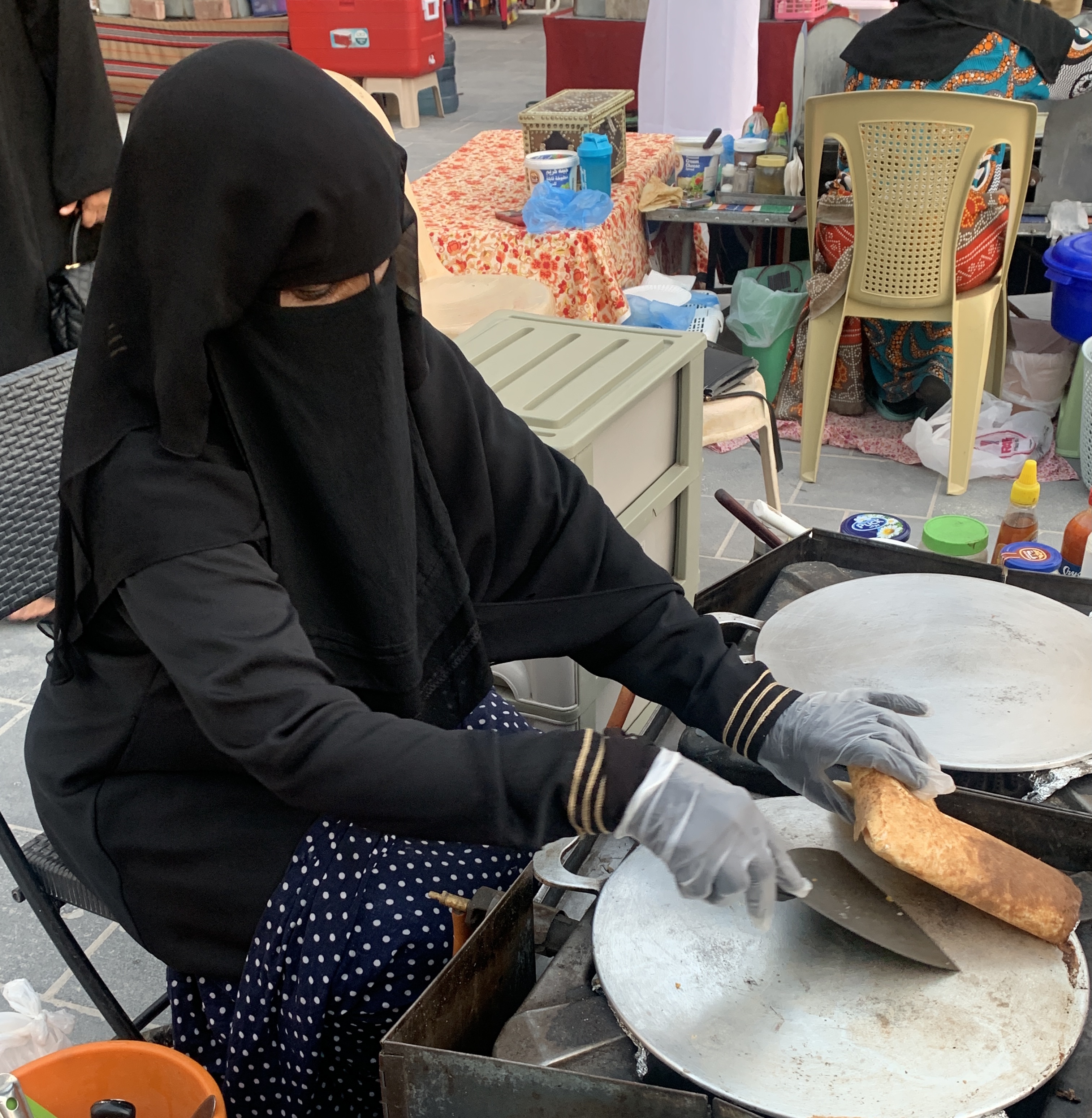 Msheireb Downtown located next to Souq Waqif serves as the world’s first fully built smart and sustainable city, according to Visit Qatar. Filled with restaurants, museums and boutiques, its buildings are either Gold or Platinum LEED-certified and comply with the highest standards in green building services. It is home to Msheireb Museums and large pedestrian square Barahat Msheireb.

Pearl by name, pearl by appearance: The Pearl located close to the Grand Cruise Terminal is an artificial island with hotels, cafes, restaurants and boutiques in abundance plus the iconic Porto Arabia Marina where passengers can take a stroll. Katara Cultural Village located between West Bay and the Pearl on the other hand is considered a cultural capital of the Arab world and offers 360-degree views across the city.  Its vibrant blue Katara Mosque set within the 3,000 sq. mtr. complex is designed by female architect Zainab Fadil Oglu and adorned with handmade tiles brought from Turkey. The eye-catching Golden Mosque is also one of Oglu’s works.

Blending classical architecture with Arabic architecture, the village’s amphitheater brings a new performance to audiences every three- to four weeks, showcases a philharmonic orchestra every month and has capacity for 5,000 people. 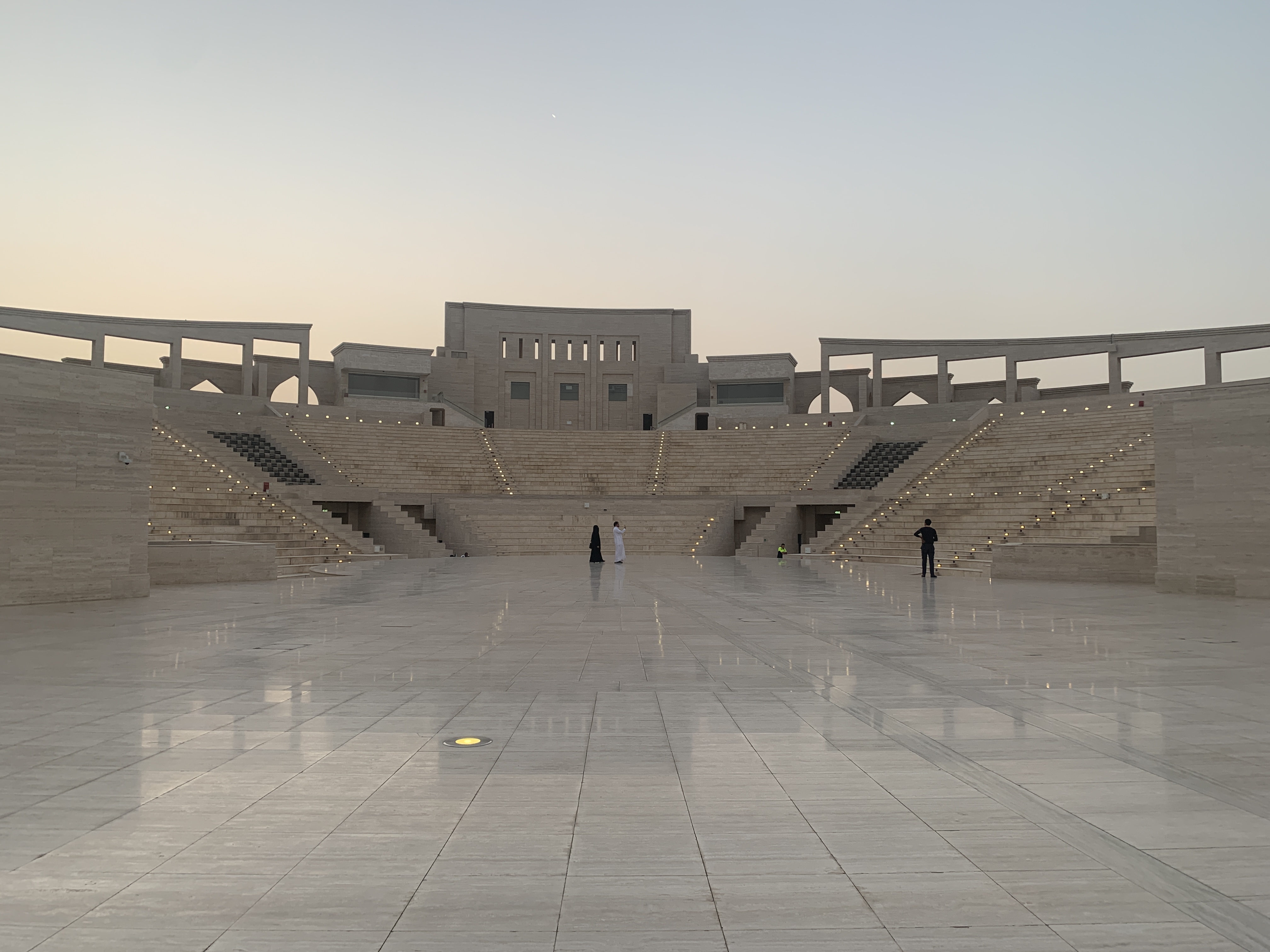 Restaurants and cafes, a seafood market, maritime museum, planetarium, art galleries and workshops, and pop-up auctions otherwise fill the village. Thought provoking art installations include The Mother Nature made in Venice and inspired by the 2004 tsunami and a seven- by three-metre key that pays tribute to displaced Palestinian refugees and awarded a place in the Guinness World Records in 2018 for its size.

Katara is a 20-minute coach ride from the Grand Cruise Terminal with shore excursions usually lasting up to 30 minutes. It also offers wakeboarding, kitesurfing and scuba diving.

A dry country in keeping with Qatar’s Islamic faith, Opus Bar in Park Hyatt is one of a strictly limited number of venues where alcoholic beverages can be purchased, and boasts a rich cocktail menu. For authentic Middle Eastern flavours, passengers can head to Parisa in Souq Waqif serving Persian fare against a radiant, embellished backdrop that combines hand-painted Persian artwork of myths and legends, intricate mosaics, ornate chandeliers and thousands of tiny mirrors handpicked in Iran and assembled in Doha over three-and-a-half years. 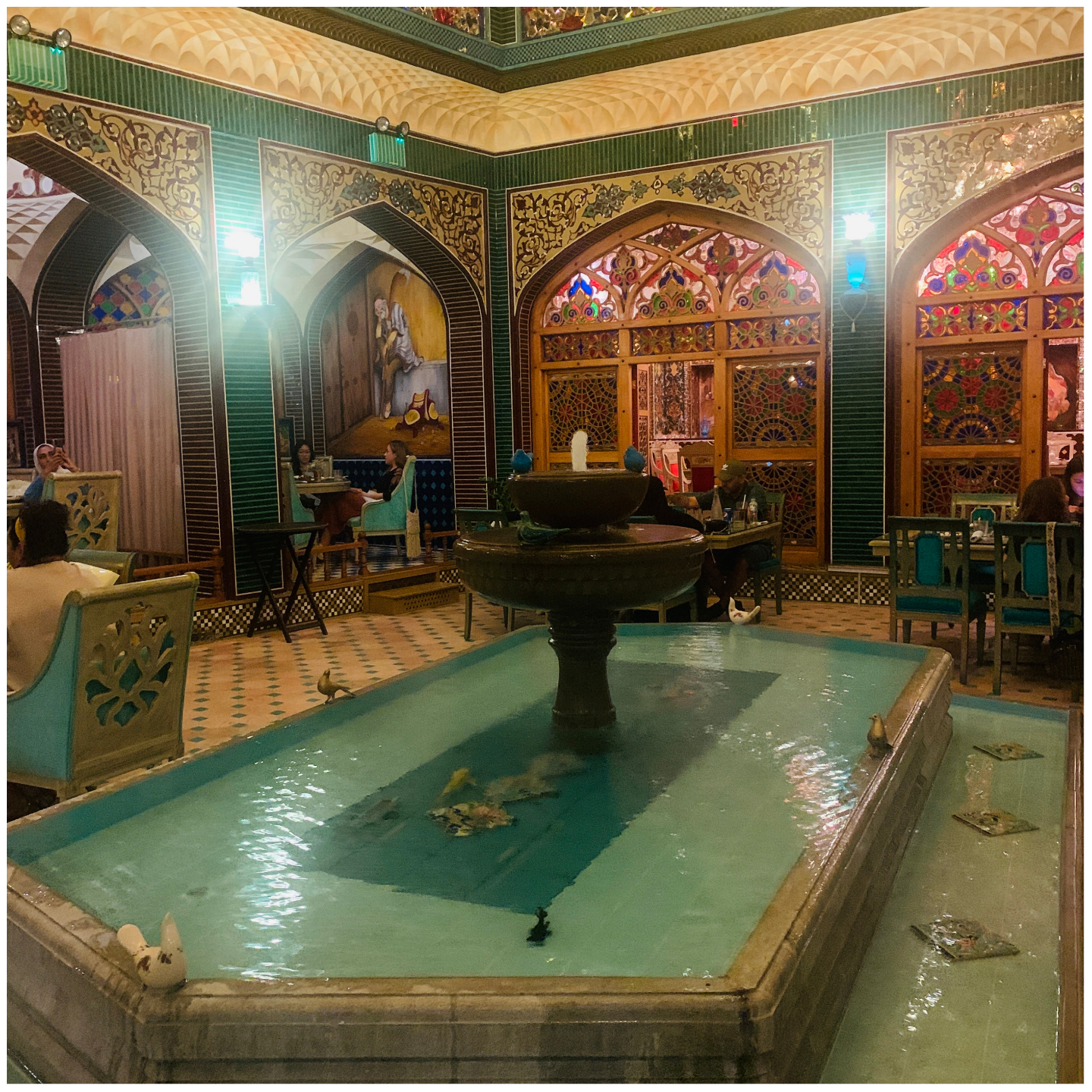 For a quick bite that doesn’t skimp on quality, artisanal café Rusk in Msheireb Downtown has a wide option of breakfast and lunch options with dainty desserts or for an international dining experience, passengers can head to art gallery and Italian restaurant Cafe #999 for pizza, pasta and more.

The waters of Khor Al Udaid, a UNESCO World Heritage-recognised site lies to the south of the city, and is one of the few places in the world where the sea encroaches into the desert. The inland sea is 90km from Doha and accessible by 4x4 vehicles only with journeys typically starting at sunrise. 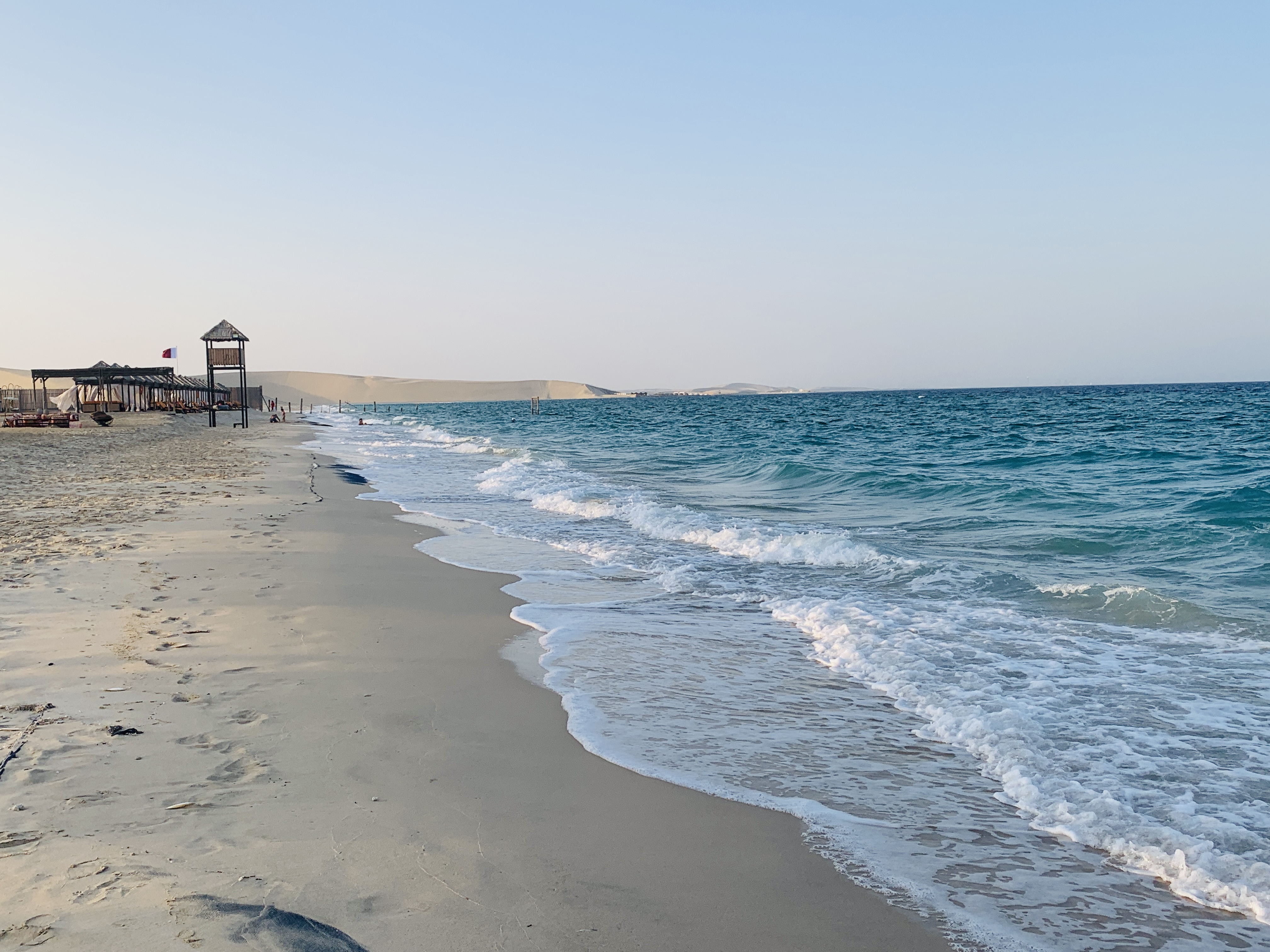 The waters of Khor Al Udaid

For a less adventurous experience, passengers can make their way to Lusail City, which is just a year old and has a 2.5km-long beachfront set against uber-modern skyscrapers. An entry fee of QR25 however applies. 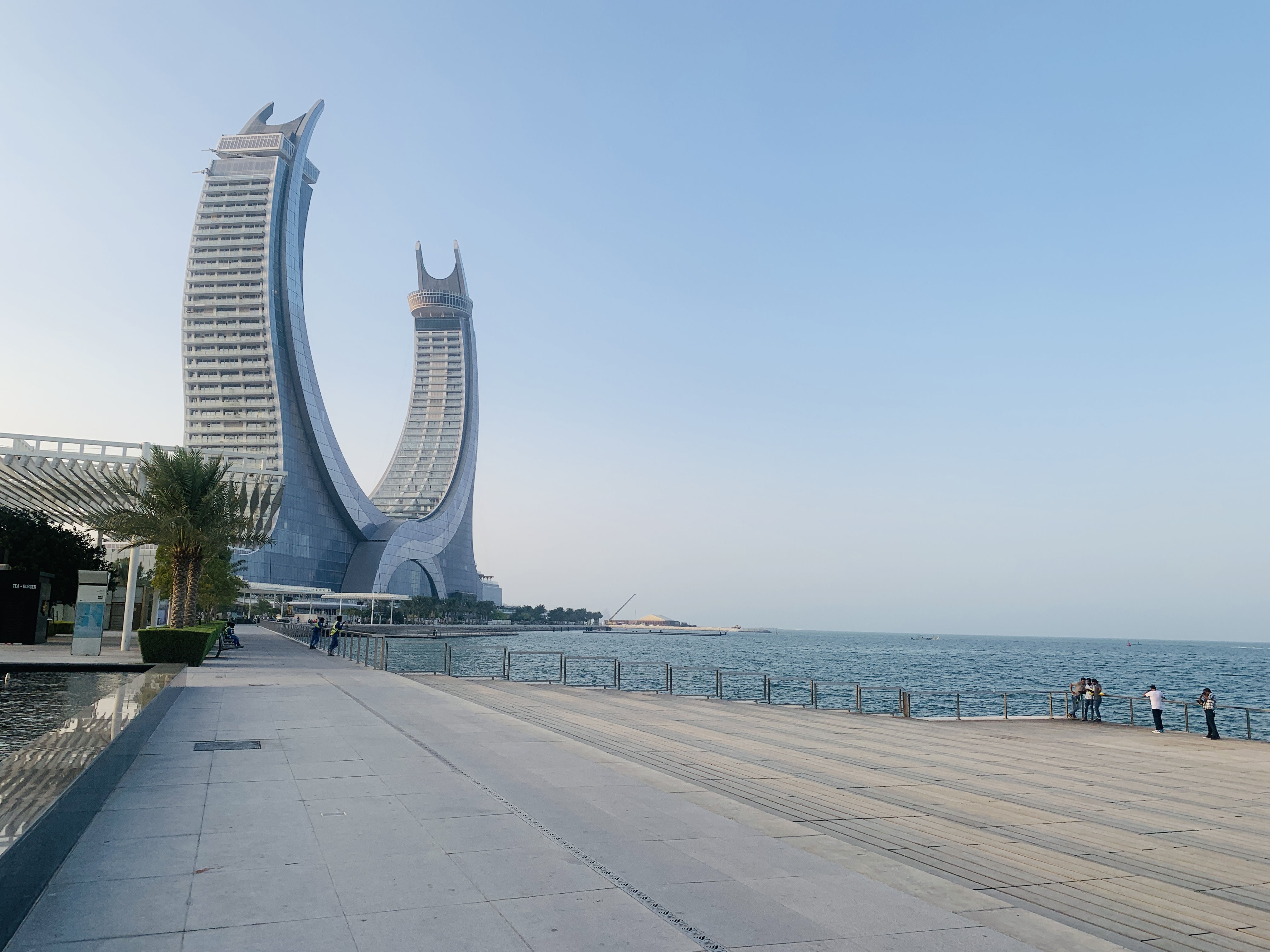 An additionally luxurious experience can be had at Plaza Alhambra 20 minutes from the Grand Cruise Terminal by coach.

With all journeys priced at $0.40, Doha’s metro network was created with the World Cup in mind according to Qatar Tourism tour guide Boutayna Iraqi and it extends throughout the city alongside a ready network of trams for easy access from the cruise terminal to the eight football stadiums. Stadium 974 close to the new port was built sustainably from recycled shipping containers and modular steel. After the big event, it will be dismantled, and components donated to countries with little sporting infrastructure.

The Museum of Islamic Art, currently under renovation, reopens in November coinciding with the game. Other popular attractions for cruise passengers include Al Zubarah archaeological site on Qatar’s western coast. Unvisited by cruise passengers last season, it takes one-hour to reach by coach and is the country’s first UNESCO World Heritage site.

A 30-minute drive from the port are the elite Al Shaqab equestrian stables. While no riding can be undertaken by cruise passengers, it allows pax to see and learn about the breed.  Alternatively for animal lovers, a two-hour journey from the port brings passengers to a location frequented by whale sharks from May-October. The longer journey was previously offered to passengers by Costa Cruises from Qatar Cruise Port as part of an overnight stay in the city.

Kayaking in mangroves, sailing in a traditional dhow boat or spotting Arabian Oryx and antelope at private reserves can also be experienced by cruise passengers.