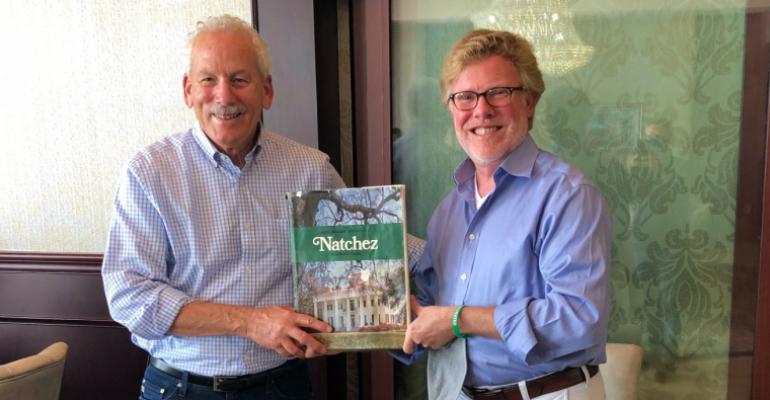 What's a river town without riverboats? That's been the sad story on the Lower Mississippi for a year. Until now.

Riverboats resumed sailing mid-month and this week, after a year since its completion at Gulf Island Shipyard last March, American Countess of American Queen Steamboat Co. is up and running.

That means a lot to river towns like Natchez.

The economic impact is 'significant,' Mayor Dan Gibson said. 'Cruises provide a steady flow of visitors to our area on an annual basis.' This helps support businesses like the historic homes, restaurants, shops, tours, carriage rides and the growing offering of African American history tourism.

'Natchez loves the American Queen and we had the American Duchess last week as the first paddlewheeler back, and I'm thankful we now have American Countess,' Gibson said. 'Three of the finest boats in America, cruising the Lower Mississippi and coming to Natchez every week.'

With the three — after American Queen starts later this year, and American Countess gets up to full capacity, 245 passengers — that will be 832 AQSC passengers weekly, plus crew.

'This means large numbers for Natchez,' the mayor said.

Gibson was aboard American Countess this week for his first cruise of any kind, and he extolled the boat's library where he remotely conducted mayoral affairs, the Sun Deck walking track, the dining room with its 'exquisite crystal chandeliers,' the 'breathtaking Grand Lobby, impressive yet also very comfortable,' the staff and entertainers and the Southern hospitality. He even took a turn at the piano.

In The Grand Dining Room, 'When the servers asked the ladies for their orders first,' Gibson nudged a companion and said 'I can tell they were trained in the South.'

After its naming in New Orleans last Sunday, American Countess embarked on a weeklong cruise to Memphis carrying family and friends, VIPs and media. It's been a test run for the first revenue sailing from Memphis on Sunday.

When the paddlewheeler rolled into Natchez, it was greeted by cheers from a small crowd with a banner, and a reception honored AQSC CEO and founder John Waggoner. Gibson called Waggoner 'an American success story.'

'People are so excited the boats are finally coming back,' Waggoner acknowledged by phone from the boat.

He said the trip had gone well. And even with protocols like masks, 'It's great to see the guests on board enjoying themselves.'

With the riverboats' return to service, sales doubled this week over last. According to Waggoner, 'It's because we put out our "open" sign: Duchess and Countess are sailing.'

While the company's vaccination mandate doesn't kick in until July 1, more than half the people on this first American Countess jaunt are vaccinated.

'Folks 65 and over are our demographic,' Waggoner said, but even with this week's younger group, many reported already having their shots.

He's pleased how the pre-cruise PCR testing procedure, part of protocols managed by partner Vikand Solutions, went. AQSC includes a pre-cruise hotel night, and passengers get tested before embarking the next day. The company also encourages people to get tested at home to catch any positives before travel.

As for Natchez Mayor Gibson, he hopes that 'with their successful and responsible handling of COVID protocols, their numbers will increase dramatically over the balance of 2021. We are excited ... and we are so proud of this American company that has survived the pandemic only to come back stronger.'