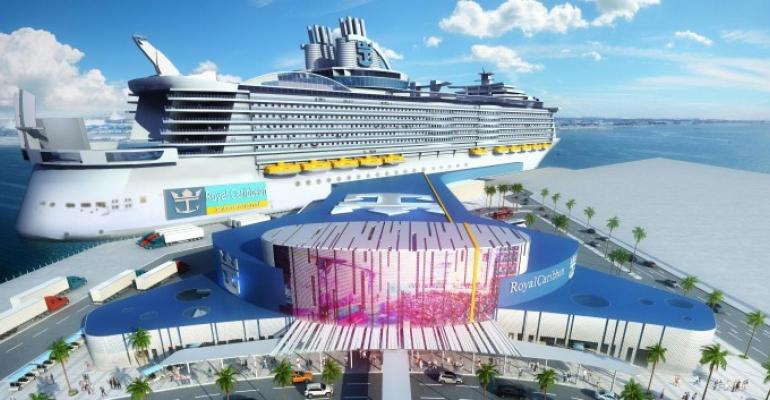 Bookings are open for Galveston's first Oasis-class cruises on Allure of the Seas starting in November 2022, but the new terminal's financing is not yet in place

The Galveston Wharves Board will consider whether to give Royal Caribbean another extension to build its planned $100m cruise terminal and to let the company off the hook for paying rent there until, latest, fall 2023.

Under the current terms, completion is required by the end of July 2023, however the goal was to substantially finish the terminal by fall 2022.

Just days ago, Royal Caribbean told Seatrade Cruise News it had completed its due diligence on time, initiated the first stages of construction and was 'on schedule for our opening in November 2022.'

Now it's clear that getting financing during the pandemic is proving more challenging than expected.

Earlier this year, Royal Caribbean disclosed an agreement to transfer 50% of its Galveston cruise terminal interests to Macquarie's Ceres Terminals, which is to manage the new facility and provide stevedoring services.

Due to the COVID-19 pandemic 'and the resulting difficulties in obtaining project financing,' the amended ground lease would extend the terminal's completion deadline to Dec. 31, 2023, according to the agreement up for the Galveston Wharves Board's consideration.

However, Royal Caribbean would 'continue to use commercially reasonable efforts to substantially complete the project by the target completion date' of Sept. 1, 2022, subject to its 'ability to obtain satisfactory project financing.'

Rent payment would commence when the first ship berths at the pier, but not later than Sept. 30, 2023, according to the amended agreement.

And Royal Caribbean will no longer have the right to terminate the ground lease.

If approved during Tuesday's board meeting, this would be the second extension for Royal Caribbean, which inked its deal with Galveston in December 2019 to build a 170,000-square-foot terminal to handle the port's first Oasis-class ship starting in fall 2021. Last April, the Galveston Wharves Board gave the company an extra year due to the pandemic.

No income from 10-acre site for at least two years

The new terminal would sit on a 10-acre site, a chunk of real estate that will have been tied up for at least two years without income for the port.

CEO/Port Director Rodger Rees last week said Galveston was preparing for a phased resumption of cruises 'as early as July, just to be ready,' adding: 'Current indications are that cruises could resume by late this summer or early fall.'