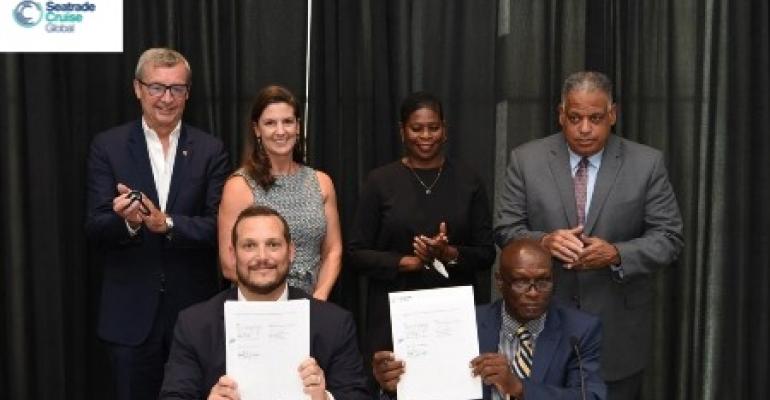 The MOU is a fresh commitment from Royal Caribbean to extend its current 10-year preferential berthing at agreement at VIPA’s cruise facilities in Crown Bay and Frederiksted (St. Croix).

Michael Bayley, president and CEO of Royal Caribbean International, said, ‘I am delighted that we are entering into this MOU,’ highlighting that the pandemic had ‘shown us how we need to pull together, work together, communicate and collaborate.’

The announcement was made today at Seatrade Cruise Global in Miami Beach, where the company also committed to help expand the Austin ‘Babe’ Monsanto Marine Facility in Crown Bay to allow berthing of Icon- and Quantum-class ships and the development of a third berth.

'Unified goal’ in a challenging period

Royal Caribbean has 'committed to a major infusion of capital as well as guaranteed cruise visits to our islands,' VIPA Executive Director Carlton Dowe said. 'In this currently strained economic climate, this substantial commitment indicates Royal Caribbean Group’s dedication to the people of this territory and our economy.’

He added, ‘This MOU extends what has been an exceedingly amicable, reliable and beneficial arrangement for both parties. Our unified goal is to ensure that the US Virgin Islands is a premier destination in the Caribbean.’

‘We will negotiate in earnest to do the best we can to make sure these projects come true,’ USVI Gov. Albert Bryan Jr. said, ‘And not only the projects, but making sure we involve the local people, whether it’s in the construction of the work that we undertake or what we distribute and sell once those cruise ship projects and ports are completed.

His remarks were followed by Josh Carroll, VP destination development and deployment, Royal Caribbean Group, who said, ‘Over the years we’ve each had ups and downs as entities, but we’ve been there for one another.’

‘We’re the largest guest deliverer to St Croix … We want to make it an even greater destination. And St. Thomas.’

‘We are absolutely going to be focussed on sustainability,’ remarked Jayne Halcomb, director, Caribbean & Americas destination development, Royal Caribbean Group. ‘We want to be great corporate citizens to the territory to stimulate the economy.’

The company will focus on some of the community projects in the pipeline in St. Croix, working with the territory’s chamber of commerce to develop the guest experience and create higher tourist numbers.

Royal Caribbean’s existing agreement with VIPA was made in June 2016.