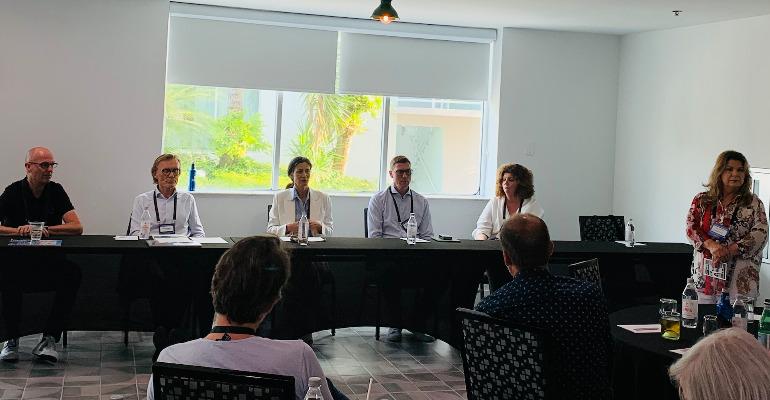 Inge Tangerås, CEO, Cruise Norway said northern ports ‘expect more than 30% growth’ in the coming year with ‘the shoulder season becoming increasingly important,’ and ‘another seven [ports] are planning shore power within one to three years with Norway ‘becoming a world power in shore power in a few years.’

According to Cruise Norway forecasts, the destination is set to receive 2,950 cruise calls this year – an increase on 2019’s figures, which stood at 2,262 calls.

‘Norway is safe, all coronavirus restrictions have been lifted and society has returned to normal. It is unaffected by the war in Ukraine. Norway has received quite a few refugees from Ukraine, but Norway is well prepared to handle this,’ he added.

The comments were made during a Scandinavia destination update moderated by cruise consultant and Seatrade Cruise expedition ambassador, Liz Gammon, ahead of Seatrade Cruise Global in Miami.

Growing efforts to establish shore power across the region was discussed, with Barbara Scheel Agersnap, CEO, Copenhagen Malmo Port encouraging lines to ‘be more courageous' in preparing vessels to receive shore power. In 2024, it will implement a 32mv shore power facility in Copenhagen, with three connecting points at Ocean Quay and Langelinie. This year, it will offer a free fully electric shuttle bus on all turnaround days running between the three terminals at Ocean Quay and Metro station Orientkaj. ‘We had a very good season last year and we think it’s going to be very strong this year,’ she said. 'We’ve been very focussed on sustainability issues, we’re pretty ambitious on it.'

Added Stefan Scheja, manager cruise and ferry, Ports of Stockholm, which continues to develop shore power connections, ‘Cruise lines see that we are investing in shore power… we are getting questions from them about it.’

Aspirations for lines to committ to shore power in the Baltics

Claus Bødker, director of cruise, Cruise Copenhagen and director, Cruise Baltic alluded to the recent signing of a Memorandum of Understanding by 19 cruise brands. Under the MoU, the lines commit to using shore power, available at ports in the Baltic Sea, as soon as possible and no later than from January 1, 2024. ‘We are hoping to have more cruise lines sign up,’ he said. ‘I honestly believe cruise lines have changed their understanding on sustainability' and said lines 'are beginning to understand they can’t survive' without becoming greener.

Scheel Agersnap went on to highlight efforts to improve the image of cruise ships in Copenhagen, encouraging locals to ‘look forward to cruise ships as much as we do at the port,' while Bødker conceded, ‘We hear a lot of complaints from residents in Copenhagen... but maybe the same people are always complaining.’ He went on to outline plans for a survey which will take account of locals’ concerns around cruise calls in Copenhagen. ‘We went to get some numbers on it,’ he asserted.

Itinerary Planner, a planning tool launched by Cruise Baltic and Cruise Norway, collectively, help in ‘facilitating better flow of ships coming in and out [or ports]’ stated Tangerås. On May 1, Copenhagen Malmo Port will launch its new Cruise City application to help cruise passengers navigate more easily around the city, encouraging smaller groups in more locations.

Speaking in reference to Norway, Tangerås stated, ‘The municipality decided on how much cruise tourism it wants. Such decisions should be based on facts rather than populist ideas. We are confident the Norwegian democracy can deal with this.’

On how the conflict between Russia-Ukraine may impact the region, he stated, ‘We have to see,’ with Gammon highlighting, ‘It’s new territory… It’s such a fluid situation, we don’t know what the cruise lines are thinking’

Working on boosting its visibility is Visit Stockholm whose director of sales and operations, Karin Mantymaki, said the company ‘has worked with small companies in Stockholm to become more visible’ while promoting its outdoor experiences.

Visby is currently training more tour guides for this season.

Lysekil is the latest port to join the Cruise Baltic network, it was revealed. The port, which can handle vessels up to 240mtr, ‘receives on average two to three calls a year,’ said Henning Schou, director, SDC Cruise, which took over the port from the local municipality back in 2019.

He went on to add that the destination aims to continue attracting ‘small, more niche’ cruise ships, ‘up to a maximum of 10 calls per year,’ with Fred. Olsen Cruise Lines already a repeat caller.

Malmo will provide a sewage barge for cruise calls, connecting to the outside of cruise vessels at Langelinie and Nodre Tolbod. Plus, at Langelinie cruise terminal, a new sewage system has been installed that will be operational from 2023.

Roenne is working on enabling the bunkering of sustainable fuels for cruise ships by 2025.