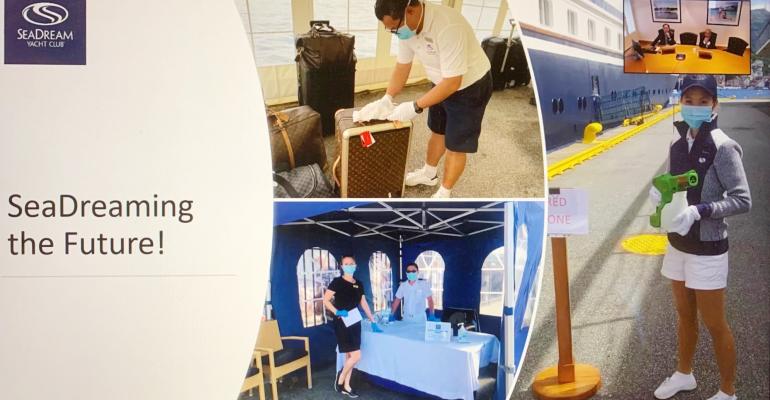 SeaDream Yacht Club is considering a new weeklong Barbados itinerary that would replace its planned Caribbean program this winter.

Calls at St. Vincent and the Grenadines and Grenada

The itinerary includes St. Vincent and the Grenadines as well as Grenada and would start Nov. 8, if it goes ahead.

When looking at the upcoming Caribbean season, SeaDream — which successfully restarted cruise operations in Norway on June 20 on only four weeks' notice — thought of trying something different from its published plans, explained Emilio Freeman, VP itineraries and destinations, during a webinar update Thursday.

Freeman researched places SeaDream would be welcome and that are currently open for tourism, along with more secluded destinations in tune with the company's yachting flavor.

'Where billionaires go to get away from millionaires'

Freeman said these stops offer friendly people; 'smooth, silky sand beaches'; and are places where the rich go to get away. (One destination he cited as 'where billionaires go to get away from millionaires.')

Nothing is decided, SeaDream EVP Andreas Brynestad said, but the company hopes to make a decision this month. Besides the webinar — which drew more than 700 people when only 50 or so had been expected — SeaDream is trying to reach out to booked guests to get their thoughts about the Caribbean this winter.

Travelers most likely will be tested for coronavirus three times before embarking, Brynestad said. Barbados requires a negative test taken within 72 hours before arriving at the airport and likely would test travelers from high-risk countries like the United States upon arrival, plus SeaDream would test everyone before they embark.

Brynestad said SeaDream will have a PCR test with quick results — 50 people an hour can be tested. Travelers also would get temperature and oxygen saturation checks. Temperature checks take place every time people come aboard from shore visits, and crew temperatures will be taken daily. Brynestad said the PCR test is 'gold standard,' compared to the routine antibody testing SeaDream has been doing in Europe.

If someone were to become ill, they likely would be taken ashore to a designated hospital or hotel for quarantine, depending on their condition. Planning with individual countries is still under way.

On the webinar 'SeaDreamers' — as one brand loyalist called themselves — asked if they would have to stick to excursions in order to go ashore, and the company doesn't currently anticipate that.

On-board protocols include electrostatic fogging of luggage and public areas, no self-service and UV-C treatment of accommodations after nightly turndown service, among others.

In SeaDream's Norway program, which continues through September, one former passenger later tested positive on arriving home in Denmark. Everyone on SeaDream I was immediately quarantined on board and PCR tested, and all were negative so the voyage continued. The Danish man subsequently retested negative.