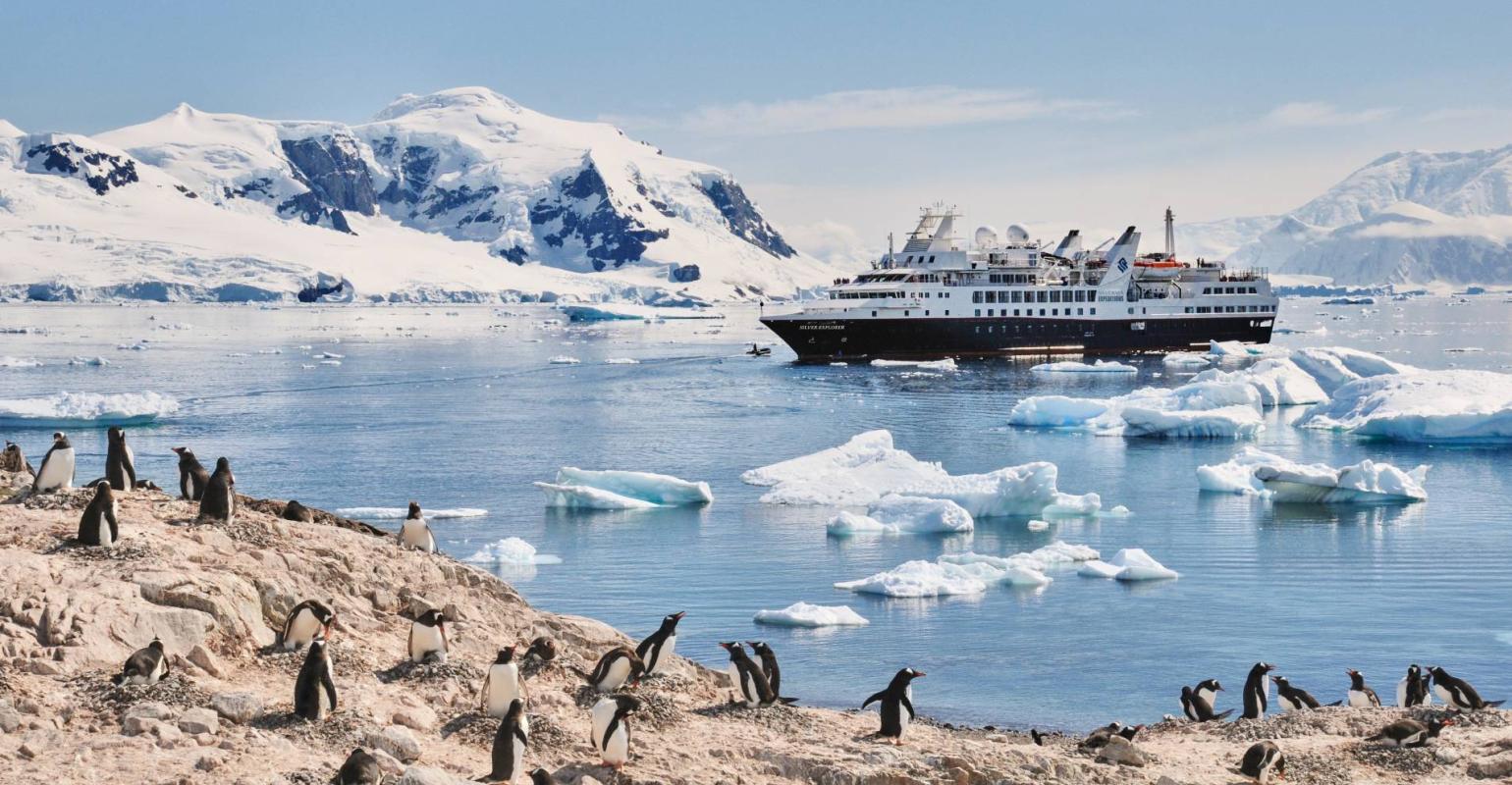 A choice of 30 Antarctica voyages on four ships. Here, Silver Explorer
Silversea Cruises opened an exclusive pre-sale to Venetian Society members for 315 new voyages in 2022-23 — the largest itinerary release in the line’s history.

With Silversea becoming more inclusive, shore excursions and air are bundled into all voyages in the new itinerary collection.

In addition to 61 maiden calls — which include Eidfjord, Norway; Rio Guajara, Brazil; and Foula in the United Kingdom, among others — the new collection comprises a reimagined range of expedition voyages, including one that goes deep into the Amazon rain forest; all-new journeys to many iconic destinations and lesser-known gems accessible only to small ships; and a range of departures focused on world-renowned events.

Highlights include 30 Antarctica voyages, the most extensive program Silversea has offered, with three itinerary lengths. Silver Explorer, Silver Cloud and Silver Wind will cruise to the White Continent in 2022 and 2023.

New 'Antarctica Bridge' itineraries offer the option of spending five, six or nine days in Antarctica, while a new 'Deep Antarctica' expedition travels further south along the Antarctic Peninsula over 20 days, journeying through the Bellingshausen Sea and Marguerite Bay to cross the Antarctic Circle, attempting to reach 69˚S should conditions permit.

Twelve voyages to the Arctic and Greenland will operate aboard Silver Wind and Silver Cloud. In Svalbard, new shorter cruise options of six and nine days — round-trip Longyearbyen — enable time-pressed travelers to discover the best of Svalbard’s northern and southern regions. A 24-day Northwest Passage aboard Silver Wind travels from Kangerlussuaq to Nome, while a new voyage to Disko Bay, Greenland, features vast icebergs and, potentially, whales.

Building on Silversea's offering in the Adriatic, the Western Mediterranean and Iberia, the new voyage collection includes diverse itineraries in the Eastern Mediterranean, Black Sea, Greek Islands and the Holy Land aboard Silver Spirit.

An expansive season in Northern Europe and the British Isles sees four ships in the region, with Silver Cloud offering two new expedition itineraries to the British Isles and the Atlantic Coast. There will be more options to discover the Norwegian Fjords, building on Silversea’s offering in the Baltic and Iceland aboard Silver Wind and Silver Whisper.

As part of Silver Moon’s first Northern Europe season, travelers will discover immersive culinary experiences through the S.A.L.T. culinary program on 16 voyages. Bordeaux, St. Petersburg, Helsinki, Bergen, Flåm and Ålesund are some of the ports. Among the 17 maiden calls are Arduaine, Baiona, Bryer and Calf of Man.

Alaska and the Russian Far East

Expanding options with 29 itineraries between two ships, Silver Shadow will join Silver Muse in Alaska for an extensive season of seven-day voyages between Seward and Vancouver, BC. One highlight is an 18-day expedition aboard Silver Wind to the remote cultures and wildlife of the Chukotka Region, as well as the Hubbard Glacier, Sitka and a maiden call at Chegitum.

Silver Explorer, Silver Muse, Silver Whisper and Silver Shadow will sail a total of 31 voyages in Australia and New Zealand. On top of the Kimberley, Silver Explorer will complete an all-new 17-day itinerary featuring the Dampier Archipelago and the Monte Bello Islands, before venturing as far south as Freemantle. Silver Muse will offer shorter options of 12 and 13 days throughout Australia and New Zealand, staying overnight at Hobart, Tasmania. Longer voyages incorporate Asia and Melanesia.

Among 24 Asia sailings, Silversea’s offering in Japan — which, with the new 2022-23 collection, includes four voyages during cherry blossom time — will be enriched with new turnaround ports and added choice. As well as Tokyo, travelers can embark at either Osaka or Kobe. In addition to a new cruise through Japan and South Korea, there will be overnight calls at Hong Kong, Bangkok, Osaka and Seoul, among others. All-new routes travel through China, Japan and Thailand.

Three new expeditions aboard Silver Explorer visit the Indian Ocean with in-depth explorations of the Mozambique Channel, the Seychelles and the Andaman Sea and the Mergui Archipelago. Silver Spirit will sail two new itineraries among five classic cruises, with long stays at Myanmar, two Suez Canal crossings and newly added calls at Jeddah and Petra. During an Arabian Gulf trip, Silver Spirit will stay in Doha for two overnights during the FIFA World Cup 2022.

In addition, Silversea ships will sail 22 cruises in the Caribbean and Central America and a new Bermuda itinerary, 47 voyages in the Galápagos aboard Silver Origin, five voyages in the South Pacific, six between the US West Coast, Canada and New England and 12 trans-oceanic voyages.