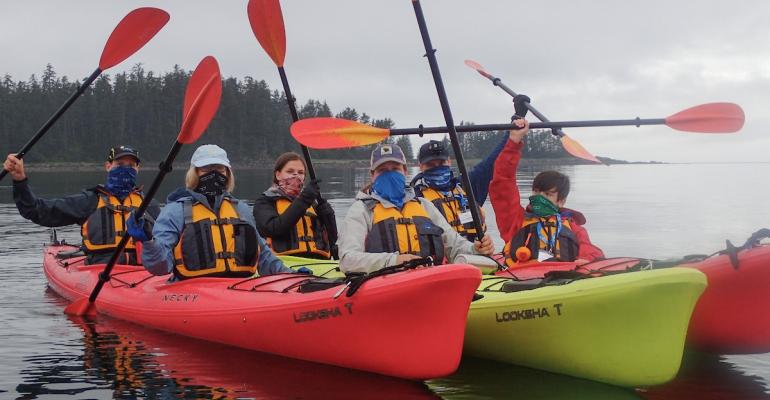 UnCruise provides a 'uniquely good bubble product' in the COVID era, Dan Blanchard said. The focus is on unpopulated nature areas and, during the day, most travelers are off in small groups of six to 12, hiking, kayaking or riding skiffs
Alaska cruising is not completely out for the summer.

Nor do their vessels carry enough people to be under the US Centers for Disease Control and Prevention's conditional sailing order purview.

Though Blanchard called Canada's decision 'devastating for Alaska, my home state,' and choked up speaking about the pain to communities and businesses, big-ship lines and travel advisors, he's glad the small US-flag operators will be able to sail.

'We are proud of our American roots and together with other US cruise operators, we look forward to contributing to the local economies that are impacted so significantly by the Canadian order,' he said.

Blanchard chairs the US Overnight Passenger Small-Boat Operators Coalition and is actively engaged with the administration and lawmakers in Washington, not just on opening cruising but also government support to make sure the US-flag sector isn't passed over for stimulus funding.

The coalition is working with the CDC, too, for some of the larger vessels (those carrying at least 250 people, which are subject to CDC's conditional sailing order) and advocating for support to shipyards so they can survive and provide repairs.

As for short-term exemptions to the US Passenger Vessel Services Act to allow foreign-flag competitors to sail Alaska, Blanchard doesn't speak for his fellow US lines but said he'd personally support that because Alaska needs the big-ship business. He considers it a high hurdle, though, with the will in Congress probably lacking and no historical precedent.

UnCruise plans to begin sailing from Juneau May 16 — a bit later than its usual April start — with six ships set for the season and one in reserve in case the market comes back strongly.

The line provides a 'uniquely good bubble product' in the COVID era, Blanchard said, because 'We are not an on-the-boat company.' The focus is on unpopulated nature areas and, during the day, most travelers are off in small groups of six to 12, hiking, kayaking or riding skiffs. The line is adding more meals and barbecues ashore.

Initially, UnCruise has a triple testing protocol. Alaska requires a PCR test taken within 72 hours before arrival (or on the spot if not taken within that window) and UnCruise mandates two antigen tests, one at embarkation and one on day of sailing, plus further testing of crew and passengers during the voyage.

This year the line will have PCR test kits on board — unlike last summer when it had to abruptly end its first voyage, and the season, when a traveler's airport arrival test came back positive a few days into the cruise. Everyone was quarantined. A subsequent test was negative. There was no illness among passengers or crew.

According to Blanchard, Alaska has already vaccinated 20% of its population, making it one of the leading states for vaccine dissemination.

UnCruise isn't initially mandating the shots — unlike fellow US-flag operator American Queen Steamboat Co. — though Blanchard expects a high percentage of his customers to be vaccinated.

'This will be less of an issue by the time we get into May, June, July with our guests but more of an issue with our maritime and service crew,' he said.

As for crew, UnCruise supports a Juneau-led campaign to get Alaska tourism workers classified as essential workers.

Masks and distancing will still be required inside Blanchard's vessels, though not on deck as long as people keep a six-foot distance. They won't be required when kayaking within each travel party's bubble or hiking, as long as distance is kept.

Eighty-five percent of UnCruise passengers stuck with the line after 2020 sailings were canceled and applied their future cruise credits to 2021. So Blanchard is expecting a decent season though he said there hasn't been a 'liftoff' during the wave sales period.

Some customers are moving bookings to later in the year to allow for time to get vaccinated and some are switching to 2022.

All told, Blanchard expects to carry about 5,000 passengers — down from 6,000 in a regular season due to the later start and from 7,000 in peak years.

For any passenger whose big-ship Alaska cruise is canceled, UnCruise is offering a $500 per cabin bonus savings along with the company's current $600 discount. Proof of a canceled big-ship booking is required.