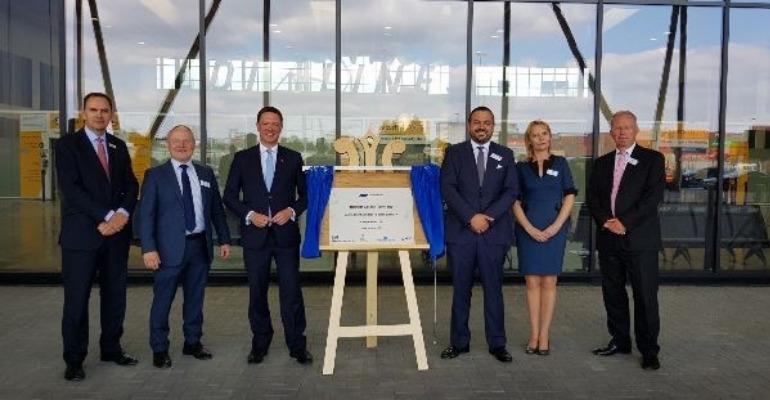 MSC Cruises’ MD Antonio Paradiso and Regent Seven Seas Cruises’ SVP and MD EMEA Graham Sadler were among those who gathered at the Port of Southampton on September 15 for the official opening of the Horizon Cruise Terminal, alongside the port’s regional director, Alastair Welch, with tours of the building held for attendees.

UK Government Minister for Aviation, Maritime & Security Robert Courts formally named the £55m building with the unveiling of its plaque, stating, ‘As we look towards a brighter and greener future for the cruise sector, we need to ensure that the infrastructure is in place to support the shift to cleaner ships.

‘The Horizon Terminal shows how this can be done. Such innovation will help the sector to build back greener and reduce emissions by providing state-of-the-art green shore power connectivity for cruises here in the UK.’

The terminal features shore power connection, enabling some cruise ships to ‘plug in’ while alongside.

Its shore power is expected to be commissioned later this year.

A show of strength and resilience

His comments were followed by those of Eamonn Ferrin, VP international business, Norwegian Cruise Line, who remarked, ‘We are thrilled to celebrate the return to cruising with such a magnificent opening, which is a testament to the strength and resilience of our industry and Norwegian Cruise Line Holdings’ long-standing partnership with the Port of Southampton.

‘Today marks a significant milestone for the cruise industry in the UK; congratulations again to Associated British Ports …’

Looking to double number of passengers

Horizon Cruise Terminal accepted its first passengers July 3, with the arrival of MSC Cruises’ MSC Virtuosa and has since welcomed over 75,000 passengers. Paradiso said, ‘MSC Cruises is looking forward to bringing even more passengers to Southampton in the years ahead … We are really proud to invest further in the UK cruise sector with a summer home for our ships in Southampton, which will benefit the British economy.’

ABP was awarded an £8m grant for Horizon from the UK government’s Getting Building Fund – organised through the Solent Local Enterprise Partnership – and was named by Anna Chojnacka Liberska, who also attended today's ceremony.

It is Southampton port’s fifth cruise terminal; the port anticipates doubling its passenger numbers to four million per year over the next 30 years.

‘We are incredibly pleased to be officially opening Horizon Cruise Terminal and showing a number of our cruise industry and city partners around the building,’ concluded Welch, ‘This investment represents a huge vote of confidence in the future of the cruise industry and as the return of cruise continues to gather pace, we are proud of the role Horizon will play in support of this key industry now and in the future.’

Courts met with Cruise Lines International Association UK & Ireland on the same day in Southampton as part of ongoing collaboration between the UK government and the cruise industry.

CLIA outlined the success of the sector’s phased resumption to date, including the UK domestic cruise season, with thousands of British passengers cruising since the spring.

‘The success of this summer’s round-Britain cruises is a testament to the commitment shown by so many people working within cruise but also in ports, local authorities, health bodies and government.

‘We look forward to maintaining this collaborative approach as the industry steps up its operations internationally.’