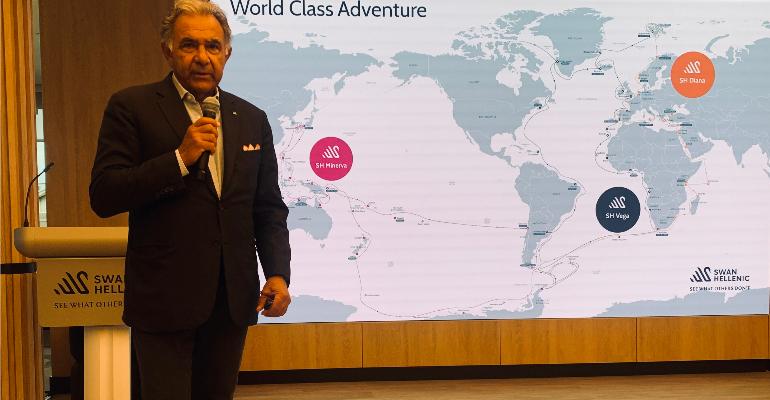 Challenges resulting from COVID-19 plus the war in Ukraine mean Swan Hellenic’s Andrea Zito has needed to ‘reroute itineraries 10 times in the last 12 months’ with ‘quite some congestion’ in Svalbard expected as a result of the latter.

The CEO shared the information from onboard new expedition ship SH Vega last week, before its naming day cruise from Helsinki to Copenhagen carrying media and trade.

2023 itineraries for SH Vega, SH Minerva, as well as SH Diana — currently under construction at Helsinki Shipyard — will go on sale by the end of the month, while 2024 bookings are to open in early September.

‘I’m not complaining. We can live with it — other people are dying,’ began Zito in reference to Ukraine, ‘but we are missing huge portions of some of the most interesting parts of the Arctic: the Kuril Islands, Kamchatka, Wrangel Island and the Chukotka Peninsula. This is still off limits for us. And we are missing Franz Josef Land, closest to the North Pole, home to the biggest colonies of polar bears.’

As a result, ‘This summer we are all concentrating on Svalbard [so] there will be quite some congestion.’

In other stretches of the globe, once dependable tour operators have ceased to exist — ‘even in Europe, not just in remote areas’ — owing to the pandemic. ‘The situation has changed in a lot of places so we need to revisit these,' Zito said. 'Because of the disruption caused by the pandemic to tourism and travel, a lot of reputable tour operators have gone out of business.’

Off the beaten track

This has led Zito to seek more remote destinations, including Rabaul, an island on the north of Papua New Guinea which is 3.5 hours' flight from Brisbane, Australia from where Swan will pick up passengers by charter plane.

In Africa where the situation in some coastal areas is fragile, Swan Hellenic is limited where it can venture: ‘Pirates are very challenging for small ships like ours. For the safety of people onboard we will have armed guards close to Somalia and close to the Gulf of Guinea, near Nigeria,' Zito said.

Africa’s west coast is also ‘challenging’ owing to swells that prevent safe shore landings. ‘We cannot land on the beach because there can be two metres of swell. You need to find the mouth of rivers or lagoons where you can enter safely,' he explained.

Next month, Swan Hellenic plans to unveil an ‘interesting joint venture’ relating to entertainment for passengers on sea days. No more than two sea days can be observed across its itineraries, which occur while sailing Papeete, Tahiti in French Polynesia to Easter Island in Chile, Papeete to Valparaíso in Chile and Ushuaia in Argentina to Cape Town in South Africa.

‘We are a cultural expedition cruise line,’ Zito asserted. ‘We are not just [operating in the] Arctic and Antarctic; there’s an awful lot of things in between those places.'

But long stretches of sea days aren't ideal because of the Swan Hellenic ship size.

'The ship is comfortable and offers plenty of space, but it is 120 metres long so we can’t offer 20 restaurants and Broadway shows,' Zito said. ‘The entertainment is our lectures … our expedition team and the wonders of our planet.’

There are four pillars to Swan Hellenic’s lecture programme. Two are connected with natural science and cover volcanoes, geology, glaciers and meteorology, the third ‘sapiens’ pillar covers archaeology, past civilisations and heritage; anthropology of remote cultures serves as the fourth pillar.

A new pillar based on modern history and geopolitics is being drawn up.

SH Minerva, which Swan Hellenic aims to take possession of from the Irish government later in the year, is planned to circumnavigate Antarctica before moving from the Bellingshausen Sea in order to sail along Lambert Glacier – the longest of its kind in the world — for several days.

The ship will then move to New Zealand where passengers will observe Māori culture before heading to New Caledonia, the Solomon Islands followed by Papua New Guinea. Said Zito, ‘With this ship we can go to places that are normally unreachable, as they are without infrastructure. You can land in the mouths of rivers, you can do Papua New Guinea and immediately afterwards, the Raja Ampat Archipelago [Indonesia] which has the most pristine islands.’

SH Minerva then sets course for Japan where it will sail through July and August, but ‘we will not bring you to the well-known Japan,’ Zito said. 'We touch big cities only for turnarounds and for passengers’ flights, but then we will go to very small islands and villages.

‘Japan is one of the most developed countries, but some islands are still in the Middle Ages. They barely have electricity, and people fish there as they have done for thousands of years.’

The ship sails on to Borneo, then to Bali and Komodo in Indonesia before heading to the Kimberley in Australia where it will operate for two months, enabling passengers to learn about Aboriginal heritage and rock art.

The Pacific islands are next, to experience the Melanesian cultures of Papua New Guinea, the Solomon Islands and Polynesia.

A ‘fascinating’ cruise from Papeete to Easter Island follows, involving a call at Pitcairn where everyone is descended from the Bounty's mutineers.

In November, the vessel heads once again to Antarctica for ‘a challenging and interesting cruise, not for Antarctica beginners, but Antarctica lovers,’ according to Zito. It will consist of 30 days’ circumnavigation from Ushuaia that will ‘go deep' into the Ross Sea to the McMurdo Station, and follow in the footsteps of explorers Roald Amundsen and Robert Scott.

‘It's really Antarctica in depth,’ remarked Zito, to mark the 110th anniversary of the race for the South Pole in 2023.

SH Vega starts in the Arctic before setting course for Antarctica. At the end of the Antarctica season, the new expedition ship will move to Cape Town. ‘This is quite a challenging cruise as unfortunately it has a lot of days at sea,’ conceded Zito. A special programme for those sea days will be announced soon.

The 10,600gt ship will sail along Africa's west coast to the Skeleton Coast and Walvis Bay, Namibia before venturing to less frequented spots. Added Zito, ‘We have been scouting [destinations] extensively for the last year. There are areas where nobody goes, for instance, a 1,000km stretch between Congo and Gabon where there are natural parks that are difficult to access.

‘There is the Loango National Park [in Gabon] where there are elephants running on the beach and hippopotamus; we can go there in safety because we have found two or three places where the ship can safely land with Zodiacs.

‘Loango has the last 12 families of lowland gorillas … and two of these families are used to humans so passengers can get closer to them.’

Togo and Benin are next, before the ship visits the British Atlantic islands followed by a season in the Arctic. SH Vega will explore the Canadian Arctic then head south to Halifax, and continue along the east coast of the Americas to Ushuaia.

Zito hopes Brazil will reopen Fernando de Noronha, which he compared to the Galápagos. It has been closed for 10 years to passenger vessels. But he cited a 'very interesting spot instead,' the Abrolhos Archipelago with its coral reefs and marine life.

With newbuild SH Diana, Swan Hellenic goes back to its roots by taking passengers to the Eastern Mediterranean. After launching in February, the ship will head to the Cyclades, Greece where passengers will see the recently opened portico of Philip V which dates to 1000 BC, followed by five Greek temples located on Sicily — Siracusa, Agrigento and Selinunte among them.

In Taormina, passengers will encounter an ancient Greek theatre where operas are still staged, and Zito promised some exclusive surprises there.

The ship will sail the Arctic after that, before continuing to Africa's Algeria, where ancient Roman archaeological sites can be seen.

SH Vega then voyages to Spitsbergen in Svalbard before returning to the East and West Mediterranean when the season ends. After that it will reposition to the Red Sea, where Zito touted 'probably the best coral in the world in terms of their colour.’

The ship turns around at Port Victoria, Seychelles before making course for Aldabra, where the largest colony of giant tortoises on Earth can be found.

From there, SH Diana traverses Kenya, Zanzibar in Tanzania, plus the old Arabic city Lamu, off Kenya, that is home to unique architecture.

Before heading back to Antarctica, the ship will sail to Madagascar, South Africa and Mozambique; overnight stays are possible in the latter two locations, allowing passengers to join evening excursions in their national parks.