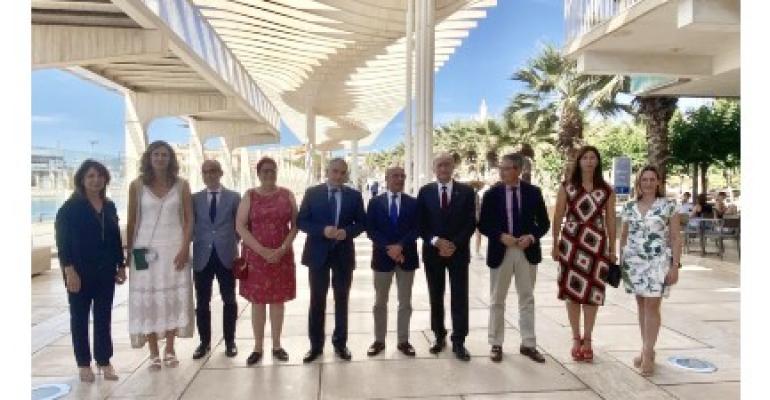 Seatrade Cruise Med, taking place in Málaga September 14-15, and cruising as a business driver, have the full support of the port, the city, local government, local and regional tourism authorities and the community at large, officials said today.

The cohesive partnership among all stakeholders was in sharp focus with a joint announcement to local journalists and TV broadcasters of the two-day Seatrade B2B event, as well as the parallel first edition of a weeklong Málaga Cruise Days.

Port Authority President Carlos Rubio said: 'The city centre Palm Grove and Muelle Uno areas (where luxury and smaller cruise ships berth) will simulate the deck of a cruise ship, hosting concerts, exhibitions, food and drinks and other activities typical of life onboard, that citizens and visitors will be able to enjoy in a unique space close to the sea.’

Alongside, Seatrade Cruise Med expects more than 3,000 attendees and over 150 exhibitors at the Palacio de Ferias y Congresos de Málaga.

Noted Seatrade Cruise Group Porfolio Director Mary Bond, ‘After a lengthy period of pivoting and readapting — and thanks to continued collaboration with our hosts and supporters — we’re excited to bring the cruise community from the Mediterranean and from further afield together in Málaga under the theme "Steering change together”.’

Málaga Mayo Francisco de la Torre said: ‘Málaga cannot be understood without its port, a strategic enclave and symbol that has always been linked to the city's prosperity. Seatrade Cruise Med will make us an international showcase for the sector and help to consolidate Malaga on the international map of cruise tourism in a key year in which we began to recover the volume of calls prior to the pandemic.’

Diputación de Málaga President Francisco Salado spoke of Seatrade Cruise Med as 'an event that will help us to delve into market trends and technological advances, and that will undoubtedly offer us opportunities for collaboration to forge new connections.’

General Secretary for Tourism of the Junta de Andalucía, Manuel Muñoz, pointed out that, ‘After two hard years due to the pandemic, the cruise sector faces the future with optimism and is confident that the event will be a success that will boost the segment in the community and will allow Andalusia to surpass historical records in cruise passengers.'