Terminals are 'paramount,' and Miami's is 'most important': Vago 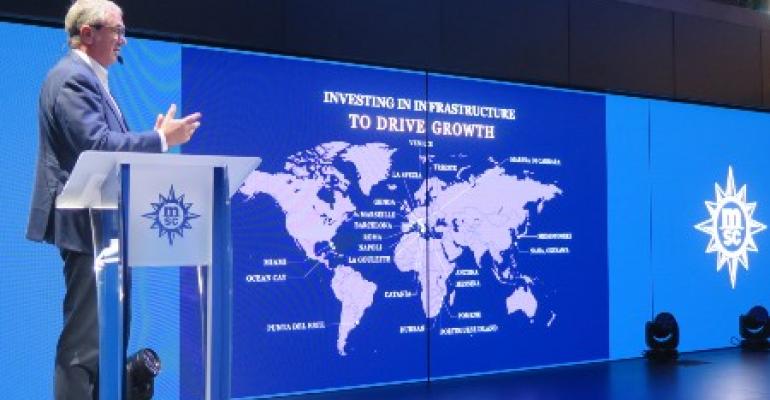 In line with its aggressive newbuilding program, MSC Cruises is strategically investing in terminals to support its global expansion.

'Terminals are paramount. That's where the experience starts,' Executive Chairman Pierfrancesco Vago said during a briefing aboard the newly inaugurated MSC Seashore.

On the cargo side, the MSC Group is the world's fifth largest terminal operator, according to Vago, which gives it the ability to keep its containers moving — something that's become a critical advantage during the global supply chain crisis.

On the cruise side, MSC is increasingly involved in terminal operations, sometimes partnering with other lines. It's got 15 terminals in Italy. It's not MSC-operated, but the Port of Southampton's new Horizon Cruise Terminal, shared with Norwegian Cruise Line Holdings, officially opened in September. And this year MSC won a concession to build and operate a new terminal at the Port of Barcelona that's set to open in 2024.

Dec. 5 will see the inauguration of the new Durban Cruise Terminal, built and to be managed by an MSC-led consortium.

And, 'the most important, the most exciting one,' Vago said, is MSC's new double-size PortMiami terminal, which he called 'an incredible landmark building.' Groundbreaking for the $450m facility is set for Dec. 13.

(Discussions continue between PortMiami and Royal Caribbean Group about sharing the terminal and a new Berth 10, to be built by the port.)

'We're investing a lot in North America,' added Gianni Onorato, CEO, MSC Cruises. Besides the terminal and sending some of its latest ships, MSC is growing its organization and spending much more on marketing.

'We can contribute to the US economy [by bringing] passengers from Europe and South America,' he said.

Adding homeports — as the line has just done by branching out to Port Canaveral — and offering shorter cruises in the mix so more people can try the brand, are key, according to MSC Cruises USA President Rubén Rodríguez.

As earlier reported, MSC Seascape, the sister of just-inaugurated MSC Seashore, will be deployed from PortMiami during its winter 2022/23 inaugural season.