For a town like Skagway, cruise ships are a matter of survival 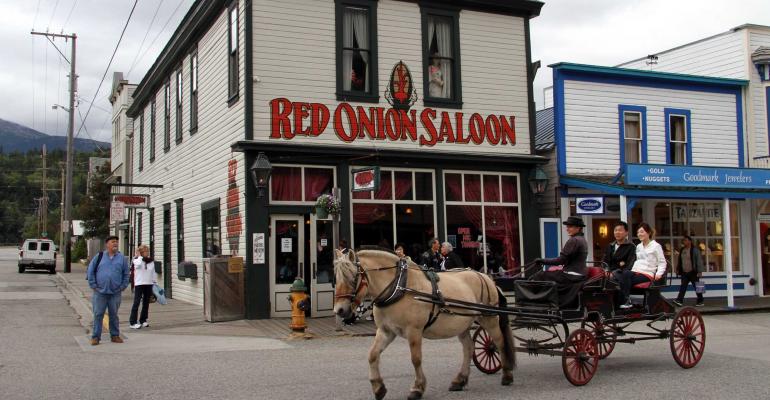 Skagway is a major cruise destination but a one-horse town in the sense of being small and relying on cruise revenues. Two seasons without ships could be a catastrophe
Skagway, Alaska, makes a poignant example of what cruising's shutdown for a second season means.

It's a fight for survival, and 'catacylsmic' is a good word to sum up 30 months without having a cruise ship, Mayor Andrew Cremata told Seatrade Cruise News.

Months ago, Cremata was concerned about the US Centers for Disease Control and Prevention's 'nebulous' conditional sail order and now Canada's year-long cruise ban has made it a near-certainty there will be no big ships in Alaska during 2021.

He's hoping Skagway can entice enough land and regional visitors to 'survive for 2021 and hope for 2022.' American Cruise Lines and Alaskan Dream Cruises visit, and Cremata's talking with other US-flag companies.

He explained that while smaller operators like UnCruise Adventures used to visit, they moved away as the big ships rolled in, making days when there could be 15,000 to 16,000 people in town, counting crew.

'If you're UnCruise, marketing a remote, wilderness experience, this wasn't their market,' Cremata said. However, this will be a year when that's just what it will be like, so perhaps it will be possible to pick up more small ships.

Skagway will be a safe destination, he added, since he expects that after March, everyone in town will be vaccinated. The Biden administration's mask mandate for transportation will apply to the port, and the community will be discussing extending that policy in town to be consistent with what the ships require. When visitors hit the trails and get outside of town, masks won't be needed.

Skagway has also made the preparations for a testing facility and identified quarantine rooms.

Not banking on PVSA exemption but desperately seeking stimulus funding

Cremata is in touch with lawmakers mounting an effort for a Passenger Vessel Services Act exemption and applauds the leadership of Alaska Rep. Don Young, however he's not very hopeful this will come about.

In any case, without the CDC moving faster on getting cruise ships back into operation, a PVSA exemption amounts to nothing.

'I look at all these balls in the air and I'm not being pessimistic, but realistic,' Cremata said, in expressing serious doubt about big foreign-flag ships in Skagway this summer.

What the mayor is most focused on is pressing federal lawmakers to support President Biden's full federal stimulus package, including assistance to municipalities, so jobs don't go away. Cremata's also advocating for special consideration for port communities that rely on tourism.

'We totally support our cruise partners,' he added. 'We appreciate their plight and we are inexorably linked. They understand what this means to us.'

A second year of no cruise ships is a 'catastrophe for Alaska, for our port communities, for the businesses that rely on summer visitors and for all of people who work in the industry,' according to Steve Hites of Skagway Street Car Company, Inc. 'The effects have already hit the economy, with the complete loss of our 2020 season. Many Alaska companies have gone 15 months without any revenue. Now they are staring at another 15 months before the very first ship in April 2022, and then another month beyond that to start getting payments for services.'

Hites doesn't know 'how the little guys are going to make it. The small mom and pop companies are what makes Alaska special. Some of them have been around a long time, some are the dream come true of young people who are new to the industry but are ready to work hard and put their life savings into an idea. What happens to them? The survivors will be the large entities that can weather a tsunami, and they are usually global: You can find them in any big cruise port.'

Hites pointed to examples like the cafe that was built based on cruise traffic. The owners can't make it in a town with only a thousand year-round residents.

'The summers got them through the winters. Now there will have been no summer for two years,' he said.

'No other industry hit as hard'

'No other industry in the nation has been hit as hard as the small businesses in this sector,' according to Hites. 'Cruise industry vendors and suppliers, and companies that catered primarily to the cruise guests, have been completely shut down. They have zero business. There should be some kind of special disaster assistance for these Alaska businesses so affected by an action of the US government — the loss of all of their customers by bureaucratic order — so they have at least a chance of being around in 2022.'

There's a lot of talk about the pent-up demand for travel, and the potential for 1.5m to 1.7m people cruising to Alaska in 2022. 'What will they find when they arrive 15 months from now? Who will be left to welcome them?' Hites said.

'Our brave community leadership is trying to rally support to have businesses ready for the summer 2021 arrival of the small Alaska ferries and of our nine-passenger scheduled air carrier bringing in visitors,' he continued, plus several small-ship cruise companies will sail in Southeast Alaska.

Hites' dire forecast: 'Little port towns like Skagway will be ghost towns without a miracle.'