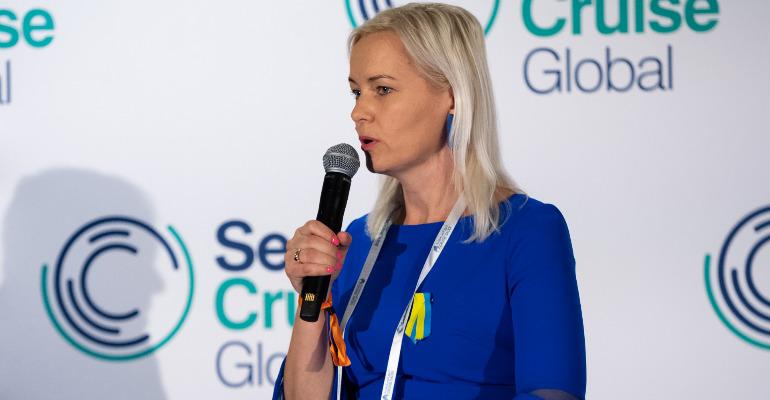 'If we don’t have cruise lines for a long time, it will be difficult to get them back,' says Tallinn port's Sirle Arro

Sirle Arro, the Port of Tallinn’s head of marketing and communications, is appealing to cruise lines to continue calling in the Baltics, stating the region is safe in spite of its ‘big neighbour from the eastern side: Russia.’

‘There are losers and winners and I'm sorry to say in our case, in Tallinn, Stockholm and Helsinki, we’ve lost cruise calls because of the war and lines have taken away some ships from our region.

'Cruise lines are responsbible and are not calling in Russia ... We feel safe, we are monitoring the news constantly and supporting the Ukrainian people. We are part of really powerful alliances: the European Union, NATO, so I think this gives us safety and security.

‘Travelling is safe to our region, we are really keen to service our cruise guests. I think our guides need to keep up their competencies and our bus companies need to invest. If we don’t have cruise lines for a long time, it will be difficult to get them back.’

Around the world updates

This prompted Travelyields’ MD David Selby to declare: ‘The message is go back to the Baltic because it has so much to offer.’

In spite of its proximity to Russia, Gotland has experienced its ‘best ever year’ in terms of cruise calls while most German cruise lines have remained ‘loyal to our region,’ albeit avoiding calls along the Baltic's eastern shores.

The statements came during the ‘Around the World: Global Destination Updates’ conference session at Seatrade Cruise Global held in Miami this week.

In the Mediterranean, the forecast is 1,800 calls this year, the same figure as in 2019 which according to Mar Perez, head of cruise at the Port of Barcelona, means it is ‘in the path of the total recovery of cruise traffic.’ The 2020 season saw almost two-million passengers in the Med - ‘we reached that figure in in such a difficult year, so we have to be optimistic,’ she added.

She highlighted the need for uniformity of protocols across the region before commending MedCruise – the association representing ports in the Med and its adjoining seas – for its efforts: ‘MedCruise has been very, very important for us - a collaboration in order to achieve best practices.’

Ioannis Bras, founder and CEO of Five Senses Consulting & Development, interviewing the head of cruise, noted, ‘This year is going to be a great, great year for the Med. In Greece, it’s higher this year than in 2019 in terms of cruise calls and looking really good at the moment.’

‘Our region is probably the most exciting to come to right now… the number of infrastructure projects for cruise ships at the moment is just immense,’ said Barbara Buczek, executive director, Cruise Saudi. She commended Qatar, Abu Dhabi and Dubai – visited in conjuction with Saudi Arabia as part of Arabian Gulf itineraries – for their efforts in attracting cruise lines: 'We are collectively putting together a product,’ said the executive director.

Last season, it developed three ports – Jeddah, Yanbu and Dammam – and is now working with the country's ministry of tourism to increase the number of tour guides and with the Culinary Arts Commission to bring authentic Saudi cuisine to cruise passengers.

‘It’s surprising the number of Saudi Arabians who want to cruise,’ she added and said the local community are ‘so excited about cruises.’

‘We had an opportunity to re-check what’s important to us: sustainability and the environment,’ said Joseph Boschulte, commissioner for the U.S. Virgin Islands Department of Tourism of the pandemic. On the subject of reopening in June 2020, he stated, ‘we’re seeing the value of those ships coming back. There are better days ahead, while speaking about the Caribbean region more widely, he remarked, ‘We always unite in times of natural disaster - we need the Caribbean to unite around the cruise business and get the best itineraries.’

Rene Trepanier, executive director, Cruise the Saint-Lawrence, discussed Canada, New England and St Lawrence, which belong to the Canada New England Alliance. ‘We’re working hard on our sustainability plan – a plan that comprises five major orientations, 21 goals and 35 projects – and these are taken by the destination themselves.’

He went on to highlighted the Port of Québec’s new cruise terminal, which is located at Berth 30.

‘We have very dynamic islands, it’s been a well kept secret, but there’s a lot of people interested on our islands right now,’ said Bud Gilroy, president of Tahiti Cruise Club and the new chairman of South Pacific Cruise Alliance. ‘Tahiti was closed for three months, it opened up pretty quickly because of testing put in place - Windstar Cruises’ Wind Spirit and Star Breeze sail year-round there.

Gilroy explained that the alliance endeavours to discover a new destination or 'the little jewel everyone is looking for,’ for instance, in French Polynesia comprising 118 islands.

On what else the destination has to offer, he asserted, ‘We’re not very worried about the future. Once they [cruise ships] come down, they’ll be convinced.’

Seatrade Cruise Global is set for April 25-28 at the Miami Beach Convention Center. The full conference program is detailed here.