Vancouver embraces 'one of the coolest' cruise ships, Ocean Victory 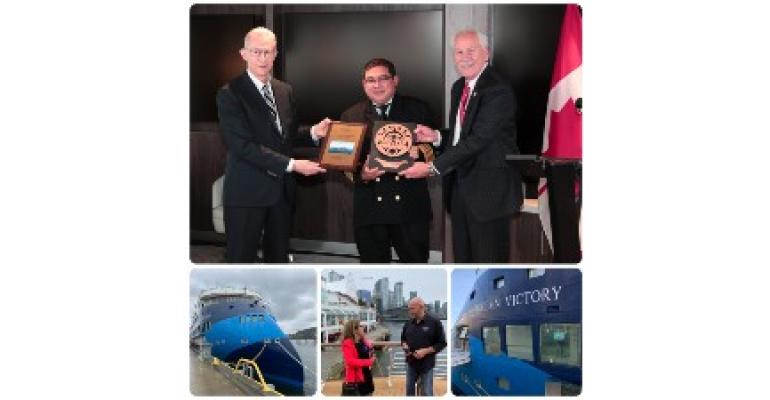 Bordered by snowcapped mountains and Vancouver's glittering skyline, the new Ocean Victory was in position to embark on its inaugural Alaska expedition cruise for American Queen Voyages.

'What a backdrop!' AQV Founder and Chairman John Waggoner enthused as seaplanes took off, a fireboat spewed plumes of water and Ocean Victory, with its eye-catching X-BOW, nuzzled beneath the white sails of Canada Place where officials bestowed greetings and gifts Friday evening.

'The greatest backdrop in the world'

'We wanted to make sure this ship had the best of everything, the best expedition team and the greatest backdrop in the world: British Columbia and Alaska,' Waggoner said.

Rosalind Campbell, councillor of the Musqueam Indian Band, welcomed Ocean Victory, its crew and passengers to her people's ancestral lands and was the first of several speakers who said they'd never cruised but were tempted by this distinctive vessel.

'One of the coolest' cruise ships

Kathy deLisser, regional VP Canada, Ceres Terminals Canada, noted there had been an 891-day pandemic pause between the last cruise call and this spring's resumption. In 2022, Vancouver has 307 calls booked by 37 cruise ships 'and this is one of the coolest,' deLisser said, adding: 'This vessel fits so well with this market.'

'This ship represents the latest and greatest in sustainability,' according to Carmen Ortega, trade development manager, Vancouver Fraser Port Authority, who singled out Ocean Victory's use of cleaner fuel and its X-BOW that reduces underwater noise.

For some years the port authority's Enhancing Cetacean Habitat and Observation (ECHO) Program has encouraged ships to voluntarily slow down to reduce underwater noise in key feeding areas for southern resident killer whales. Underwater noise from ships can interfere with whales’ ability to hunt, navigate and communicate.

As part Ocean Victory's expedition experience, Dr. Michelle Fournet, director of the Sound Science Research Collective and a leading expert in whale communications, is bringing her research lab onboard. She designed a program that takes hydrophones on Zodiacs so passengers can listen to the whales around them, and they'll also get to participate in citizen science projects.

'We would love to connect the work you're doing with our team.' Tom Corsie, VP real estate, Vancouver Fraser Port Authority, told Waggoner, adding that 2022 is bringing 'so much innovation from the cruise industry.'

Vancouver's vision is to be the world's most sustainable port, Corsie said. It has offered shore power for 13 years and this season, 62% of cruise calls are shore-powered-enabled. Ortega noted the port is looking at mobile cable management systems to facilitate hookups for additional ships and at providing LNG bunkering. 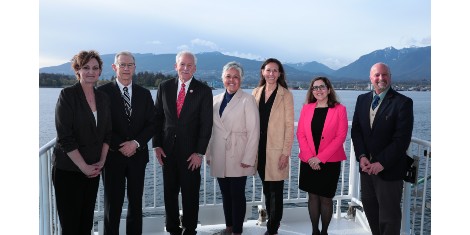 'We are so excited that cruise is back in our city,' said Karen Soyka, VP strategy & business development, Destination Vancouver. 'Cruising is is critically important for our economy.' Soyka is also pleased that Ocean Victory overnights at Vancouver for its turnarounds. 'It feels like the ship is designed for deeper exploration,' she said.

A vessel for learning

And Dean Wendt, dean of the College of Science and Mathematics, California Polytechnic State University, John Waggoner's alma mater, called Ocean Victory 'a vessel for learning, an extension of the classroom, not only for guests but for students at Cal Poly,' who are aboard as part of Ocean Victory's expedition team.

'This is a learn by doing vessel, the ethos of Ocean Victory,' Wendt said.

The 186-passenger ship will operate 12- and 13-day journeys between Vancouver and Sitka through the less-traveled regions of the Inside Passage on an itinerary curated by David Giersdorf, whose family pioneered Alaska expedition cruising decades ago.