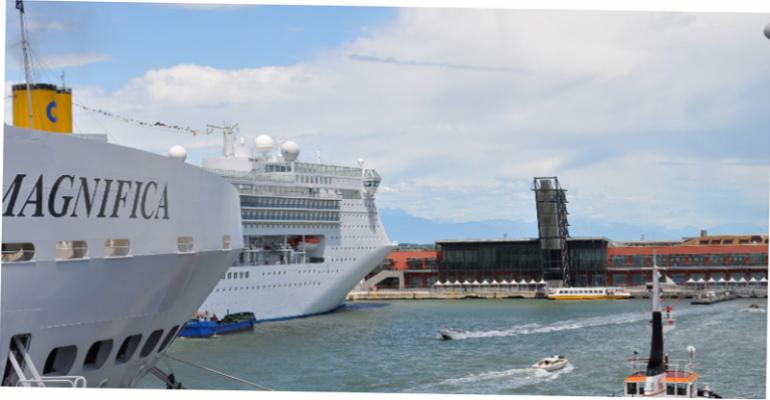 Guidelines contained in the ministerial decree revokes the possibility of using the Marittima passenger terminal - a VTP concession until 2025.

Venezia Terminal Passeggeri (VTP) has spoken out against the Italian government’s decree which prohibits most cruise ships from entering the Venetian Lagoon.

‘The ministerial decree is significant as, in fact, it excludes even the smallest ships, such as those in the luxury, high-end tourism sector,’ said Fabrizio Spagna, president, VTP. ‘Their high spending potential will no longer be able to reach the Marittima from August 1.’

The ministerial decree approved July 14 by the Council of Ministers revokes the possibility of using the Marittima passenger terminal, a VTP concession until 2025.

Given these limits, Spagna argued that few ships will be able to access the terminal, impacting the concession and violating national and EU regulations that protect it.

‘In the last nine years, VTP … has collaborated with successive governments and continues to do so with the current government, to move ships from Canale della Giudecca by presenting concrete projects and…studying solutions far beyond what a concessionaire should compete with,’ Spagna added.

‘On the other hand, there are the requests and expectations of VTP shareholders and all the stakeholders involved — direct and indirect workers as well as the entire chain of companies connected to cruise, of which there are about 200 from the Veneto region — which see a decline in their rights and uncertainties for their future.’

He went on to say, ‘We hope that the government will take into consideration these requests, carefully evaluating proposals already made such as the Vittorio Emanuele which would allow the Marittima passenger terminal to keep functioning… without inevitably destining it to closure.’

In October 2019, VTP put forward a project for investment of just over €30m for maintenance interventions at the Vittorio Emanuele III Channel in line with the Port Regulatory Plan. The project, Spagna stated, had a high environmental and sustainability value, and ‘provided for the enhancement of the Marittima on which €160m of public and private funds were invested.’

‘Proposals have not been heard’

A spokesperson for VTP lamented, ‘This decision effectively cancels with a stroke of the pen one of the most popular cruise ports in the world in terms of service level, postponing the shift of cruise activities to Marghera to an unspecified time.

‘It is very difficult for cruise companies, once they have moved their ships to other national or foreign ports, to relocate them back to Venice, so it is urgent that clarity will be given on the path that will lead to the move to Maghera.

‘VTP has been studying the feasibility for some time and has already filed concrete proposals that have not been heard.’

On the docks planned in the short-term at Marghera, ‘We already know for sure that the American cruise lines, in particular Royal Caribbean Cruise Line and Norwegian Cruise Line, have communicated their opposition to placing ships in Marghera in the absence of minimum safety conditions,’ said Galliano Di Marco, general manager, Venezia Terminal Passeggeri.

‘To these we must add the luxury ships that for obvious reasons have never given their willingness to move to Marghera, for example Viking, Azamara, Silversea, Ritz-Carlton, just to name a few.

‘All this will entail a thorough review of the company's business plan in light of the new decree, which will be presented to the government as soon as possible together with the one recently approved by the company's board of directors.

‘We could do this as soon as it is known which and how many docks will be available in Marghera.’

Di Marco concluded, ‘The market does not wait. To date the discussions with the companies are assiduous, but it is not yet known what itinerary changes they will make and whether or not they will accept Marghera.

‘As reported in article 2 of the decree, it will be necessary not only to arrange the docks, but also the Canale dei Petroli to allow cruise ships to pass safely. In fact, as highlighted in the various simulation campaigns conducted by VTP, the Port Authority of Venice and four major cruise companies, maintenance interventions are required on the aforementioned channel in line with the current Port Master Plan.’

Indemnities are anticipated, as well as protection for workers and those involved in the supply chain.