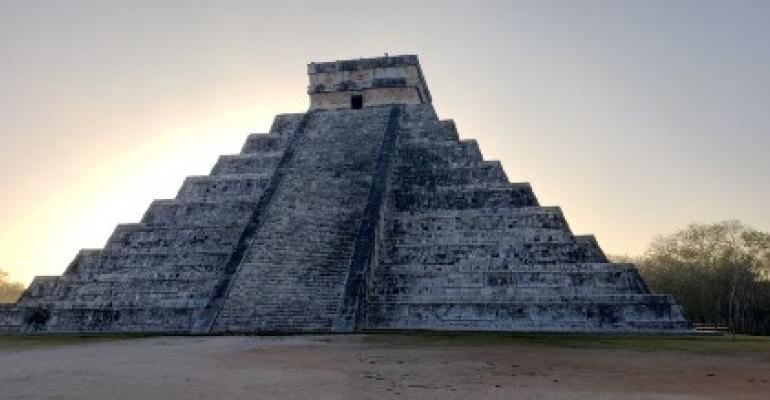 Travelers on the Yucatán program will overnight in the Mayaland Hotel at Chichén Itzá, where they can attend a sound and light show after dark then watch the sunrise over the Temple of Kukulkán the next morning
Well-known on the Great Lakes, Victory Cruise Lines is expanding its cultural immersion journeys southward.

Starting in January 2022 on 'Mexico and the Yucatán Peninsula' 11-day cruise and land tours, travelers can experience Chichén Itzá in a sound and light show after dark and at sunrise, swim in a cenote, explore places like the fortress city of Campeche, a UNESCO World Heritage Site, and sample authentic Mexican food and tequilas. Tours at each port are included.

'We're very excited about the rich history and culture. It's an amazing experience,' said Victory Chairman John Waggoner, who likened the trip to a cruise and land safari. Thanks to its shallow draft, the 202-passenger Victory I can go alongside at Campeche and Progreso where, at the latter, it will tie up right on the mainland instead of at the end of the long pier where the big ships dock and shuttle passengers to shore.

Waggoner expects the Yucatán program to be popular with groups like Road Scholar, which specializes in educational travel for the 50-plus market, and with South American tour operators. He expects 60% of customers will be Victory/AQSC veterans, with the rest new to the brand.

'Deep dive into the culture'

'This kind of itinerary I know will appeal,' said Dave Porter, co-owner of The Roaming Boomers, a Virtuoso agency based in Scottsdale, Arizona, that specializes in the boomer market and small ships. 'It gives folks the opportunity to visit places they wouldn't get to visit and provides a deep dive into the culture of that region.'

As an alternative to the usual seven-day Caribbean cruise, 'This 11-day Yucatán is the perfect number of days to get away,' Porter said, since clients who've been 'cooped up for so long just want to get out.' And if they're flying to embark a cruise, they like to spend a more time at the destination.

'This kind of itinerary takes you away from [the crowds] and you're better able to get into the culture,' he said. For Porter's clients, the enticement is the destination, not the ship.

The Yucatán trip is bookended by hotel overnights in Cancún, and Porter said most of his clients prefer to spend a night at the embarkation port and typically book a post-cruise hotel stay as well.

As for 'edutainment' like a tequila tasting, he's definitely on board. Porter described The Roaming Boomers' demographic as 'very inquisitive about the food and beverages and they really enjoy an opportunity to try new things.'

Following the hotel overnight in Cancún, passengers embark Victory I at Cozumel. From there they'll visit the seaside Mayan ruins of Tulum; Costa Maya; Progreso, for the colonial city of Mérida; and Campeche, a fortress city that's a UNESCO World Heritage Site and the gateway to the archaeological site of Edzná.

Passengers disembark on the return to Progreso and travel by motor coach to Valladolid where they overnight at the Mayaland hotel at Chichén Itzá. There they can attend a nighttime sound and light show then watch the sunrise over the Temple of Kukulkán the next morning before returning to Cancún. Departures are available in January, February, November and December 2022.

Victory is currently running a 'Freedom' sale that offers up to $2,000 savings per stateroom on the Yucatán cruises in January 2022 for reservations made by August 31, 2021.

Immediately following the first four Yucatán cruises are a spring 2022 series of 'Southern Coastal Charm' 12-day round-trips from Florida's Amelia Island that pair American originals like Charleston and Savannah with gems like Beaufort and Brunswick, plus an international jaunt to the Bahamas.

'Many of our clients are staying close to home this year. They're looking for something close in, easy to get to,' The Roaming Boomers' Porter said. While people could drive to these US destinations, that would mean many hours behind the wheel and multiple hotels.

'Unpack once and ride the floating hotel'

According to Porter, it's much better to go by ship: 'You unpack once and ride the floating hotel,' as he put it. Cities like Savannah are of great interest, he added. The challenge is creating awareness about the possibility of visiting on a small ship but he thinks once word gets out, this will be a very enticing itinerary.

Complement to the Great Lakes

AQSC's Waggoner is delighted to extend Victory Cruise Line's operations throughout more of the year and he sees these southern and south of the border cultural immersion cruises as a great complement to the Great Lakes season.