Wonder of the Seas to debut in US and Europe, not China 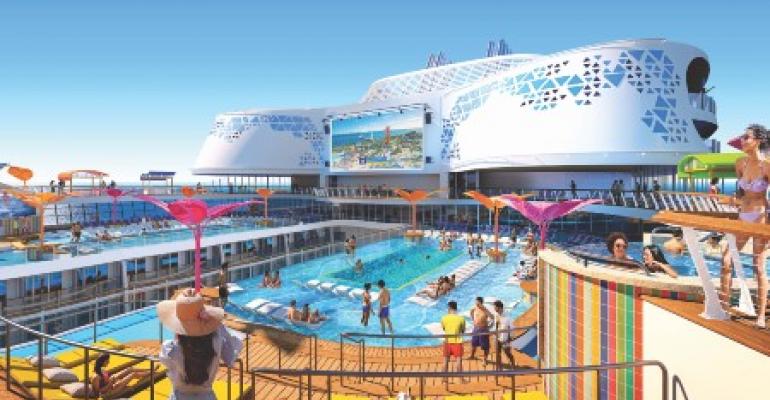 Wonder of the Seas' pool deck has a different look

Royal Caribbean International's Wonder of the Seas is going to debut in the US, then Europe in 2022.

This fifth Oasis-class ship had originally been announced for Shanghai, China.

Instead, what Royal Caribbean is calling the world’s largest cruise ship will begin sailing from its home in Fort Lauderdale to the Caribbean on March 4, 2022, before making its way to Barcelona and Civitavecchia (Rome) to kick off summer vacations in May.

'The momentum taking off across bookings and our returning ships in the US and Europe is significant,' Royal Caribbean President and CEO Michael Bayley said. 'With half of our fleet sailing again, we are encouraged by what we’re seeing. These regions are in the position to welcome a brand-new, innovative ship like Wonder of the Seas.'

Wonder will have eight neighborhoods, including the new Suite Neighborhood, a cantilevered pool bar named The Vue, and Wonder Playscape, an interactive, open-air kids’ play area with awe-inspiring views. Returning favorites include The Ultimate Abyss, the tallest slide at sea; Central Park, the neighborhood filled with real plants; and a Caribbean-inspired pool deck.

The Suite Class Neighborhood, only found on Wonder, offers Royal Suite Class guests an elevated Suite Sun Deck in a new location, complete with a plunge pool, bar and plenty of loungers and nooks to kick back. These elements join the private restaurant Coastal Kitchen and the Suite Lounge. The ship also promises the grandest Ultimate Family Suite yet, accommodating 10 people.

This new cantilevered bar provides panoramic ocean views from high above on the pool deck. After sunset, it shines brightly with a colorful mosaic canopy overhead.

The Lime & Coconut is at the center of the deck's Caribbean vibes, with two poolside bars and live music along with the trio of high-speed waterslides, The Perfect Storm, and kids aqua park Splashaway Bay. Casitas and in-pool loungers and more make for a variety of spots to relax, especially to catch a movie under the stars at the largest poolside movie screen in the Royal Caribbean fleet.

Other ship features include dedicated kids and teens spaces at Adventure Ocean, Social100 and The Patio; the FlowRider surf simulator, twin rock-climbing walls and the 10-deck-high zip line. The Boardwalk neighborhood returns with its carousel, as does Central Park with it fine dining options.

Wonder of the Seas will sail weeklong cruises to the eastern and western Caribbean from Port Everglades, calling at destinations like Cozumel, St. Maarten and San Juan, with every itinerary including Perfect Day at CocoCay.

From Barcelona and Civitavecchia on seven-night western Mediterranean cruises, travelers can visit destinations such as Palma de Mallorca and Naples.