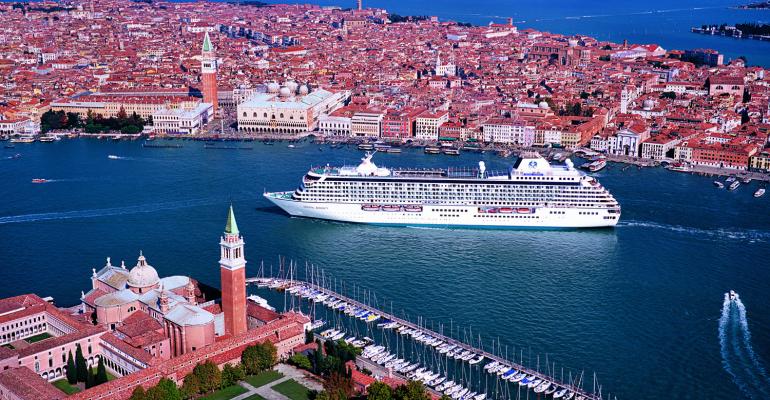 At a meeting of Italy’s Council of Ministers Wednesday, the cabinet agreed the need to provide alternative berthing in the Venice lagoon for cruise ships over 40,000gt.

The vote was held on a proposal by President Mario Draghi; Enrico Giovannini, minister of sustainable infrastructure and mobility and Cultural Minister Dario Franceschini following their call to temporarily divert large cruise ships from Venice to Marghera in a meeting on March 25.

The decision was tweeted by Franceschini, who stated it would meet a request by UNESCO.

‘A correct decision, awaited for years: the [Italian] Council of Ministers approves a decree-law that establishes that the final landing places of the big ships in Venice will have to be planned and realized outside the lagoon, as requested by UNESCO,’ Franceschini tweeted last night.

The approved decree law calls for ‘urgent provisions for the regulation of cruise traffic and container ships’ in the Lagoon.

The government said: ‘In order to reconcile the needs of protecting the artistic, cultural and environmental heritage of Venice and those related to cruise activities and freight traffic, the decree enables the Port Authority of the Northern Adriatic Sea, to call for the submission of technical and economic feasibility studies aimed at collecting proposals and projects for the construction of berthing for cruise ships of over 40,000gt.’

According to a statement released by Giovannini, the launch of ideas and solutions will occur within 60 days from the entry into force of the law decree.

Francesco Galietti, CLIA director for Italy said Thursday evening the cruise lines welcome the government decree, ‘as we have always supported plans to decongest traffic from Venice and remove large ships from the Giudecca Canal.’

Cinzia Zincone, Extraordinary Commissioner of the Northern Adriatic Sea Port Authority (AdSP MAS) said she guarantees collaboration in launching the call for technical and eco-nomic feasibility proposals and projects to create berths outside the lagoon.

'The Decree, in its practical definition, must represent an expected step towards a shared solu-tion, also with the Port Authority of Venice, the Veneto Region and the City Venice Metro, and a definitive solution of cruise ships routing in Venice.’

She added, ‘It is clear that the proposals will have to comply with stringent criteria of safety, environmental compatibility and safeguarding the essence of Venice as a cruise homeport, an essential element to give certainty to the cruise market and ensure the economic and employ-ment relevance of the sector for the city and the territory.'

Regarding temporary solutions, in the short and medium term, Zincone said ‘we are clear that these solutions cannot compromise the commercial and industrial activity in Marghera Port but must instead, as much as possible, aim at recovery - environmental, productivity and em-ployment - of areas currently in disuse.

Discussions about different routing to reach the Stazione Maritima cruise terminals have been going on for eight years.

After the Costa Concordia disaster, Italy's Clini-Passera decree banned a percentage of ships larger than 40,000gt from using the Giudecca Canal in January 2014.

This was later changed to ships larger than 96,000gt, then overturned in 2015 following an appeal by the Venice Passenger Terminal and other parties, based on a lack of waterway access alternatives.

Larger ships entering Venice have to proceed via the Malamocco-Marhera Canal and berth at Marghera industrial port with passengers and luggage transferred to Stazione Marittima by rail or road.

In December 2020, a ministerial meeting agreed on a two phase strategy to safeguard the future of Venice. The first phase regarded a temporary (short-medium term) solution with larger cruise ships berthing at commercial terminals in the Marghera port area (to be followed by a dedicated although still temporary cruise landing being prepared and to be ready for 2022), and the second phase for a structural and definitive solution centered on launching the ideas competition for an out-of-the Lagoon solution.

The plan was to first reach Marghera and from there Stazione Marritima by dredging the Contorta Sant'Angelo canal which was then switched to Vittorio Emanuele channel but as neither of the solutions got off the drawing board, large cruise ships have to berth at Marghera.

In the meantime, last February, the Port Authority of the Northern Adriatic Sea (which encompasses Venice) launched a tender for a preliminary feasibility and economical study to build a new cruise terminal in Marghera.

It is unclear if the current 96,000gt size restriction will continue to apply whilst the alternatives are being studied or if the reduction to 40,000gt applies with immediate effect.