Gammon: "The future is indeed bright and there is opportunity for everybody" - Seatrade Europe continues 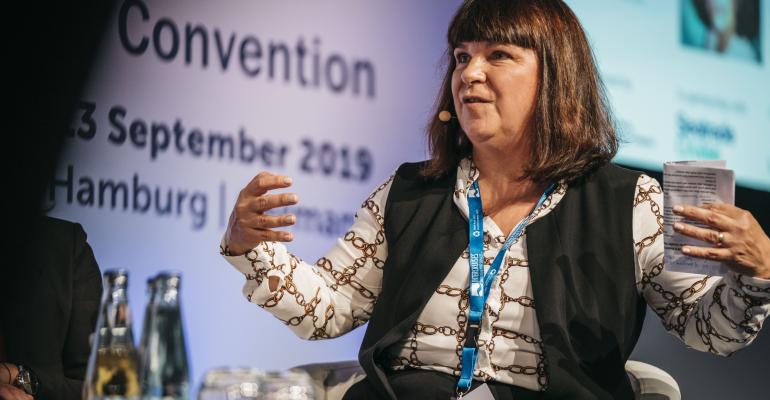 Gammon: "The future is indeed bright and there is opportunity for everybody" - Seatrade Europe continues

Together with Cruise Europe chairman Captain Michael McCarthy, she rolled out the new flag of River Cruise Europe, presenting the initiative’s logo to the industry for the first time. van der Heyden said the new initiative had been prepared under the umbrella of Cruise Europe since spring and already boasts 20 members.

The Ports of Spain also made an exciting show announcement today, presenting the venue for Seatrade Cruise Med 2020 in Málaga, Spain with a drinks reception on the showfloor and a welcome presentation from Salvador de la Encina, President, Puertos del Estado and Carlos Rubio, President, Port Authority of Málaga.

"Málaga is an important city for the cruise industry. We host more than 300 stopovers and 500,000 passengers annually and are so excited to host the 2020 edition of Seatrade Cruise Med. Málaga is excited to show everyone the beauty, state of the art facilities and the possibilities of this destination," announced Rubio.

The show continued with an interactive and captivating roundtable session which hosted representatives from the port, city and destination community. ‘How do We Create Effective Dialogue Among Cruise Lines, Ports and Cities?’, chaired by Luis De Carvalho, CEO, Bermello Ajamil & Partners Europe formed inspiring and dynamic discussions with delegates to consider how the industry can better communicate to shape the future of destination management.

De Carvalho concluded, "As growth continues on its upwards trajectory, this is still an industry continuing to face questions about destination sustainability. In short, overcrowding and sustainability in all regions is a genuine concern, including European destinations – but there are solutions. "

In addition, free conference content took place on the show floor with the ‘The Future of Expedition Cruising in Europe’ session moderated by Liz Gammon, Marketing Consultant & Industry Influencer. The session was well attended with standing room only on the Showcase Deck and addressed challenges within the sector as well as opportunities for growth within this growing sector.

Timothy Littley, Senior Director, Deployment & Itinerary Planning, Seabourn Cruise Line, explained the importance of recognising the various itinerary destinations within the sector. "Expedition cruising is not limited to the Arctic and Antarctica. It’s not just about cold climate cruising – anywhere in the world can be an expedition destination", he said.

Gammon commented on the booming expedition sector quoting the 34 expedition ships on order, which current account for almost one third of the orderbook; "the future is indeed bright and there is opportunity for everybody. "

Referring to the recent announcement of the Seatrade Expedition brand, Gammon exclaimed, "this is just the start of Seatrade’s focus on expedition cruising".