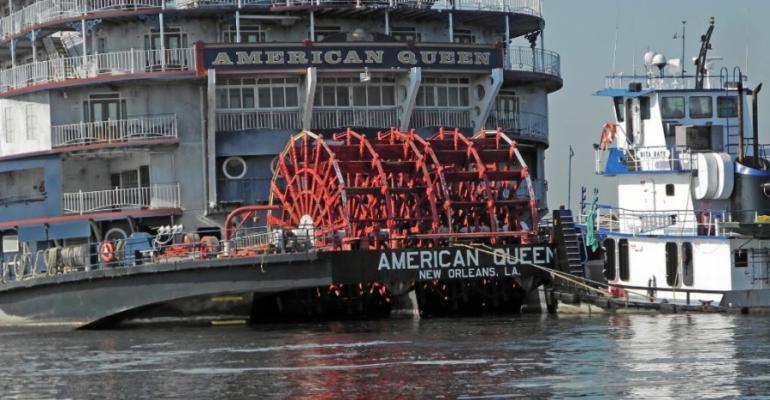 ‘Our goal is for her to emerge from the yard like new,’ said Tim Rubacky, svp of the Great American Steamboat Co.

‘This is a momentous occasion at the company, our first major milestone,’ he told Seatrade Insider. ‘It was a beautiful day.’

Capt. John Boyle, chief mate John Cook and engineer Marvin Williams were aboard the tug-assisted vessel, which had been under the care of the US Maritime Administration since late 2008 after sailing briefly for Majestic America Line.

The 418-foot American Queen, the largest paddlewheeler steamboat ever built, was acquired by HMS Global Maritime and is scheduled to begin operations for its affiliate, the Great American Steamboat Co., in April.

During an earlier interview, Great American Steamboat Co. president Christopher Kyte described the condition of the 1995-built vessel as ‘excellent,’ adding: ‘The government did a beautiful job of keeping it.’

Kyte said American Queen could be ready to sail in a matter of weeks but a drydock of several months is planned that, among other things, will add technological upgrades to improve operating efficiency.