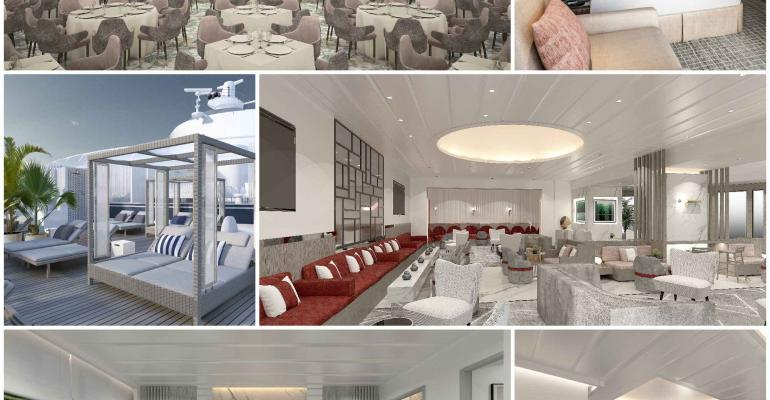 Top row: lighter look for the main restaurant, and staterooms redesigned by Hirsch Bedner Associates. Second row: The Retreat Sun Deck and The Retreat Lounge for suite guests. Bottom row: Penthouse Suite by Kelly Hoppen (click to enlarge)
Celebrity Cruises is pouring an additional $100m into its previously announced $400m 'Celebrity Revolution' fleetwide renovation and has engaged Kelly Hoppen—the mastermind behind the suites, The Retreat and the spa on Celebrity Edge—to design these features on the Millennium and Solstice ships.

'I am revolutionizing the brand, not just a few ships,' president and CEO Lisa Lutoff-Perlo said of the extensive program, which touches most aspects of the four Millennium-class ships and facets of the five Solstice-class vessels.

All will be getting changes inspired by Celebrity Edge, particularly when it comes to restyling the suites and accommodations, adding the suite-class Retreat, a spa redesign and new retail. Besides Hoppen, numerous other designers and architects are involved, including the renowned international hospitality design firm Hirsch Bedner Associates.

'We're taking our fleet to the edge,' Lutoff-Perlo said. 'Our revolution started with Celebrity Edge. It has given us a lot of inspiration about how we go back to the rest of the ships and update the modern luxury.'

One aspect of that is the color palette. 'I really wanted to lighten [the Millennium-class] ships. They're beautiful, but they were designed in the late '90s. The finishings are dark. The materials are dark. If we could lighten those, they'd be more like Solstice.'

Lutoff-Perlo said lighter, more neutral colors are timeless, and she wants the new look to stand the test of time.

'The work does vary ship to ship,' she added. 'The Millennium class is twice as old [as the Solstice class] so there's more investment and more being done with them.'

Suites and The Retreat

Hoppen is putting her distinctive style of clean lines, neutral tones and a warm, inviting opulence into the suites on the four Millennium-class ships and the newly added Reflection Suite and six Signature suites (found today on Celebrity Reflection) to the rest of the Solstice class.

As well, suite-class haven The Retreat—designed by Hoppen for Celebrity Edge—will be going fleetwide. Every ship will offer The Retreat Lounge, replacing Michael's Club. This dark, masculine room will completely transform into a light and airy, contemporary space, staffed by a concierge. All nine ships will be getting a private Retreat Sun Deck, too, located high up and forward. This chic, open-air hideaway will resemble a resort, with plush loungers, Bali beds, a whirlpool and beverage service.

All accommodations on the Millennium-class and Solstice-class ships will be transformed, courtesy of Hirsch Bedner Associates, with a fresh, chic design reminiscent of top boutique hotels.

The rooms will also be fitted with Celebrity’s eXhale bedding including luxurious cashmere mattresses. The clever storage and space-saving details from Celebrity Edge will be incorporated, too, along with RFID locks and pervasive Xcelerate and Bluetooth capabilities.

Celebrity's whimsical restaurant Qsine will be going fleetwide. That will be home to the brand’s virtual Le Petit Chef experience, created by Skullmapping and presented by TableMation; It's already on two ships and soon will be on three (when Celebrity Edge debuts in November).

'Our guests love it,' Lutoff-Perlo said. 'It's getting standing ovations. We're doing double the covers in the venues with TableMation.'

In addition, Oceanview Café will be redesigned with an open, airy, marketplace-inspired arrangement offering islands of choices, while the Millennium-class main restaurants will undergo a redesign, with new textures, finishes and lighter colors.

Bars and lounges will get a fresh look, including the reimagined Passport Bar and an expansion of Celebrity’s popular Gastrobar concept, serving more than 40 craft beers, creative cocktails and gourmet comfort food.

Upgrades will be made to other public venues such as The Hideaway, Team Earth and The Library.

Further changes in store include a new, more contemporary look for the spas and the extension of the SEA Thermal Suite, debuting on Celebrity Edge, with such experiences as the crystal room and the salt room going to other ships.

Echoing the retail aboard Celebrity Edge, new retail across the rest of the fleet will include sought-after brands and designers, such as Shinola, John Hardy and Hublot. Lutoff-Perlo said John Hardy will have an exclusive area with space to tell his inspiring story (the Bali-based jeweler is committed to sustainable practices including using 100% reclaimed silver and gold and ethically sourced gemstones, and supports the landscape with efforts like planting bamboo seedlings). Shinola, Lutoff-Perlo added, is a 'wonderful, progressive brand' and Hublot is a 'good partner.'

The latest digital photo galleries that make browsing vacation memories a snap will be available via Image, Celebrity's photography concessionaire.

First to undergo the work will be the oldest ship, the 2000-built Celebrity Millennium, during a 35-day Singapore drydocking in January, followed by a 28-day docking for the 2001-built Celebrity Summit at Grand Bahama Shipyard in February.

Converted Silver Wind to debut in May, not for Antarctica
Nov 19, 2021