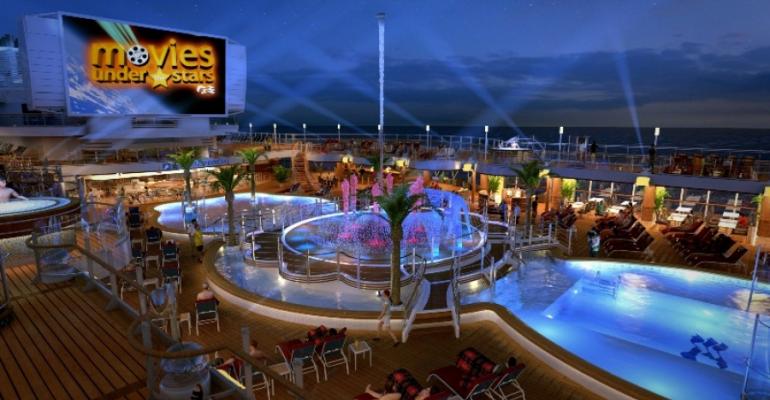 Canada-based Crystal, specializing in water feature technology, has revealed more about the ‘double use’ water features that have been commissioned by Princess Cruises to appear on Royal Princess and Regal Princess(reported here earlier).

The theatrical open air fountains are being installed on the lido decks of both ships, and will act as focal points on an island between two swimming pools.

During the daytime the island will serve as a sun lounge area for passengers, but at night the fountains will be activated, transforming the area into an interactive entertainment spectacle of water and light shows.

Passengers will be able to walk over the fountains’ water jets, to ‘play’ among bursts of water and light. For each fountain Crystal is providing 85 water jets, including Dynamite Blast jets, Burst jets and Stream jets, as well as an array of advanced submersible LED Lights and 66 innovative Choreoswitchâ sequencing devices.

Rob Mikula of Crystal, who is working on the design and installation of the fountains said: ‘These fountains demonstrate the tremendous versatility of modern water features.  Not only can they be entertaining, they can be tailored to suit a destination’s specific requirements and are also capable of transforming between uses.

‘Fountains of this kind are still a new concept on cruise ships so we are enjoying being involved in this ground breaking area.’

In 2009 and 2010, Crystal assisted aquatic designers Fluidity Design in creating visual magic with water and lights for the AquaTheater, designed by Wilson Butler Architects, on board Royal Caribbean's Oasis of the Seas and Allure of the Seas.