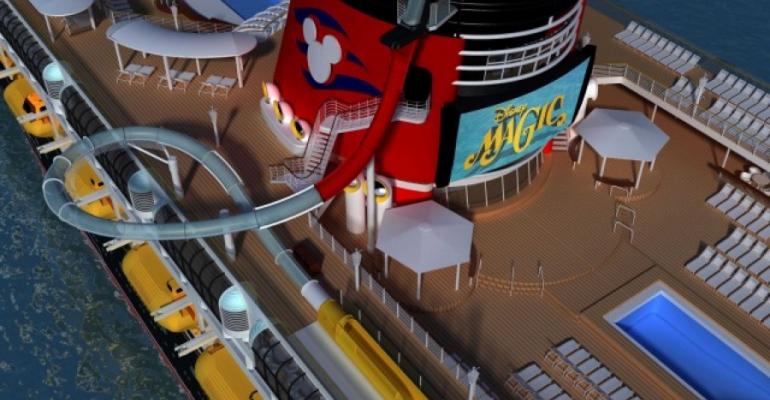 New AquaDunk thrill slide
The 1998-built Disney Magic will be getting a new grand atrium lobby, a children’s area with Marvel super heroes, an expanded spa and a three-story water thrill side. These are just some additions planned during a more than four-week ‘reimagineering’ drydock this autumn at Navantia Shipyard.

Disney Cruise Line president Karl Holz said the work is ‘another step forward in our commitment to delivering the absolute best family vacations at sea.’

The drydock in Cadiz is scheduled for Sept. 7-Oct. 10.

Disney Magic’s grand atrium lobby will be redesigned as ‘elegant art deco, inspired by elements of the sea,’ according to Joe Lanzisero, senior creative vp for Walt Disney Imagineering.

The three-deck lobby features hand-tufted, custom-made carpet in a palette of coral, blue and aquamarine seashell-inspired designs. The art deco chandelier is inspired by rays of the sun. Opulent furnishings, a grand piano and giant portholes recall the days of early 20th century ocean liners. The statue of ‘Helmsman Mickey,’ which has stood in the atrium since the ship was launched, will get a make over.

Disney’s Oceaneer Club, open to 3- to 12-year-old children, is completely re-imagined. With Marvel now a part of the Walt Disney Co., this will mark the first time the super hero icons of Marvel join a DCL ship.

Joining the Oceaneer Club is Marvel’s Avengers Academy where young crime-fighters will be transported to a high-tech command post used by The Avengers for missions and operations training.

Adjacent to Marvel’s Avengers Academy is Andy’s Room, where stars of the Disney-Pixar ‘Toy Story’ trilogy come to life in a multi-level space stocked with Andy’s favorite toys such as a larger-than-life Mr. Potato Head.

Next door is Pixie Hollow, the land of Tinker Bell and her fairy friends, with a costume closet and crafts space. Also new in Disney’s Oceaneer Club is the Mickey Mouse Club, a crafts  and games room splashed with Mickey’s signature colors of red, yellow and black.

Disney’s Oceaneer Lab, also for 3-to-12-year-olds,  is a new pirate-themed area with an animator’s studio, a pirate workshop and lab for experiments and art projects, along with Navigator Simulators.

The new It’s a Small World Nursery is for infants and toddlers.

Disney Magic’s upper decks will get a three-story water slide and a Huey, Dewey and Louie-themed toddler splash zone. The AquaDunk body slide begins with a surprise launch as riders step inside a translucent tube and await the near-vertical launch when the floor beneath them opens like a trap door. The drop sends riders through a clear tube that extends 20 feet over the side of the ship.

Other new deck areas include AquaLab, a water playground open to kids ages 3 and up, with pop jets, geysers and bubblers in a 1,800-square-foot space. Tots up to age 3 can play in the new Nephews’ Splash Zone themed on Donald Duck’s nephews, Huey, Dewey and Louie.

When it comes to dining, Animator’s Palate is updated with all-new, animation-adorned walls and larger high-definition flat-screens. The new ‘Drawn to Magic’ experience at Animator’s Palate transforms the restaurant’s black and white ‘blank canvas’ into full color with Disney and Disney-Pixar characters.

Passenger will also have an opportunity to experience the  ‘Animation Magic’ dinner show first unveiled on Disney Fantasy. Diners create their own characters that join an animated show on screen.

A new restaurant, Carioca’s, is named after Donald Duck’s parrot pal in ‘The Three Caballeros,’ Jose Carioca. Festooned with lighted lanterns, the restaurant is designed to be ‘fun by day, elegant by night,’ Lanzisero said. During the day, there’s a festival theme while at night the atmosphere transforms into an after-hours scene of Rio de Janiero. Carioca’s replaces Parrot Cay restaurant, currently on the Disney Magic.

Also new to the ship is Cabanas for casual dining, with food and beverage stations during daytime hours and a table-service restaurant during dinner. It replaces the current Topsider Buffet, and the space is expanding . The total square-footage of air-conditioned will be enlarged more than 3,400 square feet to more than 9,460 square feet and a total of 455 seats.

Fathoms night club will use special effects, lighting and sound to create different atmospheres from early evening to night. A more low-key nighttime experience is Keys piano bar and lounge. O’Gills is an Irish pub and sports bar designed with traditional decor.

The enhanced Senses Spa & Salon is redesigned with a sleek and contemporary style, and expanding by 725 square feet, to a total size of nearly 11,500 square feet. Teeth whitening, a barbershop and the Chill Spa for teens are new.

Another reimagined area, D Lounge, offers a variety of family-friendly games, shows, dances and activities designed for all ages.