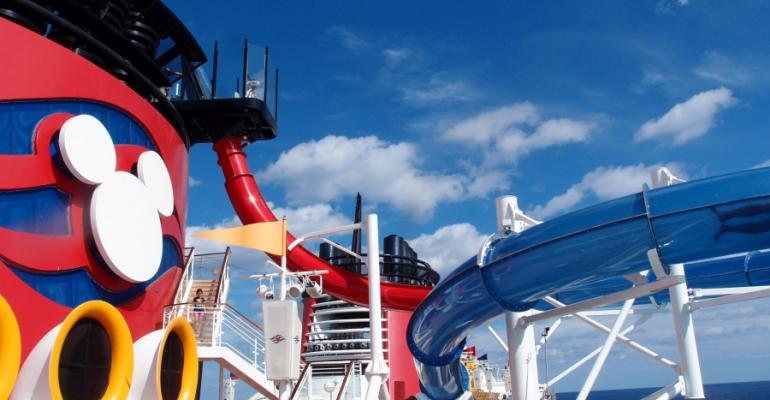 The new AquaDunk thrill slide snakes over the top deck and a fresh 'Drawn to Magic' show is bringing tears to Disney fans in the Animator's Palate restaurant. Crowds are lining up for action shots with Captain America and children are suiting up, via computer animation, as Iron Man in the Avengers Academy, the first manifestation of the Marvel super heroes in the Walt Disney family. The triple-deck atrium lobby is now Art Deco style.

It's all aboard the newly 're-imagined' Disney Magic, which began sailing from PortMiami Friday following Disney Cruise Line's most extensive drydock ever. The more than 40-day project (including the crossing) was carried out in Cadiz, Spain, and has transformed the 1998-built ship.

People have an emotional relationship with Disney so one of the guiding principles in the redesign, according to Bruce Vaughn, evp Walt Disney Imagineering, was 'how we can deepen this relationship' by making things more immersive and interactive.

The biggest challenge, he said, was the overall schedule for what was a very ambitious drydock. All the ship's public spaces, staterooms, back of house areas and crew areas were redone.

The project added superstructure to expand public spaces such as aft dining areas, giving new outdoor seating for Palo, the adult gourmet restaurant, and Cabanas, the reinvented buffet restaurant. The ship gained a ducktail, technology advances and systems such as a new hot water system. Plus, Disney Magic now has a second auxiliary emergency generator to ensure more hotel services can be provided in the event of a power loss.

Rough weather on the Atlantic crossing from Spain to Florida slowed the completion of the work and forced the cancellation of the first post-drydock cruise. Workers were still on board over the weekend, completing various projects.

DCL president Karl Holz said Disney Magic will be fully polished in the next few days. For the most part, things are ready. On the weekend cruise, some bathrooms temporarily lacked hot water, an issue that was fixed, and some decorative elements in spaces like O'Gills Pub (formerly Diversions) were still to be added.

When it comes to the public spaces, Disney Magic seems like a new ship, consistent with the style and some features of the Dream-class vessels.

'The kids' clubs are over the top,' Holz said.

Disney's Oceaneer Club, open to children ages 3 to 12, is completely redone and combines elements of Disney, Pixar and, for the first time in any Disney property, Marvel super heroes. Marvel's Avengers Academy puts kids through operations training and special missions, starting with the chance to suit up (via computer animation) as Iron Man.

Plus, the club is now linked by an inside 'secret passageway' to the re-themed Oceaneer Lab so children can move back and forth freely. Both areas are open to enable larger group activities. The Oceaneer science lab emphasis was replaced with a pirate-themed discovery and adventure focus.

The upper decks are transformed, too. The three-story AquaDunk, entered via Disney Magic's forward funnel, begins with a surprise launch when the floor drops open like a trap door, and riders' screams are heard as they fall and then shoot through a clear tube that extends 20 feet over the side of the ship.

It's different, and scarier, than the AquaDuck water coaster on the newer generation ships Disney Fantasy and Disney Dream. Disney Magic gained an AquaLab similar to the family water fun space on Disney Fantasy, with slides, pop jets, geysers and bubblers.

When it comes to dining, Animator's Palate has the new 'Drawn to Magic' experience where the room transforms from a black and white canvas into full color as Disney and Pixar characters come to life. Diners young and old on the weekend cruise seemed mesmerized by the show.

Holz observed the 'Drawn to Magic' show initially 'touches the parents more than the kids then Pixar comes and the kids light up. It's a very touching, beautiful experience.'

Animator's Palate also has the 'Animation Magic' show that debuted on Disney Fantasy where diners draw their own characters that are incorporated into animation on screen.

Carioca's (formerly Parrot Cay), another of the main rotational dining venues, has been redone as a 'fun by day, elegant by night' space festooned with giant, multicolored lanterns and a Rio de Janeiro backdrop. The dinner menu features South American specialties ranging from black bean soup and Peruvian causa (a savory potato dish) to grilled beef served on skewers.

Senses Spa & Salon, with a style and offerings similar to those on the Dream-class ships, replaced Vista Spa & Salon. The footprint was expanded, too, and now stretches across nearly 11,500 square feet. New services include a barbershop and the Chill Spa for teens 13 to 17.

The new grand atrium lobby, the first thing cruisers see when they step aboard, was redesigned into an Art Deco style, with elements of the sea.

One of the two staircases was removed, and new marble flooring and a custom-made carpet of coral, blue and aquamarine seashell-inspired designs were installed. The Dale Chihuly chandelier was replaced (it's going to the artist's Seattle museum) by an Austrian crystal Deco chandelier inspired by the sun's rays. The silver friezes of Disney characters are now gold to fit the new color palette.