Disney Wish breaks out with new features for all ages 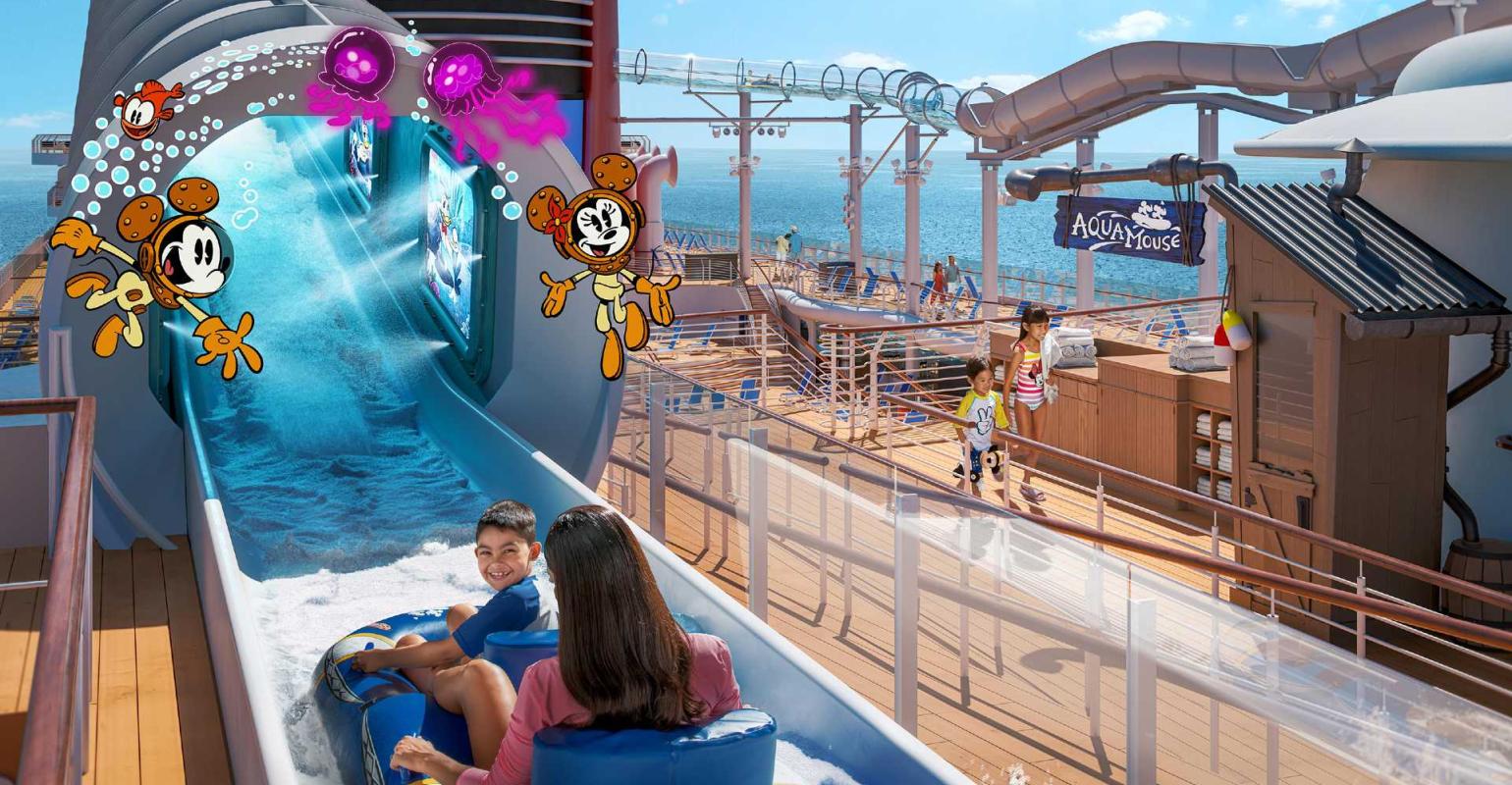 The LNG-powered ship will debut in June 2022 on short cruises from Port Canaveral.

There are two-story royal suites with spiral staircases, three new production shows including 'Aladdin' and new adult spaces including a Star Wars-themed bar.

For the first time, a Disney Cruise Line vessel will have an atrium stage for day-to-night events and entertainment. It's in the Grand Hall, inspired by a fairytale castle with Cinderella references.

And, from there, a 'secret' entrance — a twisting slide — into the Oceaneers Club for kids. (Adults get their own special entrance; 'it's called a door,' Disney Imagineer Sachi Handke quipped during today's design reveal.)

Besides AquaMouse, the pool area will have six pools staggered across tiered decks and including an all-new Toy Story-themed district for families with toddlers and young children. Adults get their own Quiet Cove with an infinity pool, bar and cafe.

The Worlds of Marvel restaurant will see diners play an interactive role in an action-packed Avengers mission that unfolds around them, complete with a menu inspired by the Marvel Cinematic Universe.

The 1923 restaurant is named for the year the Walt Disney Co. was founded. Infused with classic Hollywood glamor, it pays homage to Disney animation with more than 1,000 drawings and props. The menu will highlight California cuisine.

Its decor reminiscnet of a magical forest (think 'Fantasia'), the 1,274-seat Walt Disney Theatre will debut three new productions, one of them, 'Aladdin.' The other two shows are hush-hush for now.

There will be two cinemas (84 seats and 86 seats) to provide more intimate screenings of classic and first-run films from Disney, Pixar, Marvel, Lucasfilm and more.

In the Oceaneers Club (ages 3-12) is a Marvel Super Hero Academy, a high-tech Avengers headquarters where young 'recruits' will train with the likes of Spider-Man and others. And they'll get to create their own uniforms, watching their choices become nanotech forms around mannequins in real time.

Fairytale Hall is comprised of a trio of activity rooms where children get to become part of the fairytale, and Walt Disney Imagineering Lab is a first-of-its-kind opportunity for kids to discover the secrets of Disney Imagineers.

A new entertainment hub, Luna, will transform from a family fun spot by day into an adult-exclusive zone space in the evening. For active play, families can go to Hero Zone, an arena alternating between an elaborate obstacle course and a free-play sports hub.

Adults will get new and expanded areas like the Star Wars-themed Hyperspace Lounge, a high-end bar styled as a luxurious yacht-class spaceship.

When it comes to dining, Disney favorite Palo is evolving to offer Italian dishes plus a steak house selection, while Enchanté will serve a gourmet menu by Arnaud Lallement, the Michelin three-star chef whose Remy is aboard Disney Dream and Disney Fantasy.

Disney Wish has two-story royal suites with spiral staircases and stained glass, and more than double the number of premium concierge staterooms and suites, including Disney's first accommodations located above the bridge. The 76 concierge rooms each sleep up to five people.

The concierge lounge will be more than triple the size of that on other Disney ships, and the adjacent private sun deck has two whirlpools, a wading pool, a bar and lush lounge furniture.

Most accommodations feature Disney's signature split-bathroom concept, with a sink and shower in one room and a sink and toilet in a separate room. All will include a bathtub.

Disney Wish is scheduled to sail its maiden voyage on June 9, 2022, from Port Canaveral, a five-night cruise to Nassau and Castaway Cay. An inaugural season of three- and four- night cruises to the same destinations follow.

Bookings open to the general public on May 27.