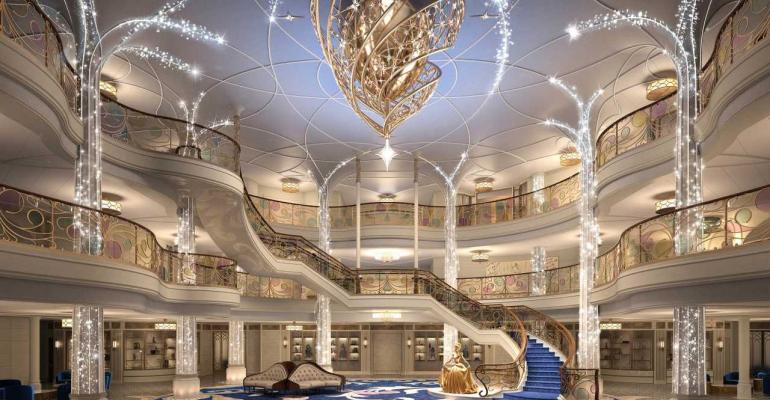 The Grand Hall is a fairytale castle-inspired atrium touched with gothic, baroque and French rococo influences and references to Cinderella

Disney Cruise Line said the motif of enchantment — the heart of many beloved Disney stories — is the architectural and thematic foundation for its new Disney Wish.

On April 29, Disney will hold a grand reveal about the ship, scheduled to enter service in summer 2022, and its itineraries.

'Enchantment is about unlocking the wonder in everything we do and experience,' said Laura Cabo, portfolio creative executive, Walt Disney Imagineering. 'For the Disney Wish, we are creating a signature design language that exudes this emotional magic like only Disney can, by infusing every inch of this enchanted ship with more Disney stories and characters than ever before. The Disney Wish will be a place where families really do get to wish upon a star.'

The line said Disney Wish will have a completely new look and feel.

Walt Disney Imagineers aims to capture the essence of enchantment through three design lenses, using fairytale castles, forests and animals, and the spirit of the sea. A wide range of stories will be represented on board, from Disney and Pixar to Marvel and Star Wars.

Disney Wish will continue the line's tradition of incorporating an elegant, classical exterior design — a tribute to the golden age of cruising — in the emblematic colors of Mickey Mouse.

Captain Minnie on the bow, Rapunzel on the stern

Captain Minnie Mouse will decorate the bow, as earlier reported, while the stern will have a sculpture of Rapunzel, suspended by her golden tresses, and appearing to be 'decorating' the hull with her trusty paintbrush and the help of her chameleon pal, Pascal.

Imagineers have added a whimsical curvature to the deck edge along both sides of Disney Wish to create a sense of movement.

Castle on the seas

The Grand Hall — a bright, airy and elegant space that will welcome passengers as they first step on board — forms the heart of the ship. This fairytale castle-inspired atrium is touched with gothic, baroque and French rococo influences.

The Grand Hall will be Disney's castle on the seas, an enchanted realm where glittering trails of pixie dust climb three-story columns, spill across the ceiling and animate the chandelier above. The chandelier is the manifestation of wishes come true — a swirling spiral of crystal gems punctuated with light, crowned by a wishing star.

Below, at the base of a grand staircase, will stand a personification of Cinderella in bronze, one of many tributes to her story in the Grand Hall’s design. Others include railings that glisten with stained glass in her signature colors, carpeting embellished with icons from the film and nods to her carriage and glass slipper in the metalwork and light fixtures.

The 144,000gt Disney Wish is the first of three LNG-powered newbuilds for Disney coming from Meyer Werft through 2025.

Seatrade Cruise News will be reporting on the April 29 reveal.