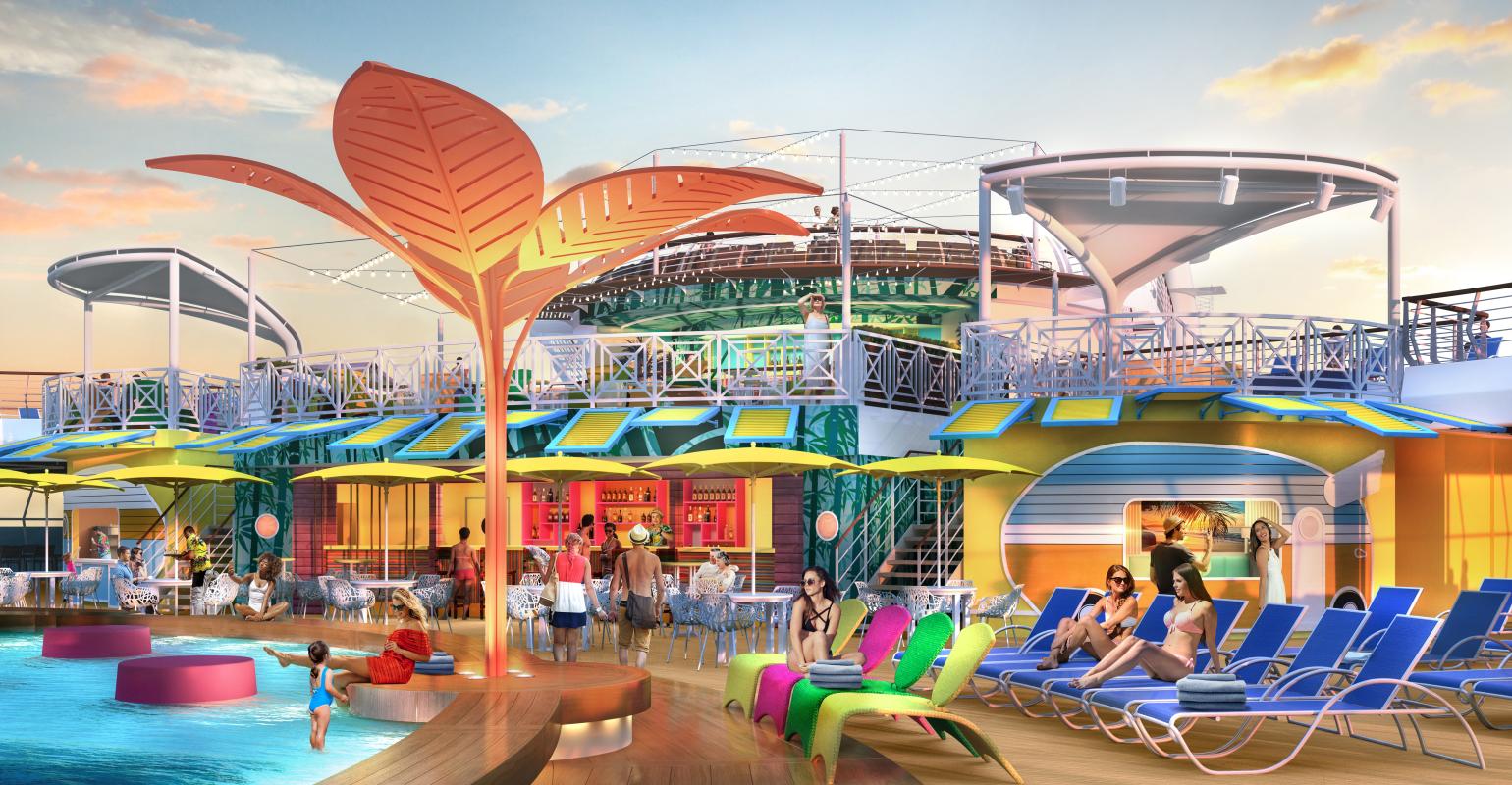 New on the pool deck — the three-level Lime & Coconut will serve live music, vacation-mode cocktails and the best views of the action on board as well as the Mediterranean landscape from the rooftop deck RENDERING: Royal Caribbean

Explorer of the Seas will become Royal Caribbean’s first ‘amplified’ ship to sail from Civitavecchia (Rome) on Eastern Mediterranean cruises in 2020.

During a docking in Brest, France, $110m will go into new thrills, tastes and sights on deck, including The Perfect Storm racer waterslides and a resort-style poolscape with signature poolside bar The Lime & Coconut. As well, the ship will get a fresh twist on Giovanni’s Italian Kitchen and transformed kids and teen spaces.

Beginning May 7, 2020, Explorer will sail seven- and nine-night cruises to Italy and the Greek Isles, including Santorini, Mykonos and Crete.

The 2000-built Explorer becomes the fourth ship in the Voyager class to be transformed as part of the ‘Royal Amplified’ fleet modernization. This more than $1bn investment is updating 10 ships in four years.

Explorer’s top decks will add The Perfect Storm duo of racing slides, Cyclone and Typhoon, with three stories of twists and turns. The reimagined resort-style poolscape brings a wider variety of seating, from hammocks and daybeds to casitas and in-pool loungers. Adults can escape to the rejuvenated Solarium.

The three-level Lime & Coconut will serve live music, vacation-mode cocktails and the best views of the action on board as well as the Mediterranean landscape from the rooftop deck.

New on the dining front

Explorer will expand its offering of restaurants, bars and lounges    with Giovanni’s Italian Kitchen, Royal Caribbean’s new take on its signature Italian restaurant. The trattoria will welcome diners to a casual setting and serve classics with a contemporary flair, from hand-tossed pizzas fresh out of the oven and made to order, to charcuterie delights, with a wide selection of wines and limoncellos from many of Italy’s well-known regions.

A standalone Starbucks will be aboard with its signature menu of drinks and pastries.

Glow-in-the-dark laser tag debuts in Studio B, the venue that doubles as an ice-skating rink. The latest Royal Caribbean challenge, ‘Clash for the Crystal City,’ will bring two clans — the Yetis and Snowshifters — head to head in a faceoff to escape extinction.

The new Adventure Ocean will come to life following a major makeover with an open, imaginative layout for whimsical and immersive activities. Kids 6 to 12 years old can choose their own adventure, while babies and 3- to 5-year-olds get specially designed spaces for each age group.

An exclusive teens hangout will sport a whole new look and features, including the latest in movies, gaming and music, and the addition of a private outdoor deck.

During its time in the Mediterranean, Explorer will be joined by the reimagined Allure of the Seas, an Oasis-class ship that will be cruising the Western Mediterranean from Barcelona.

Following its Europe season, Explorer will set course for the Caribbean. Travelers can choose from five- and nine-night Eastern and Southern Caribbean sailings, round-trip Miami, including visits to Perfect Day at CocoCay.